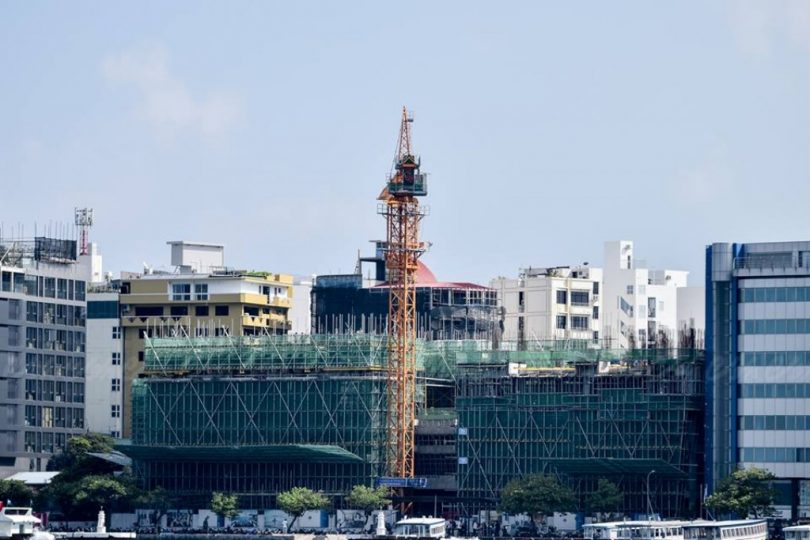 The original Dhivehi article was published on Avas.mv website on 8th April 2018.

During the most exciting times of presidential elections in 2013, PPM’s candidate Abdulla Yameen’s campaign office was established at Nasandhura Palace Hotel, in a vacated room. And for the activities of campaign coordinators and volunteers, a Coordination Centre was established at Nasandhura Palace Hotel’s Conference Hall. And President Yameen’s presidential campaigns important activities were conducted in that building. From Press Conferences to victory celebrations were also held within those four walls. After that when elections were over, around July 2015, Nasandhura Palace Hotel closed for demolition. Soon after, the demolition works began. And the next door, Island Aviation office, was also emptied. No one knew how this project is going and to whom such a project is awarded to. The government didn’t reveal about it but had hidden it.

However, one month later, from neighbouring Sri Lanka, a newspaper reported about the project. According to the information shared by a renowned Sri Lankan investment company, Browns Hotels and Resorts with the media, NPH Investment Pvt Ltd and Alpha Kinam Holding together have planned to invest more than USD 9.5 million to construct a 10-storey hotel on the land plot of Nasandhura. The company revealed back then that, the land will be developed as a four-star hotel, with 150 rooms and 100 service apartments. Soon after, the previous hotel building’s demolition and clearing up work began.

Amidst all this, for alleged attempt to assassinate the president, former Vice President Ahmed Adeeb was arrested and jailed. Then, a special audit report of MMPRC, which revealed many allegations of corruption against him indicated that, the previous agreement made with Nasandhura was terminated in 27 January 2015, and on the same day, agreements were signed to give MMPRC, the land of Nasandhura and next door Orchid Lodge, Henveiru, which was where Island Aviation used to operate. Both properties were then given to NPH, although, not mentioned on the audit report but confirmed at that time. The Auditor General while questioning the validity of the agreement had said, while the land was given for a long period without any acquisition fees payable to the government and only a CSR component was included, and since no details were mentioned regarding the CSR component, a decision has to be made to continue with the agreement.

The police raised charges against Adeeb during January 2016, after investigating the case of the Nasandhura and the adjacent land, and sent the case to the Prosecutor General’s (PG) office. And at that time, Anti-Corruption Commission started an investigation at top speed. 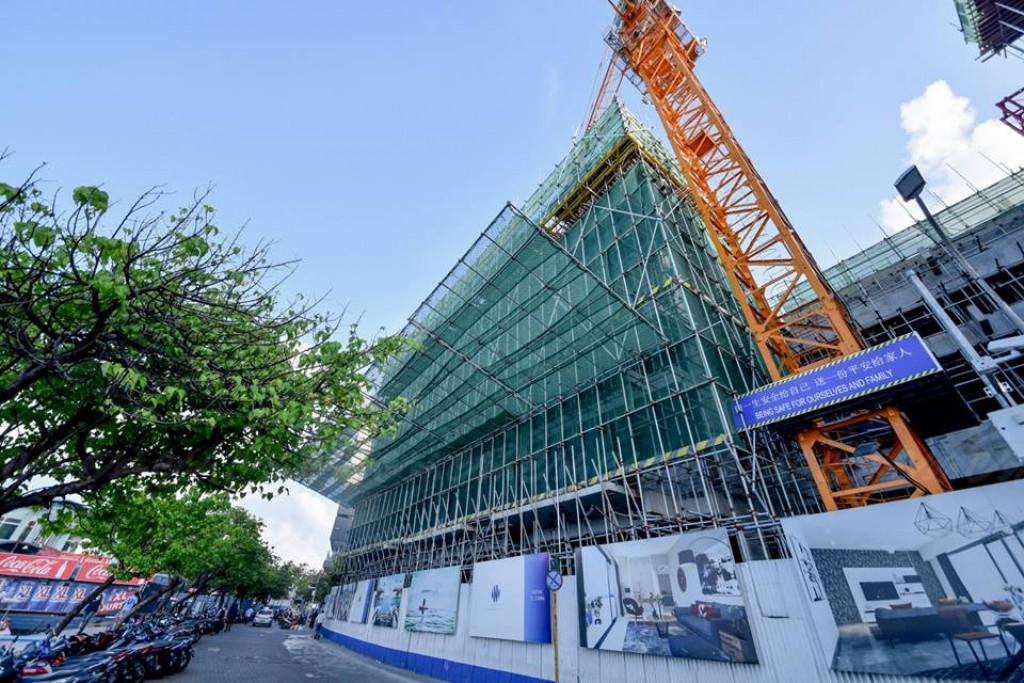 While the case was in PG office, the next scene was a Chinese company starting construction work in May 2016. Although, the citizens witnessed this from their eyes, the government had not uttered a word regarding the project. The public doesn’t know the duration of the lease to a private company of such a big public property. The financial gains achieved by leasing out the property, no other information was revealed. This is where the real question is raised.

No law allows to lease a property from a prime location like in the Malé, without an acquisition cost and for 50 years. The police investigation also revealed that Adeeb had done so, illegally, and an agreement done without a fee, giving the property to a private company, is invalid. However, while the case was in PG office, in May 2016, a Chinese company started the construction work, with the permission from where? Beyond the set procedure, in a way that incur a loss to the government, and which benefits only one party, who gave the permission to initiate construction without terminating the agreement done by Adeeb?? In the agreement done by the government which results in a big loss, why didn’t the Attorney General’s office send it to the civil court to terminate the agreement? And while ACC was investigating the case, before the case was not concluded, on which grounds did the government give the green light to go ahead with the construction works, according to the agreement? These are big questions raised regarding the agreement. 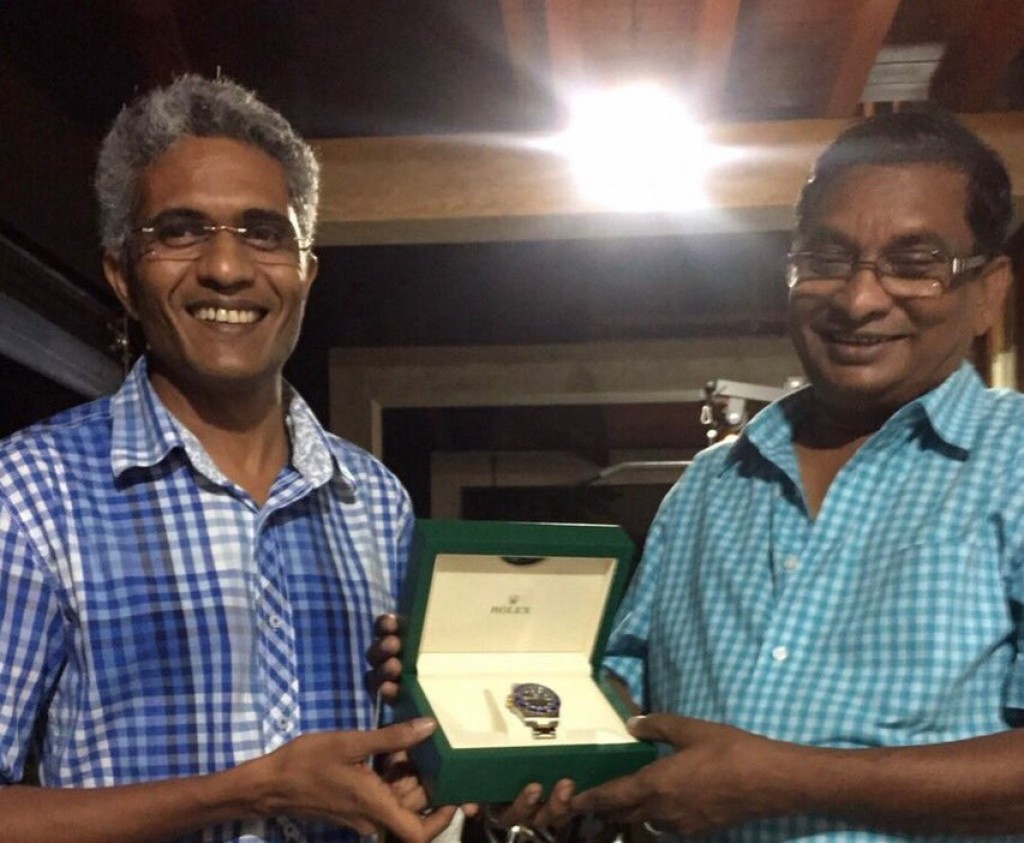 According to the ACC and police investigation, the land was leased for 50 years to NPH, which has an stake by President Yameen’s brother-in-law and famous businessmen Mohamed Manik (Ellaidhoo Manik). And it was revealed back then that Ellaidhoo Manik also has a share in the other local company Alpha Kinam Holdings, which made the agreement with the Sri Lankan company to develop the land.

Therefore, there is room to say that the big picture of the exchanges began during President Yameen’s campaign activities at Nasandhura Palace Hotel. Even back then, Nasandhura hotel was managed by Galaxy Enterprises under an 8-year contract, which Ellaidhoo Manik has a major share. What is the big picture we see, when without a fee, claiming it is under the CSR system, as charity? Is this a gift to a family member?

At this point, the doubts raised about the project are high. The problem was that the government kept saying ‘yes’ to the project that Adeeb made from one of his corrupt deals. No action was taken against the beneficiary of the project, NPH. Prior to the project, even when government got the opportunity to stop it, they didn’t do so. Nevertheless, who are receiving the benefit from the project now? 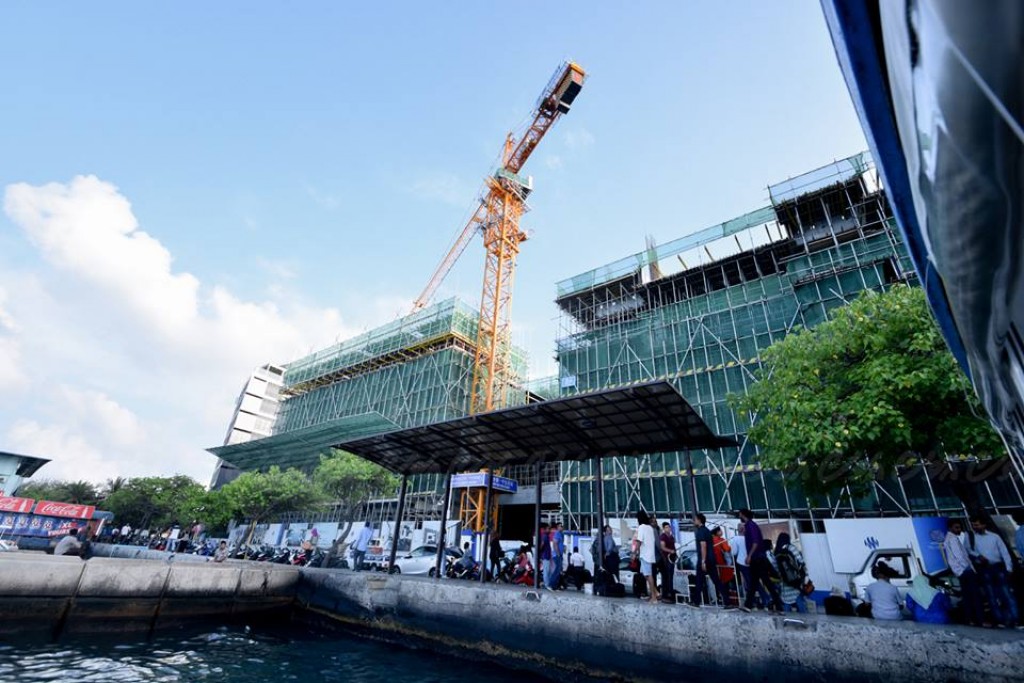 When after ACC’s investigation revealed that the land was given illegally through a corrupt deal, and financial gains came into a company where President Yameen’s family member has a stake, is an undeniable truth. Nasandhura announced to sell 188 luxury apartments earlier and some had even paid for it. The price of the apartments ranges from MVR 7 to 13 million. Even if all the apartments sell for MVR 7 million, the company will make an income of more than MVR 1 billion. Or they might have already received it. And from the hotel, they will receive a recurring income of several billions of Rufiyaa for 50 years. However, when the state has given the land to the company for free, and even when the company that President Yameen’s family member has a share in keeps receiving money from the building, it cannot be stopped. And under the agreement, the CSR work is not yet seen. Nasandhura’s huge project is progressing speedily, why didn’t the project stop at Adeeb and kept running?

Nonetheless, after saying that the agreement’s full responsibility should be taken by Adeeb, finance ministry has ordered Adeeb to pay back MVR 74 million, as a loss for making the agreement. True, if Adeeb had an involvement with it, then he will also be liable to pay it. He also cannot escape from it. However, if some are receiving the benefit from the project even now, without the state receiving any returns from it, in all these days, why didn’t the other party who was involved in the exchanges, also not responsible for it? And why didn’t the government reveal the reason why they continued with the project without terminating the agreement? While all these unclear things had happened relating to this project, and when President Yameen’s family member is a stakeholder to it, by taking action only against Adeeb, can we believe that all the parties involved in the exchanges had been punished? Can these things be stopped by taking action like this? It is the reason why it is said that the citizens won’t believe it. We cannot allow an individual’s company to do whatever to a gigantic public land and that too in a prime location.