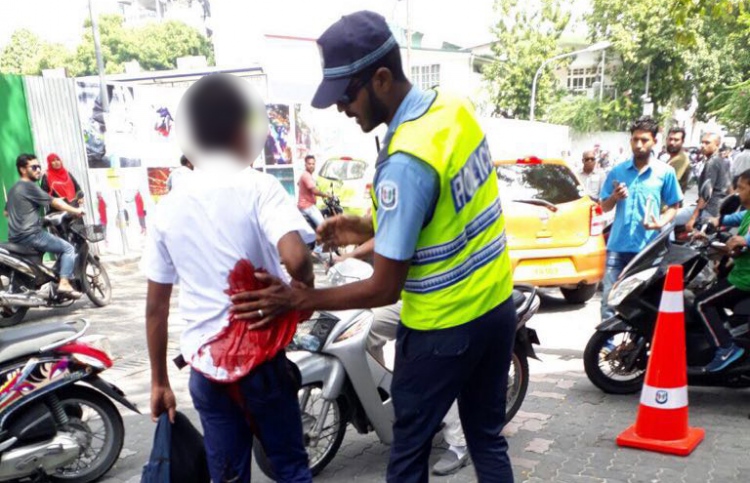 The original Dhivehi article was published on Mihaaru.com website on 25th April 2018

Are we happy with the measures taken to discipline the students in the Maldives schools? Are there work done through the system to reform them? Is the environment safe for teachers? Do the parents who spend enormous amounts on theirs children’s education and sacrifice for them, have hope in the education system?

Even this year alone, 3 chilling major gang related violence had taken place. They are gang crimes. The year started off with the incident of a student being stabbed by a scissor inside a school. Days later another stabbing of a student by a knife happened and all schools were on alert. Followed by parents questioning about the future path of their children. Few days later, 2-3 days ago, because of a Majeedhiyya School student, parents were left furious. The incident gave a very clear picture of how it happened and revealed the status of the school’s. The case of student who attacked was left behind and the teacher who allegedly acted on self- defence was suspended. Doesn’t this give a very dangerous message?

When the case of a violence between a student and teacher surfaced and when the teacher was intimidated by a group, after 12 years of service, the expatriate teacher left Maldives. Prior to his leave, he cried and shared that story. It is believed that he told his friends, that in schools because of some students teacher’s safety is at a loss and life is posed for death.

If he is telling the truth, what is the reality then? If so, why did the school’s situation fall into such a status? When things came to this, was the education ministry and law enforcers asleep? Where was the School Discipline Committee and their regulations?

When looking at the incident of Majeedhiya School, based on the information that had been revealed, the student had a record of violence in school. However, to date, no action was taken. This is the question raised by parents, if a student has been known to behave extremely bad then why was no action taken?

‘Some students do speak inappropriately even in schools. Disturbing other students, harassing teachers and intimidation is not something that the schools are not aware of. The students and parents do share it with the management of the schools. However, except in very few cases, they fail to take action,’ said a parent who had served in a school’s PTA for a long time. ‘PTA’s do repeatedly try to take action. However, because of several reasons the case will be left behind.’

Everyone knows why it happens. Everyone knows that in school’s gang violence is on the rise and that there are those kids who belong to gangs in school and who commit violence in schools between the grades of 6-7. However, schools are forced to not look into the matters of some kids. It is because of the student and the student’s influence. The other reason is because of the dangerous ways things happen in the Maldives society. There is no assurance of personal safety.

‘When considering to think about giving a warning to a student, the student has already threatened with violence,’ a teacher said. ‘We can’t even give a warning with the good intention of disciplining them. It isn’t just the teachers who are in this situation. The schools and education ministry also is amidst this fear.’

‘Look at how they charged in groups, wielding their knives into the school, who is able to say anything at that point now.’

Based on the information gathered from the teachers and police, committing crimes in schools is a common thing. Gangs are formed through schools, they are raised and nurtured, and those kids later had also left the country shocked with gang crimes. Some school kids had also end up dead from gang attacks. From the use of drugs, drug dealing, engaging in inappropriate behaviour to committing violence had become common in schools. The truth is, although, the school principals, teachers and management works hard to teach sincerely, on the other hand, the school environment is becoming into a frightening place. Or, schools had also ended up as gang properties.

What is the solution?

Teacher’s body, Teachers Association’s President Athif Abdul Hakeem said there is no way to freely teach and safety for teachers. He says those things need to be solved by the education ministry.

A crime investigation expert of 19 years in the police said juvenile delinquencies can be discouraged by strategizing a long term prevention action plan. In addition to running rehabilitation programmes targeting such children, legal action must also be taken against those who stay behind and push the school kids into committing crimes.

An expert legal attorney said there are no legal restrictions to take legal action against young offenders. However, because of those organizations who work for children’s rights, the enforcement of those laws do face challenges.

According to a teacher who had worked in the education for more than 20 years said problems in schools multifold and school children end up becoming dangerous, due to inaction at the point where crimes start. The teacher further added, what we are facing are problems that had been there for a long time now.

‘There is no chance to teach the kids who wants to learn. There is no assurance of safety for teachers,’ shared a Dhivehi language teacher in contempt. ‘After saying we won’t leave behind any child and when the offender is left with the rest, it is the adverse effects which we are facing now.’

In relation to the violence cases, education ministry gives a very promising response. The state minister of education Ahmed Shafeeu said within the education system, the priority is given to not leave out the children who offend but reform them. However, if a child commits a criminal offence then actions are being taken.

Shafeeu disagrees with some parents. He said although violence is committed here and there, it is not commonplace. He said schools are safe. Education ministry doesn’t believe school environment is unsafe.

‘We didn’t find that students pose a threat to teachers like that. If they act illegally there are ways to discipline them,’ he said.

To solve school childrens disciplinary issues the education ministry had even come up with a Behaviour Management Policy. Under the policy there are strategic procedures to follow from the moment a child’s issue is first noticed and detailed on how to implement actions.

Shafeeu said in the name of disciplining the students various programmes are conducted and student supporting system had been established in the education ministry.

Teaching students who commits crime in a segregated class is also followed in advanced countries. The expert teachers in the Maldives are also expressing the importance of following such a method.

However, parents and teachers are saying that although rules and regulations are lying on piles, they are not properly enforced. They point to that as the reason why gangs are formed. When you enter into schools and talk to teachers and students, you get a clear picture on how things really are. What’s certain is that behaviour is worse than ever now.

And indeed, I’m just always astounded concerning the remarkable things served by you. Some four facts on this page are undeniably the most effective I’ve had.

Thanks for sharing worthy information. This is really helpful for learning. Keep doing more.