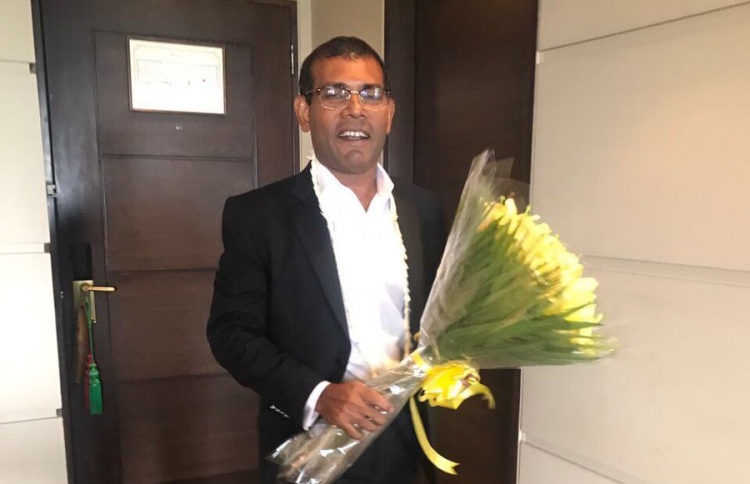 The original Dhivehi article was published on Mihaaru.com website on 26th April 2018

When the current Constitution was adopted, what stood between the 2008 election and former President Mohamed Nasheed was Article 109’s Section Kaafu of the Constitution. The clause which details about the prerequisites of the president, if there is a conviction by a court of law for crimes under the Islamic penal law or deception, deceit, and swindling, then that person cannot contest in the presidential election.

At that time, Nasheed had served a 2 year and 6 months sentence for the conviction of theft in 1999. He served the sentence in Raa Atoll Angolhitheemu Island. That was for the crime of stealing items from former President Ibrahim Nasir’s former residence Velaanaage. At that time, Velaanaage was taken over by the government and declared as state property.

Stealing is a crime in which there is a Hadd in Islamic Law. From the Holy Quran, it clearly states to cut off the perpetrator’s hand. However, the Hadd can be enforced under certain conditions.

Therefore, when the presidential election was announced, a private individual filed a case in Supreme Court requesting to declare that Nasheed cannot contest in the election. That case was based on the conviction of theft from Velaanaage.

Back then, the political scenario was not leaning favourably towards President Maumoon Abdul Gayoom’s regime. Without any competition, while he won all the elections and served 30 years, the internal and foreign pressures were very high. 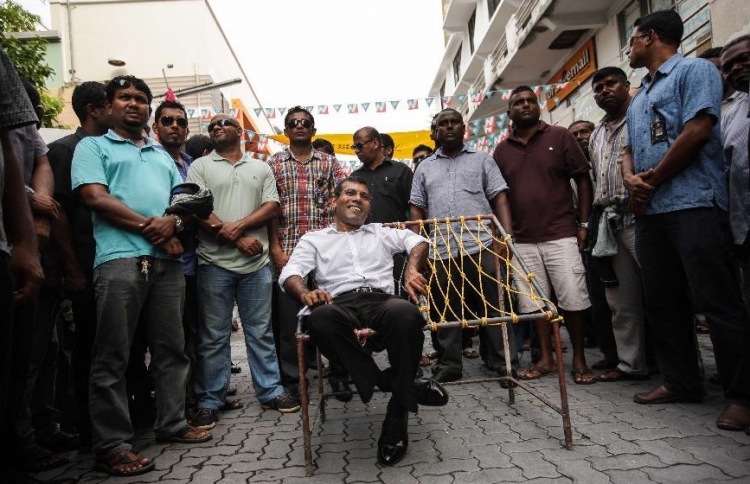 Nasheed with MDP members participating in a street activity

Although he wished for another term, the only way that was possible was for him was to allow a multi-party election, according to the spirit of the new Constitution. Simultaneously, for foreign powers that were pressuring the Maldives to allow their ideal candidate to allow in the election.

Therefore, the Supreme Court looked into the matter and concluded that Hadd is not applicable to the case in question.

10 years later. This time the obstacle for him to contest is the Section Lhaviyani of Article 109 of the Constitution. According to that Article, a person who is facing the presidential election and if that person had been ‘convicted of a criminal offence for more than 12 months, then he must have spent 3 years since serving the sentence or 3 years must have passed from the date of being pardoned.’

Nasheed is even now in a 13-year terrorism convicted jail sentence. Although he had been sentenced on 13 March 2015, he only served a little proportion of his sentence. After serving for 10 months and 3 days, on 18 January 2016, he left to the UK for medical treatment and had been living abroad ever since. 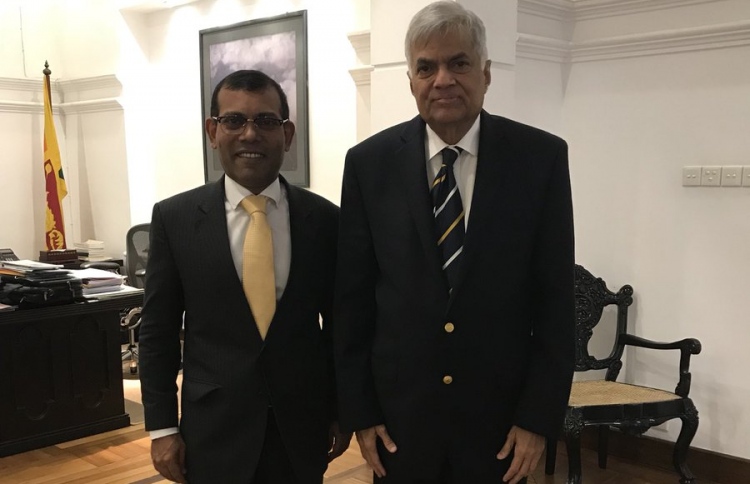 Although many had criticised his sentence, all the legal institutions of the Maldives had maintained the conviction of terrorism and the 13-year jail term. Therefore, all the doors for him to contest in the presidential election had been closed. Except for the door of Supreme Court.

Despite these facts, the opposition does not accept how he had been prosecuted and the nature of the sentence. Similarly, the international committees also rejected it. Therefore, foreign institutions like the Commonwealth, EU, UN Human Rights Committee is openly saying that Nasheed must be able to contest in this year’s presidential election.

There is also another reason to dismiss Nasheed’s trial and his sentence. That is on 1 February, Supreme Court the five judges unanimously ordered the immediate release of Nasheed and other political leaders, all the judges admitted to the misconduct of the trials confirming the allegations made on the nature of the trials.

On the 5th item of the court order, all judges had admitted to 5 things. Those are: 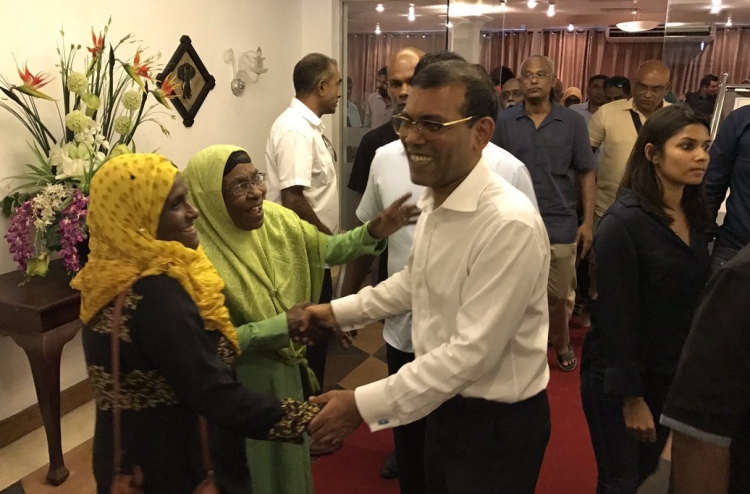 Supporters delighted to meet Nasheed, He met his supporters in Sri Lanka

In that court order, emphasizing on those 5 points the judges unanimously agreed and called to release all the political prisoners, including Nasheed. However, on 6 February, 3 Supreme Court judges unanimously nullified the order released by 5 judges. That is after the State of Emergency was declared and Chief Justice Abdulla Saeed and Justice Ali Hameed were arrested.

The question is, while Supreme Court judges believe in this truth, what will happen if Nasheed knocks on the door of Supreme Court, requesting to allow him to contest? Like in 2008, this time will Nasheed be again bestowed upon a magic wand?

‘I don’t think this time Supreme Court will do such a thing. This isn’t 2008. And this isn’t President Maumoon’s leadership. I won’t say the current leader now will not relent into the foreign pressure that easily. I really don’t think that although the case is filed in Supreme Court, as long as the government is not willing to give Nasheed the chance, that can be allowed through the legal administration,’ said a former MP, who had served for a long period.

‘Although President Maumoon and President Yameen are siblings, they both are very different. They are as different as day and night, how they deal with things. It is difficult to predict what Yameen will do. He is very bold in challenging with foreign political influence. It had also been proven.’

The changes the Supreme Court has gone through because of its current status, following the arrest of Chief Justice and Justice Ali Hameed, is evidence that Nasheed won’t be getting a chance through Supreme Court, the MP noted. 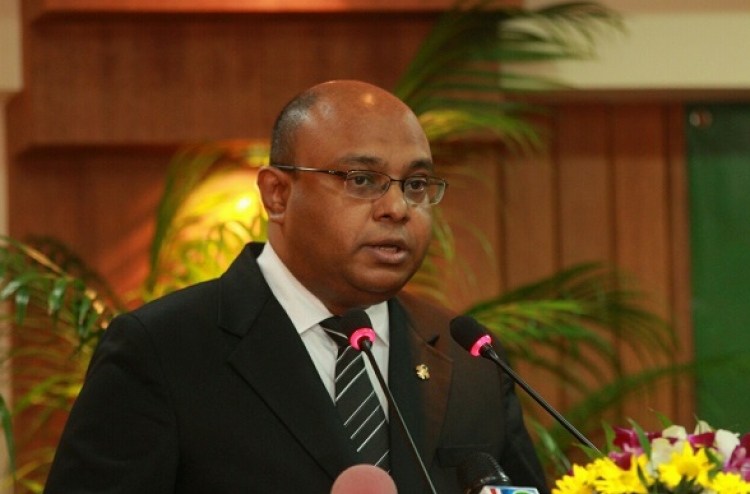 In Spite it being the current political reality, Nasheed will only get to contest in the presidential election if the Supreme Court extends a helping hand to him. However, the judge who gave him that opportunity back in 2008 is also now detained in jail indefinitely, without a trial.

*Hadd – is an Islamic term referring to punishments which under Islamic law (shariah) are mandated and fixed by God.