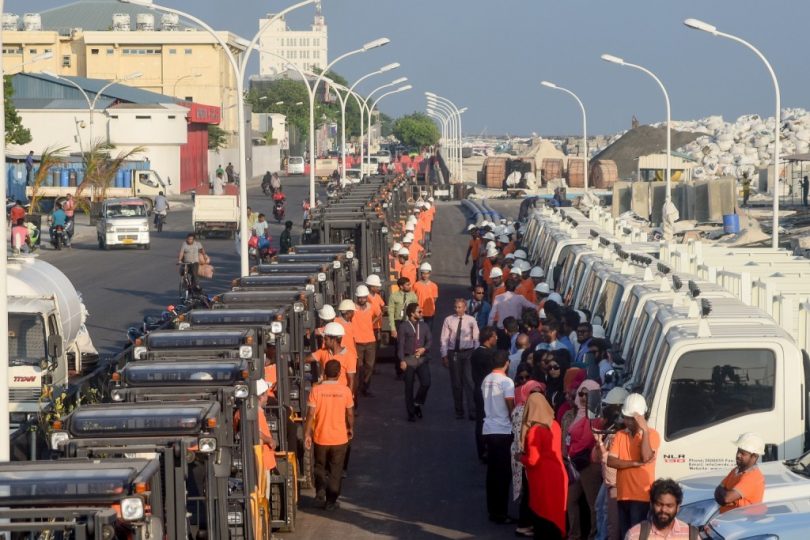 The original Dhivehi article was published on Avas.mv website on 4th March 2017.

It was at end of last year that the government decided to close down Maldives Road Development Corporation (MRDC), which carried out several billion Rufiyaa projects in Malé and in other parts of the Maldives. Government officials have said, the decision made by President Abdulla Yameen was based on the report compiled by the Economic Committee, due to the company’s bad financial situation and being not able not to operate anymore. When taxpayers money can no longer be injected into the company, and when ‘closed’ board is going to be put outside the company, there are many things yet to be revealed to the public. The issue is millions of taxpayers money has been spent on the company. When MRDC has been branded as a corruption ‘nest’ from the very beginning, there are many reasons why the bottoms of those needs to be revealed. Of the million Rufiyaa projects that MRDC undertook, corruption allegations also came one after the another. However, none of those got cleared and now winding up of MRDC company is happening at high speed.

MRDC’s issue became a serious one, during a probe in August 2016 by Maldives parliament’s financial committee following the release of an audit report by Auditor General. The dire situation of the company was highlighted to the committee by ruling party PPM’s Vilifushi constituency MP Riyaz Rasheed. He had said that MRDC is facing great losses and urged that the company’s operation and financial spending needs to be investigated. However, on that day, other than speaking about it, nothing further happened. There were no records to show that MRDC top officials were brought in for questioning and probed further by the committee.

Regarding the 100% state-owned company which was established to do roadworks and road repair works, the auditor general’s report revealed that MRDC’s has MVR 17.8 million as accounts receivable and it remains like that because the company had not tried to recover it. According to the audit report, the nett profit of the company in 2012 fell by 39%, in 2013 by 34% and in 2014 by 41%. The report also highlighted that the company was engaged in building futsal stadiums in islands, waste disposal and selling mined sand, which was not part of the company’s mandate. This report was mainly ignored.

Instead, more big projects were being assigned to the company. Without any care, millions of Rufiyaa was released to the company’s cash flow from the state budget. According to the housing ministry’s audit report released by the auditor general in 2017, from the housing budget, MVR 120 million was released to MRDC, unlawfully. Although the projects they undertook in different islands were incomplete, housing ministry had paid in full. Although housing ministry said it happened with the consent of finance ministry and ACC, the audit report pointed out that it was a lie. 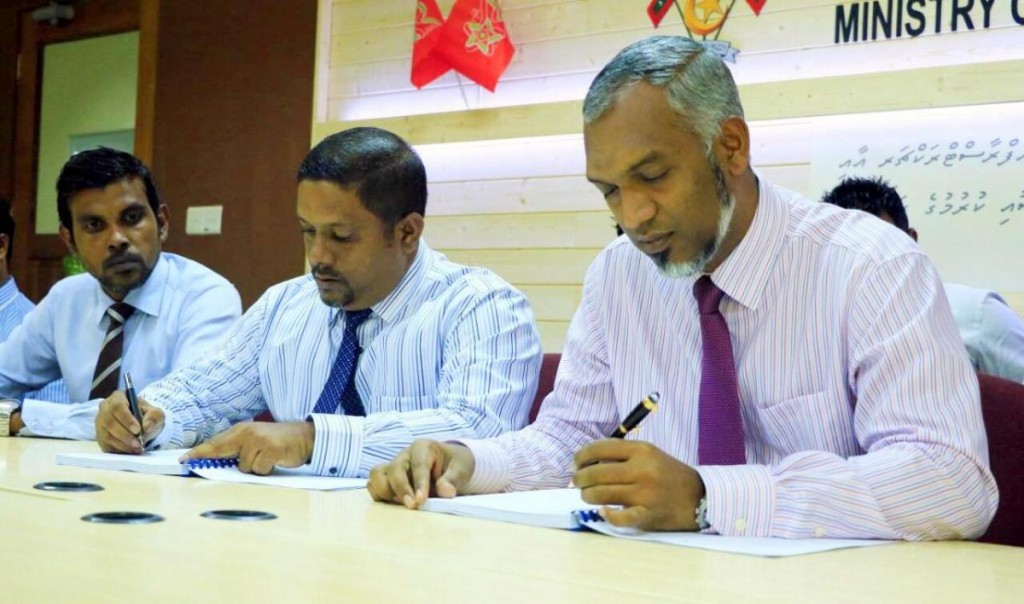 Housing Minister with the former heads of MRDC

While the audit report revealed such issues regarding MRDC, during 2014, a company called Raise Crown was paid MVR 10 million in advance to purchase cement for the company, and despite an agreement made with the company, ACC had probed into a claim regarding the agreement leading to a loss. It was discovered that project wasn’t awarded through a competitive bidding process and when the state-owned public company, STO, was able to supply the cement at a lower rate, the job was instead given to Raise Crown company. After the investigation, ACC had sent the case to PG, requesting to charge against the then Managing Director Ibrahim Nazeem. And Nazeem was removed as the MD of MRDC and was appointed as deputy minister of housing. Followed by the resignation of the chairman of MRDC, Mohamed Riyaz. However, since it wasn’t a transaction carried out only by Nazeem, and saying that charges can’t be raised only against Nazeem, PG threw out the case. After that, without knowing what happened to the missing money of MRDC, the case also fizzled out. Although ACC had advised MRDC to recover the missing money, no one knows at what stage the work of recovering the money is at.

Subsequently, the next corruption scandal of the company that came to the public was in 2017, in the form of an audio recording which surfaced to the public. The alleged conversations between the company’s two board members were regarding, a Thai company called Paragon, who was paid USD 8 million (MVR 123 million) for the project to supply vehicles, which was higher by USD 2.7 million (MVR 41 million), than the lowest bid by another company for the project. However, the company had denied these allegations and it was said that even ACC had also declared there was no corruption involved in this transaction. In that audio recording, both board members had said that the company is conducting corruption as instructed by influential people in the government and claimed that because of that those persons derive outrageous gains from it. Also that company’s audit committee does not look into things and vehicle purchase was not done through a competitive bidding process. 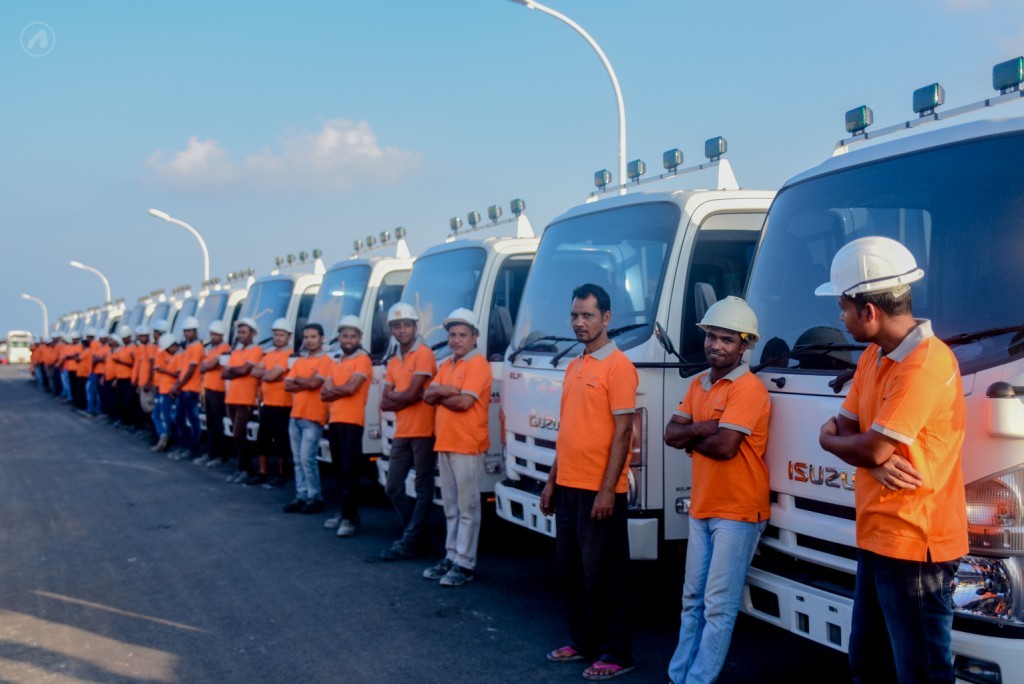 From the MRDC company, labelled as the nest of corruption, these are few corruption scandals that surfaced to the public, it is just a small number. When looked at the big picture, it can be determined that the company had ‘gifted’ money to several entities in a way that creates losses for the company, or in a way that the public does not see the 6 sides of these many activities that the company had carried out in the name of many projects. However, without delving deep into those things, or finding out the real reasons why a corruptive environment formed inside MRDC, now the company is about to be closed. There is a reason to believe that there could be bigger corruption scandals that had taken place within the company. However, the window to investigate those things is now almost closed. After stopping the operations of the company, the staff, the work and tangible goods are now taken under housing ministry’s public works services. and to close the company an auditor had been appointed and that is also taking place. Therefore, a thorough investigation of those big scandals that had taken within the company and if there is money missing, the possibility of finding a way to recover it also highly unlikely.

Moreover, when there are so many staff in MRDC, and when they are all taken into housing ministry, how much of a financial burden would it be to the ministry’s budget? How much of a burden will housing ministry take? Were all the staffs in MRDC taken as needed? When the company is winding down, these are all questions that need to be raised? Answers needed by the citizens.

When information about MRDC is being sought continuously, still, the government is not willing to utter a word on the subject. When seeking information about it repeatedly, they respond saying they will give an answer after checking it up, but instead, everyone leans on the back foot. Apparently, the government wants the illicit dealings that happened through the company to be considered as something of the past and forget them forever. But isn’t it a right of the public to know what happened to their money, when the taxpayer’s money was circulated through the company? By closing MRDC company it doesn’t mean that the many corruptions didn’t happen. And by saying that it didn’t happen, it cannot be allowed to be forgotten forever. And when corruptions are discovered, by saying that that the heads were removed by a company, it does not suffice as a reasonable action.