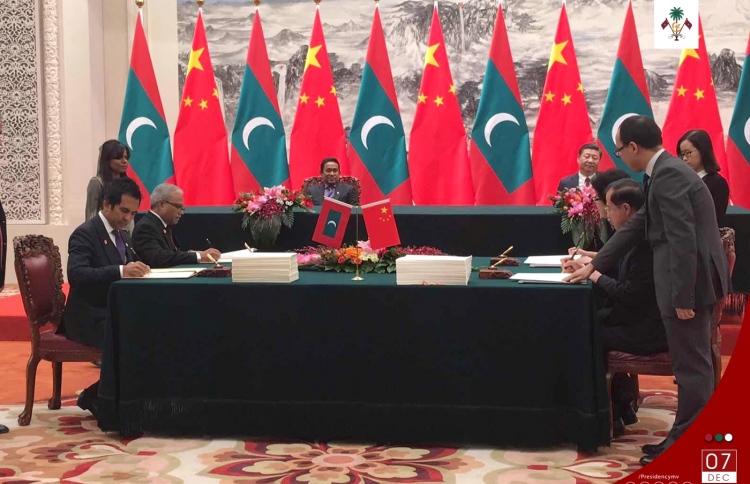 The governments of the Maldives and China signed the long-discussed free trade agreement (FTA) on Thursday.

The agreement was one of 12 key pacts signed between the two nations during president Abdulla Yameen’s current state visit to China. The FTA was signed by the Maldives’ economic minister Mohamed Saeed and China’s commerce minister Zhong Shan in a ceremony held at the Great Hall of People in Beijing.

President Yameen and Chinese president Ji Xinping were in attendance at the ceremony.

The FTA is the result of three years of negotiations between the Maldives and China.

The parliament had green-lighted the FTA with China at a special sitting held in November 29. However, the Maldives’ opposition have greatly criticized the fast-tracking of the FTA through the parliament, noting that the parliamentary oversight committee on national security had approved the FTA proposal within just 30 minutes without proper evaluation and assessment.

Opposition leaders and members, in particular former president Mohamed Nasheed, have also raised fears that entering into free trade with China would push the Maldives into a debt trap. Nasheed had recently declared that the Maldives already owes 70 percent of its foreign debt to China, which gives the global superpower the leverage to undermine the foreign policy and sovereignty of the Maldives. Opposition parties further raised concerns that FTA would open the gates for China to “dominate” the local business trades of the Maldivian people.

The governments of both the Maldives and China have stood up in defence of the free trade pact, declaring that FTA would be beneficial to the peoples of both nations in terms of economy and other sectors.

Economic minister Saeed asserted that the FTA would be most advantageous to the Maldives; he explained that the FTA would lower the challenges faced by fish exporters, enhance the financial sector, and firmly stated that it would not allow China’s entrepreneurs to operate own businesses in the Maldives’ local trade scene which is prohibited under Maldivian law.

Meanwhile, the Chinese government assured that the FTA would be conducive to the sustainable development of China-Maldives bilateral economic and trade relations, as well as to the improvement of trade and investment liberalization and facilitation of the region.

This landmark free trade deal with China marks the first time for the Maldives to enter into such an agreement with an individual country.