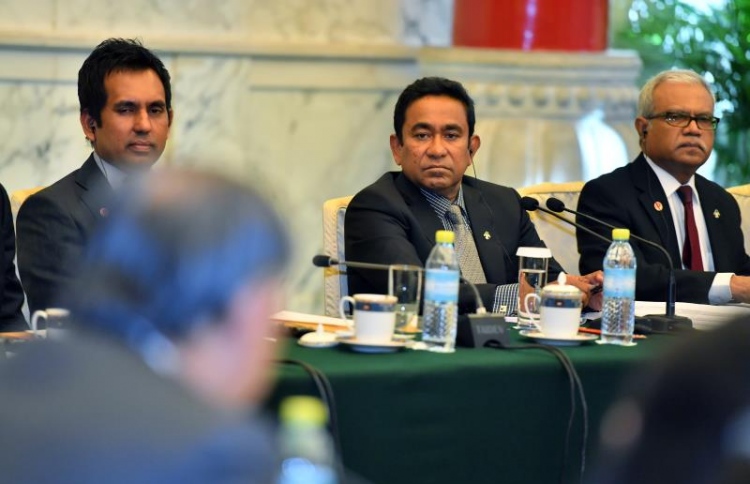 The Maldives on Thursday signed an agreement with China to cooperate with the One Belt, One Road initiative spearheaded by China’s leader Xi Jinping.

The Memorandum of Understanding was signed by the Maldives’ economic minister Mohamed Saeed and China’s foreign minister Wang Yi in a ceremony held at the Great Hall of People in Beijing. The MOU was one of 12 key agreements signed between the two nations, which included the landmark free trade pact between the Maldives and China.

The ceremony was attended by president Abdulla Yameen, who is on his first state visit to China, and Chinese president Xi Jinping, along with top government officials of both nations.

The One Belt, One Road Initiative is a development strategy proposed by Xi Jinping to expand China’s economy. It looks to establish a China-centred trading network that links the economic giant with nations across Asia, Africa and Oceania via land, sea and air. Under the initiative, the Chinese government will undertake infrastructural projects in various countries, by granting loans and other aid for the development of bridges, airports and ports in nations strategically and geologically important to China.

The Maldives has been establishing closer ties with China ever since president Yameen came to power in 2013. China has made a significant number of investments in the Maldives, most notably the development of the landmark bridge between capital Male and airport island Hulhule, and the expansion project of Velana International Airport.

The Maldives is also a member of the Asian Infrastructure Investment Bank (AIIB) of the new One Belt, One Road initiative, which was founded to aid infrastructural development projects.

China’s leader Xi Jinping had announced that his government has allocated USD 124 billion for the One Belt, One Road Initiative. However, India and global superpower USA have objected to taking part in the initiative, claiming that it would undermine the nations’ sovereignty in terms of economic power.