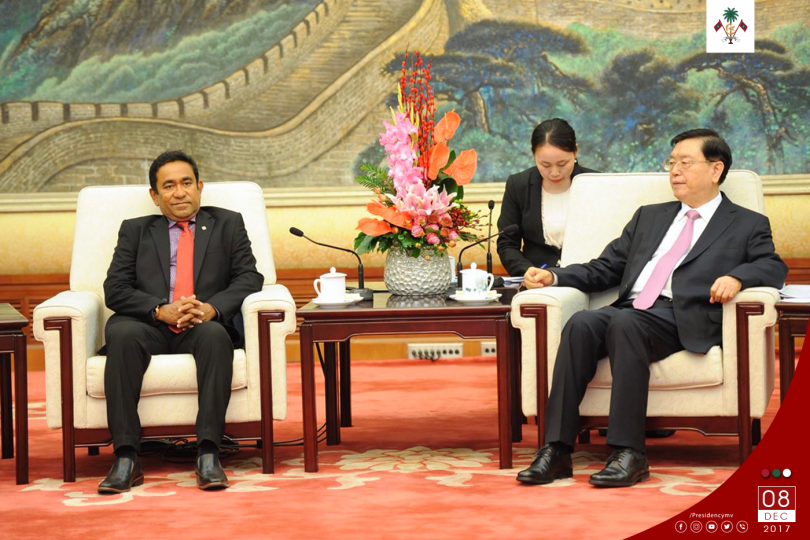 Chairman of the Standing Committee of the National People’s Congress H.E. Zhang De Jiang has paid a courtesy call on President Abdulla Yameen Abdul Gayoom. The meeting was held at the Great Hall of People in Beijing this afternoon.

Speaking at the meeting, President Yameen noted that the longstanding ties between the Maldives and China depended heavily on the excellent working relations among the leaders of both countries. He said that the mutual trust and respect between the Maldives and China paved the way towards greater socio-economic development and people-to-people relations.

Noting that this year marked the 45th anniversary since the establishment of diplomatic relations between the Maldives and China, the President underscored the rapid speed at which the bond has strengthened in all areas of cooperation, especially during the past four years. President Yameen also expressed his gratitude to the President, Government and the people of China for their unwavering support to the Maldives throughout the years.

Speaking at the meeting, President Yameen highlighted the environmental challenges faced by low lying small island nations such as the Maldives, and expressed his appreciation to China for being a strong advocate for the cause, and a good example to the world.

Furthermore, President Yameen described President Xi Jinping’s visit to the Maldives in 2014 as a beginning of a new chapter of a great relationship between a big and small State.

At today’s meeting, the Chairman of the Standing Committee of the National People’s Congress said that despite the differences between China and the Maldives in terms of size, geography, or population, the collaboration between China and the Maldives was a great example to the world, of partnership between a large and a small nation. In this regard, the Chairman noted that the MoU on the belt and road initiative signed yesterday would lead to further business developments, and said that it would act as the new platform to expand relations between China and Maldives. He further reassured of China’s great respect to the sovereignty of the Maldives, and reiterated that China would never interfere with the domestic affairs of the Maldives.

President Yameen and the Chairman also assured of continuous mutual support in the international arena, and bilateral and multilateral fora.

Prior to the meeting, President Abdulla Yameen Abdul Gayoom attended a wreath laying ceremony at the Monument to the People’s Heroes.

The President and First Lady are currently on a State Visit to China, at the invitation of the President of China, His Excellency Xi Jinping. During President Yameen’s State Visit, official talks were held between the Government of Maldives and the Government of China, and 12 key agreements were signed with a view to enhance trade, professional and socioeconomic development as well as technological and other collaborations between the two countries.