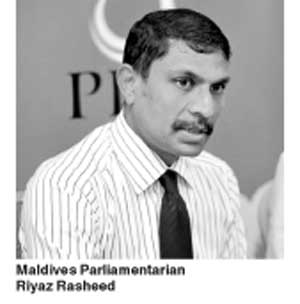 Speaking at a press conference, Riyaz said he was concerned that neighbouring countries were allowing exiled Maldivian politicians to plot attempts to oust President Abdulla Yameen.

“Every Maldivian citizen has the right to believe that the efforts of Opposition figures in Sri Lanka today have the possibility of disrupting our future and our independence,” the deputy parliamentary group leader of the ruling Progressive Party of Maldives said.

“They know very well the tribulations of a civil unrest – they were in conflict for years. Why would they want that for anybody else? But sadly, I think that’s what we’re seeing now – the Sri Lankan Government backing potential plans to overthrow a democratically elected government,” he was quoted as saying.

Riyaz previously accused Sri Lanka of harbouring “coup plotters” in September last year after Government officials told reporters it has no concerns with the activities of former president Mohamed Nasheed.

Nasheed regularly visits Colombo to meet with other Opposition figures in exile. The Opposition leader was controversially jailed on terrorism charges in early 2015 but was granted medical leave in a deal brokered by Sri Lanka, India, the UK and the US.

Rajitha Senaratne, Sri Lanka’s cabinet spokesman told the Colombo Gazette that following his first trip to Sri Lanka since securing asylum in the UK, Nasheed was “raising democratic issues” and could not be seen as plotting to overthrow the Government.

The traditionally close ties between Maldives and Sri Lanka were strained in late 2015 following the arrest of a Sri Lankan “sniper” along with the expulsion of a Maldivian social media activist. In an unprecedented move, Sri Lanka criticised a short-lived state of emergency and warned the Maldives against creating “regional instability.”

In September this year, Nasheed’s high-profile international lawyers expressed concern about his safety after the new Maldivian ambassador to Sri Lanka threatened to detain the Opposition leader in Colombo and return him to the Maldives to serve his 13-year jail sentence.

MP Riyaz, who represents the Vilufushi constituency in Thaa atoll, has a history of stirring controversy with incendiary remarks.

He led calls for the Maldives to withdraw from the Commonwealth and labelled the Queen of England “physically challenged” on national television. In May 2015, he refused to apologise for tweets about prohibiting “islanders” from travelling to protest in Malé. (Colombo Gazette)