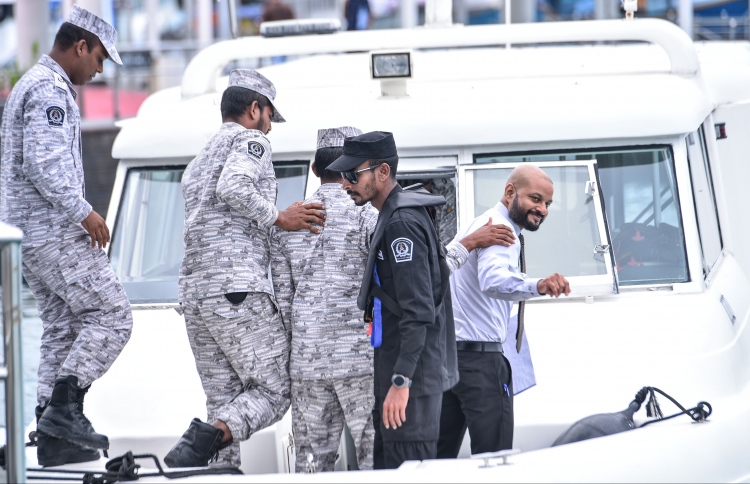 Farish being taken back to jail after court hearing. PHOTO/MIHAARU

Dhiggaru MP Faris Maumoon heavily criticized the government and accused them of obstructing his rights during his court hearing on Tuesday.

Faris was charged over offering bribes to a parliament member. His critical comments during Tuesday’s hearing came after the state shrugged off his lawyers’ concerns regarding the clashing dates on the forensic reports, which were obtained after investigating Faris’ phone. The prosecutors had brushed off the lawyers’ protests, saying that the clashes were typographical errors.

The state had brought in documents that prove the mix-up of dates, and they said they could even bring in the police officer who had compiled the forensic report to confirm that the dates were indeed a mix-up. Prosecutors dismissed Faris’ lawyers’ concerns, when they further claimed that the report could not be accepted as there had been enough time for the prosecutors to alter it. Though this was not the first time the state had been accused of making errors in the evidences they provide, the court had ruled in their favor.

The court has given Faris and his lawyers time to assess the documents submitted by the state today.

While talking for himself, Faris said that every time his lawyers pointed out something, it had been overlooked with the prosecution claiming it to be errors. He went on to say that if things keep going this way, he would not know how to defend himself, nor did he see him getting justice.

Faris accused the government of influencing all the independent institutions. He said that the whole point of keeping him detained until the end of his trial was to prevent him from defending himself and getting justice. He also pointed out that he was not granted enough time with his lawyers.

In response to Faris’ comments, Judge Ali Adam questioned whom his comments referred to. The judge advised Faris not to make claims about injustice while the trial is still ongoing. He added that the courts do not hold trials to serve injustice to targeted individuals.

Judge Ali went on to say that the court had granted the requests of Faris’ lawyers to increase visits, and that Maldives Correctional Service had been ordered to do so as well.

Faris countered by saying that his comments were about ongoing events and that it had not been about a particular person. He said that even though the court had ordered to grant him more time with his lawyers, he had not received the opportunities accordingly.

Ibrahim Shameel of Faris’ legal team added that the forensics team had not backed up any of messages on his phone. Shameel claimed that this was done to avoid coming across any possible evidence that might be in favor of Faris.

Before the hearing commenced, Faris’ team submitted all the pretrial motions in favor of him. A hearing has been scheduled to make a decision on the motions coming January 18.