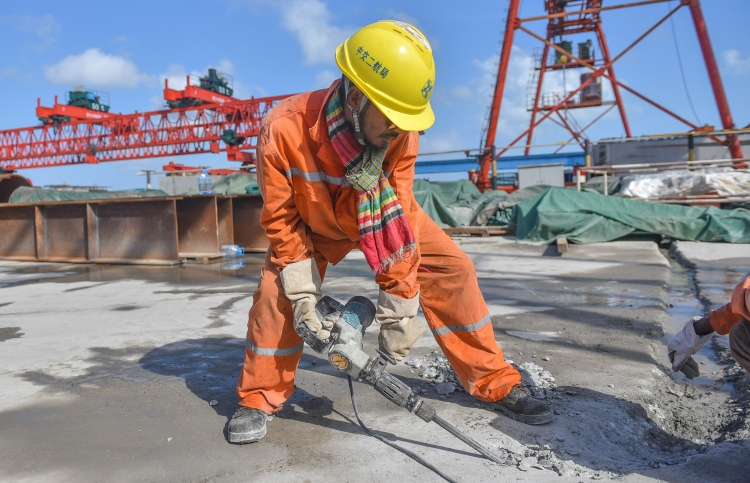 CCCC employee pictured at work on the China-Maldives Friendship Bridge.

Housing minister Dr Mohamed Muizzu on Wednesday announced that all concrete and steel works of the landmark bridge being developed between capital Male and airport island Hulhule will be completed by the first week of July 2018.

He made the remark in a tweet posted after a meeting with CCCC Second Harbour Engineering, the contractor of the China-Maldives Friendship Bridge.

“The project is on schedule, with quality monitored on behalf of [the government of the Maldives] by world-renowned Arup,” he said.

The government had earlier declared that the bridge would be unveiled on July 26 next year, the Independence Day of the Maldives.

The construction stage is currently at the placement of I-beams. According to CCCC, once the I-beams are completed, the deck will be placed and the superstructure, which is being built in China, will be bought and assembled.

The total expense of the project amounts to USD 200 million, out of which USD 116 million is provided as free aid by the Chinese government. China has also loaned USD 72 million while the Maldives’ government is bearing USD 12 million of the project.