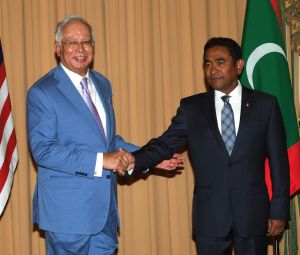 MALE, Dec 20 (Bernama) — Malaysia has expressed the desire to cooperate with the Maldives in the halal industry, particularly in terms of halal food, services and Islamic tourism and finance.

At a joint press conference with Abdulla Yameen after one-to-one and bilateral delegation meetings at the President’s Office, Najib said Malaysia’s halal certification had become the global benchmark.

“We (Malaysia and the Maldives) can cooperate, even exporting (halal products) to third countries. We can also look into Islamic finance as Malaysia is a leader in the sector,” he said.

Touching on the field of tourism, where the Maldives is known to be one of the most popular tourist destinations, the prime minister said Malaysia was impressed with how the Maldives developed its islands despite the challenges of developing so many islands, not to mention the logistics.

Najib said the Maldives had succeeded beyond expectations and had been able to bring in some big names to operate hotels in the island nation and set its popularity as a major global tourist destination.

The Maldives, an archipelago situated in the Indian Ocean, consists of 1,190 islands, Only 195 islands are inhabited and about 90 have been developed as tourist resorts.

“We would like to study how you have achieved that. I hope there will be opportunities for Malaysian companies to partake in the investment of your tourism development,” he said.

On another note, Najib said the Maldives’ validation of Malaysia as the model of economic development was a very strong vindication that the Malaysian government had been doing the right thing.

“(It is a) third-party validator of such importance to us and I’d like to thank you (Maldives President) for giving us the confidence that we are on the right track,” he said.

We agreed to set up an appropriate mechanism that will promote business, trade and investment cooperation as well as enhance collaboration between private sector operators, said the president.

Bilateral trade between Malaysia and the Maldives is relatively small and it has been in Malaysia’s favour.

Touching on the four MoUs signed between the two governments, Najib said Malaysia was committed to rendering assistance to the Maldives in terms of human resources, in particular under the Malaysia Technical Cooperation Programme (MTCP) and in the field of education.

Najib said one agreement signed Wednesday was on training firefighters and continuing to make available places for Maldivians to study in Malaysia because they find Malaysia a very benign and comfortable place and we are offering quality courses at competitive rates.

About 1,700 Maldivians, including 65 medical students, are studying in Malaysia now and the number is expected to increase.

Meanwhile, at a press conference at the Velana International Airport in Hulhule, prior to flying back to Malaysia, Najib said the Maldives president was thankful to Malaysian companies engaged in several development projects in the island nation.

He said Sime Darby Berhad was building a 300-bed private hospital while the WZR Group was putting up an office complex of the Maldives Ministry of Finance.

Although these projects require an injection of an additional US$155 million from the Exim Bank, I will discuss with the bank for the projects to be completed because they are important for Hulhumale, he said.

Najib said Hulhumale, which would have a Youth City, was the new growth centre in the Maldives with housing amenities for the young.