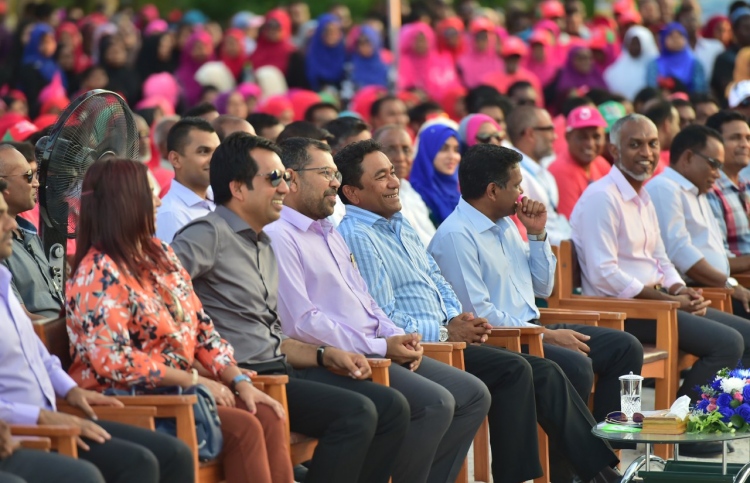 President Abdulla Yameen and some ministers pictured at the inauguration of land reclamation for the airport development project in HDh. Kulhudhuffushi. PHOTO/PRESIDENT’S OFFICE

Speaking to Mihaaru, Zameer revealed that the government’s focus was to complete the airport by mid-2018 and was mulling awarding the project to either Maldives Transport and Contracting Company (MTCC) or Maldives Road Development Cooperation (MRDC).

He also noted that the review process of proposals would be completed this week and the project would be awarded to the company with the lowest development cost.

Zameer stressed that the government would aim to lessen the burden on the state budget, and since both the state companies are capable of the development, the most economical proposal would win the contract.

Kulhudhufushi airport development is to be funded from the state budget but the government has not revealed the total cost of the project yet. The state budget allocated a sum of MVR 283 million for the development of four airports this year.

A total of 15 hectares, six from the Kulhudhuffushi’s lagoon and nine from the island’s wetlands, were reclaimed for the airport development.

Speaking at the ceremony held to inaugurate the land reclamation for the airport project on November 12, 2017, Zameer had announced that Kulhudhufushi Airport would be completed by the middle of this year.