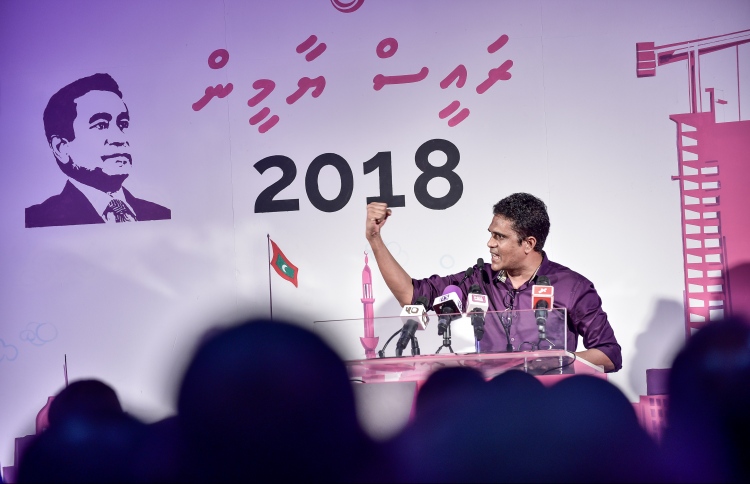 Ruling Progressive Party of Maldives (PPM)’s parliamentary group leader and Villimale MP Ahmed Nihan on Sunday night claimed that President Abdulla Yameen will be re-elected for his second term of presidency in the first round of voting.

Speaking at a PPM campaign hub in capital Male, MP Nihan said that Yameen would make history by becoming the first president to win a multi-party election in the first round of voting, without going for a runoff election.

The prominent ruling party MP had cleverly used the term “ehburun” (which loosely translates to “one round” in Dhivehi) to describe winning the election in the first round of voting, during his speech on Sunday night. This was the campaign slogan used by former President Mohamed Nasheed during his bid for the presidency in 2013.

MP Nihan assured that the party and its “massive following” will work tirelessly to ensure that Yameen won the presidential election this year.

MP Nihan also claimed that during Yameen’s presidency, for the first time in 25 years, the Maldives’ total revenue was greater than its total budget deficit. He had then given credit to the ruling party MPs and Yameen’s cabinet for achieving this feat.

“Bravo and well done!” MP Nihan exclaimed. “This is just one of the reasons why we should vote for President Yameen. During his most recent campaign visit to the atolls, he said that the voter would end up voting for him after seeing the ballot. What this means is that it has become very clear whom the masses would vote for, especially after seeing the progress [of this nation].”

During his speech, MP Nihan listed several reasons why Maldivians should vote for Yameen in the presidential election scheduled for this year. He had even claimed that Yameen was the first president to truly establish law and order in the country.

While the ruling party has officially begun their campaign for the upcoming presidential election, the opposition coalition has not yet revealed who will be competing against President Yameen in the election.