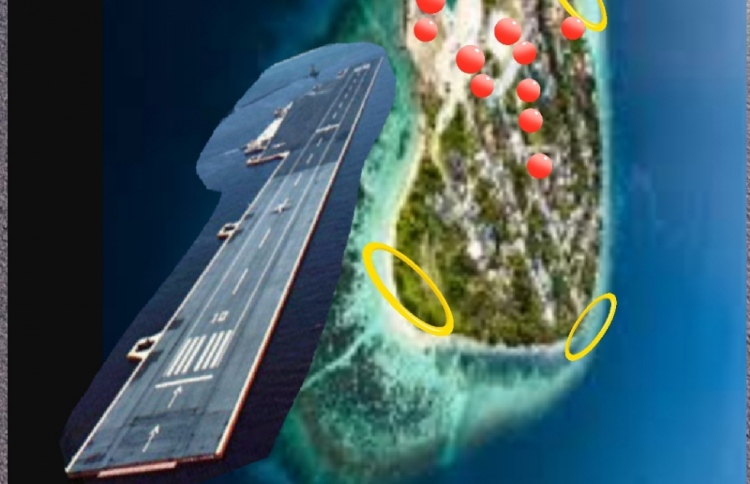 A drawing of the floating airport G.A. Dhevvadhoo hopes to develop by the island.

The council of Gaafu Alif atoll Dhevvadhoo island on Wednesday passed a resolution to appeal to the government to develop a floating airport on the island.

Council president Ahmed Najmeen stated that a domestic airport would be highly beneficial to all the islands of Gaafu Alif as Dhevvadhoo lies in the middle of the atoll. However, the council decided on a floating airport as Dhevvadhoo does not boast enough land area for the project.

“We also don’t want [the airport] in the lagoon, to avoid destroying any natural sites. But developing a floating airport outside of the island shouldn’t be too hard for the government,” said the council, of which main opposition Maldivian Democratic Party (MDP) holds the majority.

Noting that floating airports have been done in the other countries, Najmeen stated that the council is bringing up the matter now as the government is currently in the midst of constructing several domestic airports across the country.

“We want our island to have the first floating airport in the Maldives.”

The council’s resolution also highlighted the progress of tourism in Gaafu Alif atoll, and that Dhevvadhoo is to commence fish exports in the coming year.

Stating that the floating airport is an initiative of the council itself, Najmeen said that they will officially submit the resolution to the President’s Office next week.

Currently, the government is planning to develop domestic airports in the islands of Kulhudhuffushi in Haa Dhaal atoll, Funadhoo in Shaviyani Atoll, Nilandhoo in Faafu Atoll, and Maavarulu and Faresmaathodaa in Gaafu Dhaal Atoll.