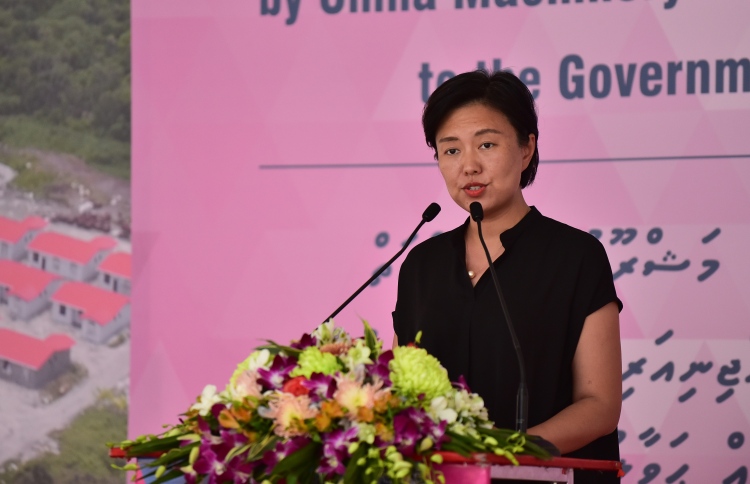 Counsellor Yang Yin of the Chinese Embassy speaks at the ceremony in which CMEC handed over 1,500 flats to the Maldivian government. PHOTO: HUSSAIN WAHEED/MIHAARU

China’s political counsellor Yang Yin vowed that the Asian giant will continue to cooperate with the Maldives in the future, for the benefit of the people of both countries.

Yin made the remark at the ceremony held in reclaimed suburb Hulhumale on Monday, in which China Machinery Engineering Corporation (CMEC) handed over 1,500 housing units it developed across the archipelago to the Maldivian government.

She noted that development and progress are proceeding with haste in the Maldives. Assuring that China will always provide its support and assistance in the island nation’s endeavours, she declared that it will benefit the people of both nations.

Speaking at the ceremony, CMEC’s legal representative Liu Xiaodo stated that it was a pleasure for the company to contribute to the strengthening friendship between the two countries. He said that its natural beauty is the main allure of the Maldives to tourists, and further praised the kindness and hospitality of the Maldivian people.

Xiaodo also highlighted that the Maldivian government is working to bring about positive changes to the livelihoods of the people. He added that CMEC is undertaking another social housing programme in the Maldives.

Meanwhile, president Abdulla Yameen and first lady Fathimath Ibrahim are to depart on an official visit to China on Wednesday. According to the President’s Office, the president will sign agreements with the Chinese government to establish more bilateral relations between the two countries. The Office did not release further details on the impending visit.