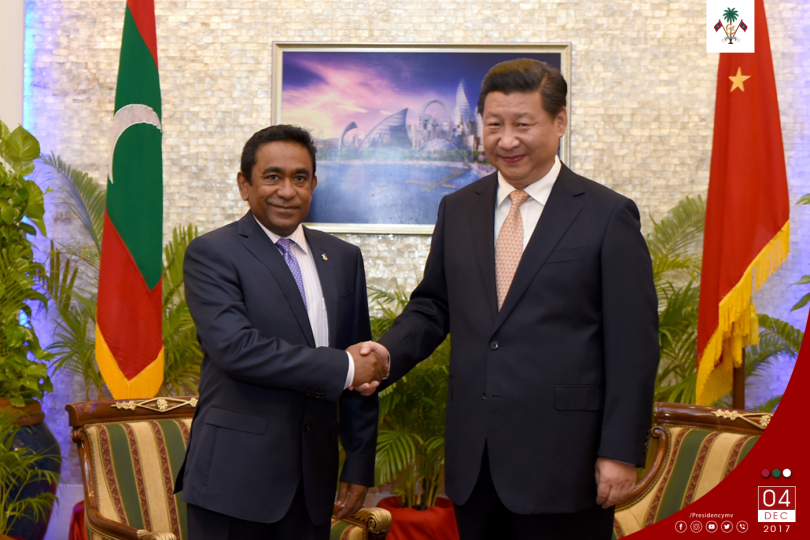 Beijing, Dec 6 China today defended its much- criticised FTA with Maldives, saying it serves the interests of the two countries and the region, as Maldivian President Abdulla Yameen kicks off his maiden visit here.

Yameen will hold talks with his Chinese counterpart Xi Jinping and the two the countries are expected to sign more agreements during the four-day visit which will be closely watched in India.

China’s forays into Maldives, located in India’s backyard in the Indian Ocean has aroused concerns in New Delhi.

The MSR is part of China’s ambitious Belt and Road Initiative (BRI) which includes a maze of roads like the China Pakistan Economic Corridor (CPEC), Bangladesh, China, India and Myanmar (BCIM) corridor, and the MSR.

While India backs the BCIM, it is opposed to the USD 50 billion CPEC and remains silent on the MSR due to security concerns over its impact in India’s backyard.

India skipped China’s Belt and Road Forum that was held in Beijing in which leaders of 29 countries participated.

Asked about the criticism of the Maldivian Opposition parties of the government’s signing of Free Trade Agreement (FTA), Geng said “the negotiations on FTA is important consensus between the leaders of two countries and correspond with the trend of the times”.

He said for a long time the two sides followed the principle of equality and mutual benefit to conduct many rounds of negotiations and at last “we have reached the FTA”.

“It not only serves the interest of the two countries but also facilitate the trade in the region,” he said.

Former President of Maldives Mohammad Nasheed, head of the Maldives Opposition party criticised the China-Maldives FTA, saying that it undermined Maldives’ sovereignty and is bad for the region and leaves the country in debt for China.

Nasheed, who is in London on exile, termed the agreement as “disgraceful” and accused the government of rushing through parliament in under an hour, while the Opposition MPs were summoned to appear in Court.

“This is not in the Maldivian national interest,” he told media in London.

“It will deepen the debt trap to China. Already more than 70 per cent of our foreign debt is owed to Beijing, which gives it huge leverage over us, undermining Maldivian sovereignty and independence,” he said.

The FTA for the Maldives, under which China will exempt its Maldivian imports, mostly fisheries products, from tax.

In turn, the Maldives would waive tariffs on its Chinese imports, the Hong-Kong based South China Morning Post reported.

Also with state encouragement, thousands of Chinese tourists have been visiting Maldives in recent years.

“China is helping the Maldivian government to construct the new city in its capital Male and help to develop its tourism industry,” Hu Zhiyong, a research fellow at the Institute of International Relations at the Shanghai Academy of Social Sciences said.

“This is also part of the Belt and Road Initiative so Maldives could be more involved in the initiative,” Hu said

The Maldives was strategically important to the massive infrastructure project China was promoting, the country’s role as a maritime pivot for the initiative would “strengthen”, he said.