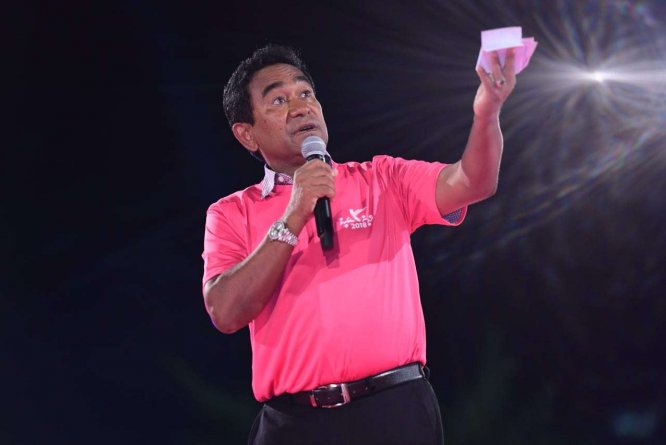 The original Dhivehi article was published on VFP.mv website on 19th September 2018

It is the lingering question of the many – who to vote in the third election, since the introduction of a multi-party system. A question to ponder.

For this reason, we have been observing the rallies of both sides from a distant. Many had been arguing over the meeting of last night as the biggest ever gathering ever held at the capital. The ruling party PPM members had been calling it as a definite turn out of no less than 30,000 people.

Since the party’s candidate was to reveal the party manifesto and the reasons why we should vote for him, we had to check it out. We’ll keep the PPM members speeches and how it was delivered to the public to discuss at another time. When some went on saying ‘Hehehe’ some became confused on the status of the candidate and his wife.

We will now focus on the candidate’s speech at this huge rally. I am a youth. I live in Malé. I am a 30-year old female. Therefore, as a youth and a female, I went to see what PPM was promising for me. He started off saying, ‘President Yameen is aware of the situation of the people’. I also believe very much in electing a candidate who knows what the people wants.

In the talks focussed on youth, he asked himself what the youth wants and answered, ‘Even before marriage every young man wants to buy a mobile phone for their girlfriend.’This is something I quite certainly do not want. I am someone who earns and supports myself. I do not wish my boyfriend to buy me a phone. In a materialistic or money-oriented perspective, this can be considered as a luxury want. This made me feel that such a standard will be considered low for a youth. Perhaps young Maldivian women are not able to afford a mobile phone.

The next line which followed after was, ‘You’re losing your girlfriend because someone else is getting her a mobile phone.’ From that statement, what I and similar women of my age interpreted was that a romantic relationship’s value is around MVR 20,000. Is this the value of a youth as per someone who understands the needs and wants of the young generation?

He next said, ‘Every youngster wants to get out of the cramped Malé city and go over the bridge for a coffee, with their girlfriend sitting behind them.’ This made me sad. I am someone who rides cycle by myself. Even if someone doesn’t take me, I can go to Hulhumalé by myself. Someone who knows the current situation of Malé must know the number of girls riding a cycle in this populated city. And if what all youth desires are something shallow like going for a coffee, I wonder what we are doing working hard every day for.

‘Even if every guy doesn’t earn money to pay their rents, they still want to woo their girlfriends,’ he then said. Which made me a question – While a guy is struggling to earn money to pay their rent, those who had shaped up and who partake in influencing them with such a thinking, keeps on providing with what they want, will there be any who thinks different to such a distorted thinking? Will it be what the youth wish to elect someone who feels that a phone, cycle and a coffee is all that Maldivian youth wants and will be satisfied with?

While concluding the speech PPM candidate said, ‘In which way have I delivered my message for it to be unclear to the citizens of the Maldives? It is not that the message was not understood by the public. We did. It is just that we find it difficult to accept it as what we want as future of the nation.