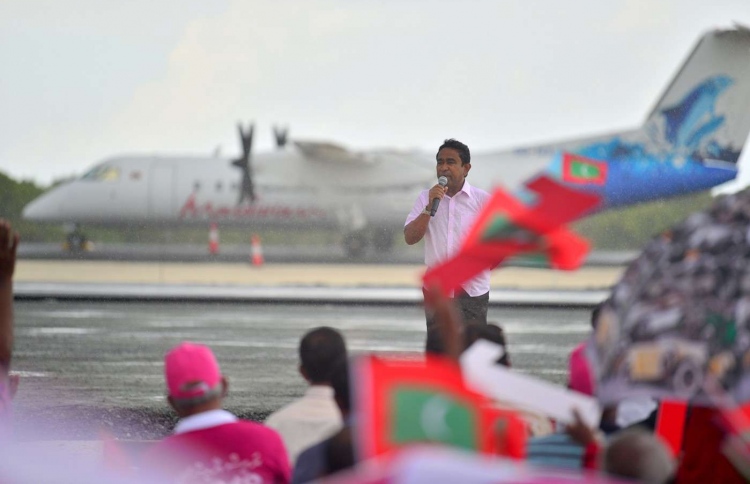 The original Dhivehi article was published on Mihaaru.com website on 25th September 2018

No one would disagree; President Yameen has been an exemplary leader in bringing developments. During his five year reign, he had indeed accomplished so much more in comparison to any other president during their full terms in office. In connection with the development of a bridge, airport, Dharumavantha Hospital, islands harbour, road construction or sewerage and drainage system, President Yameen’s name has certainly made into history. Maldivians do accept that fact.

Perhaps it is for that reason, that when he tried to contest for the second time, President Yameen attempted to ‘sell’ the same infrastructural developments again. He didn’t believe that the people might deserve an intangible thing in place for such ‘concrete developments’. He turned a deaf ear to the calls for the citizens’ human rights, social justice and equality.

And what was the outcome of it?

President Yameen ended up being humiliatingly trounced by Joint Opposition Candidate Ibrahim Mohamed Solih (Ibu) in this year’s presidential election. In Gaafu Dhaalu Atoll Thinadhoo island and Laamu Atoll, where President Yameen spent in billions voted a ‘No’ for his re-election. Except in Meemu Atoll and Faafu Atoll he didn’t get a majority of votes elsewhere. 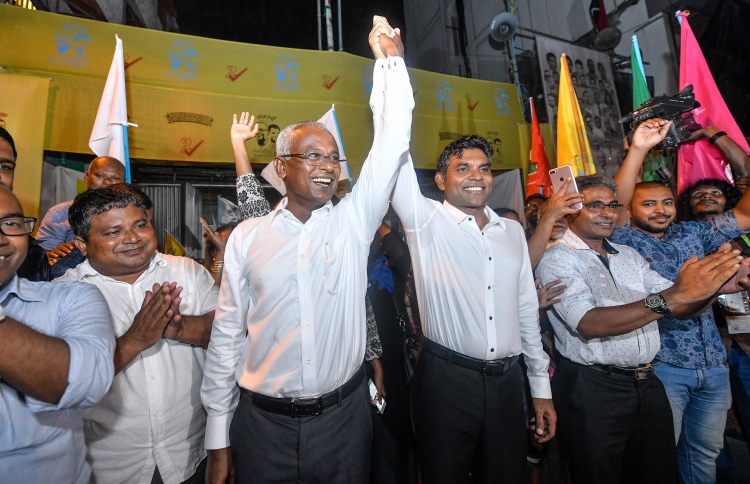 Therefore, in the history of presidential elections held in the Maldives, the difference was vastly different only this time. President Yameen got defeated with a huge margin. The reasons why this happened are plentiful.

The ‘No’ was not a no for development

When President Yameen faced the election, massive corruption scandals were levelled against him and his government. Not just one or two. It was listless. 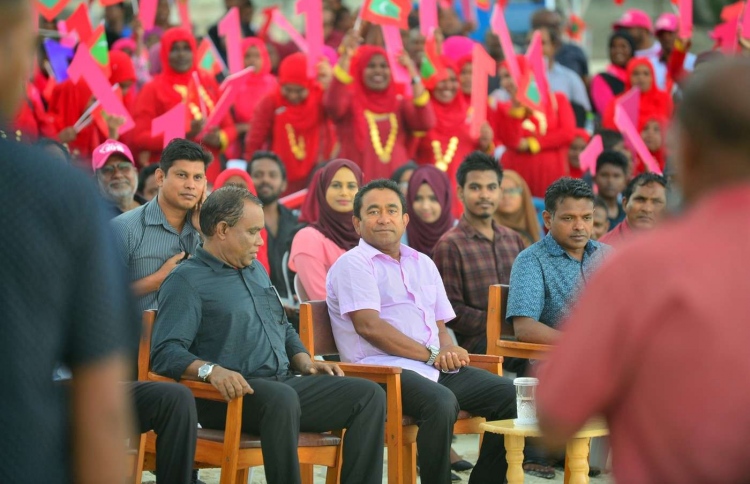 Corruption and embezzlement becoming the norm in the island nation. Shocking extents of betrayals to the citizens. Discriminations, threatening and taking undue advantage. False arrests. Freedom of independent institutions lost and doors to justice closed. Violation of rights ascertained by the Constitution. And closing the doors which can make the government answerable to them. The illegal dismissal of 12 members seats from the parliament. Locking up the parliament.

However, President Yameen refuses to accept any of those accusations. He faced the election without ending his saga of ‘detaining and charging’ all those who posed as a threat to him.

We will leave aside the story of the arrest of dissidents; President Yameen’s half-brother ex-President Maumoon Abdul Gayoom who is 80, is still in the prison. When his health started to become frail and when doctors were called in to treat him, he was still not released. To justify his action he explained at length that his action was him standing within the legal framework. 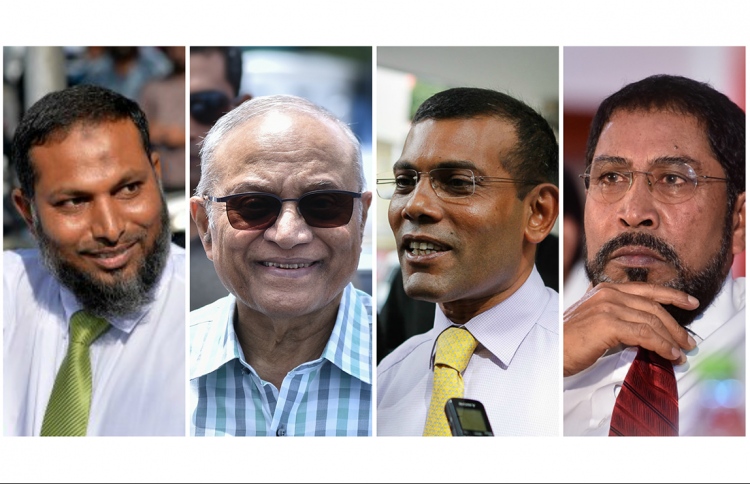 However, he forgot that most Maldivians will not tolerate torture and let others being tortured. They are moralistic, peace-loving, nice people, who look out for each other.

He campaigned with the support of all the forces and powers. He rebutted that torture is not common in the Maldives, kept saying Maldivians were content with developments he brought. He described them by making the whole of the Maldives coloured in pink (denoting to his party PPM) in sizeable rallies. In the long greeting queues of the islands he visited.

‘Let’s talk about tortures in the Maldives. This is something I have to talk about all the time. If torture is commonly present in the Maldives, the locals in the islands like Alifu Dhaalu Atoll Mahibadhoo island will come to me and say we are enduring a lot of pain when I visit them. Every island we visit is not greeted with people who are in pain. They won’t be smiling nor would they come to meet and greet me, if torture is prevalent in an island or country,’ said President Yameen in one of his acrimonious speech to convince the people that torture in the Maldives simply does not exist, during his visit to Mahibadhoo island in the name of celebration of completion of one of his projects on the island.

However, in one of his fiery addresses to his opponents, he has admitted to exerting influence over institutions to pave ways for his selfish sordid gains.

One of them is the unfair dismissal of 12 members from the parliament. He publicly confessed to it. In one of his rallies, he had also proudly proclaimed to obstructing ex-President Nasheed and Jumhooree Party leader Qasim Ibrahim from contesting in the presidential election.

Yameen’s downfall was the way he ruled during his five-year term
‘He masterminded atrocities that shocked the whole nation. Not fulfilling his promises, misusing the Constitution, not regarding friendships and relationships, cutting long-standing ties of Maldives, could have contributed to the stark difference in votes for President Yameen,’ said former Minister at President Office, Abdulla Ameen.

He said, after the implementation of the new Constitution, the people gave priority to human rights and freedom. They said ‘No’ to torture. President Yameen was in denial of that fact.

He still doesn’t believe that; in his conceding speech, he said he brought progress for the citizens, sincerely. And though the citizens didn’t value that, he would still respect their decision. He didn’t apologize to the unconstitutional and unlawful acts he carried out. He dissimulated it all as legitimate and done so within the legal framework.

His PPM seniors also reiterate the same thing. They didn’t lose because they violated the rights of the citizens and tortured them.

‘Those are all baseless allegations and devoid of fact,’ said Ali Arif, MP for Kelaa constituency.

Hence, PPM seniors had embarked to find those reasons. 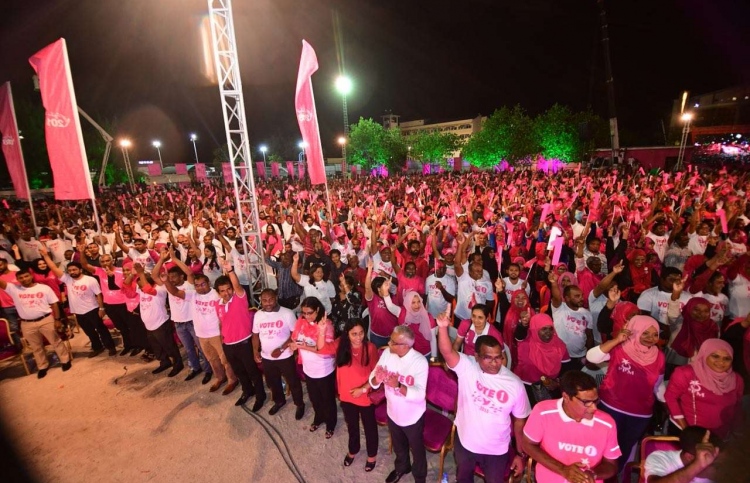 Thousands in a PPM rally

Similar to making claims to win the election with an 80% majority, his close aides will once again go on a reality spinning spree. But now one thing is clear to President Yameen. While he visited the islands and greeted the Islanders, the vote has delivered the message that wasn’t received earlier.

During his government, torture was very well present. All the atolls have given this message.

Although President Yameen and his close aides didn’t accept it, this was the inescapable truth. By prioritizing patience, the citizens taught a valuable lesson. The Maldives said a big ‘No’ to torture and injustice, not to ‘concrete developments’.

Yameen sold Maldives to China or made Maldives to become colony of China. Arrogant approach to the oppositions. He didn’t respect peoples feelings whom voted for him on the previous election. Now he is approaching to court to get out of ppl’s wish to throw him out from the power. He is the worst president in maldives history.

“cutting long-standing ties of Maldives” – substantiate this claim. Don’t you be ashamed to make such baseless claim? With which country Yameen cut the ties? Everyone know who mistreated who in the relationship with India? What is the problem with your cognitive skills? Point no 1. India don’t want Maldives to work with China. period. It is not Maldives dictating to India in Indian affair. Point no 2. India is cared ONLY about its interest And not Maldives. Point no 3. IGNH is the only landmark development India has ever done in Maldives. But that too during Nehruvian India. Nehruvian… Read more »

You think China is deeply concerned about Maldivian interest and they are doing charity….India hasn’t harmed anyone…why u calling urself Mr. INDIA…THE NAME IS A LIE AND SO IS EVERYTHING ELSE MENTIONED BY YOUR