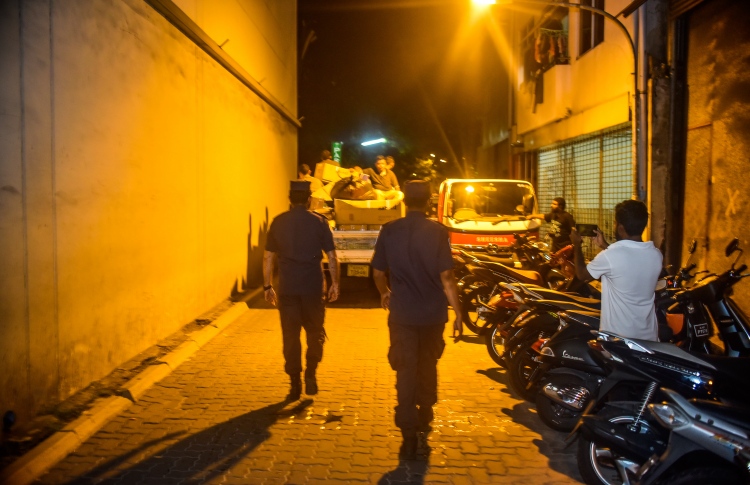 The original Dhivehi article was published on Mihaaru.com website on 30th September 2018

Ever since President Abdulla Yameen lost the presidential election, talks of several state institutions destroying documents have become louder. They are accused of getting rid of evidence of corruption and embezzlement before the new government takes over.

Among these organizations, Fenaka company had been accused of telling their staff to stay out of office after 5 pm. The order came after the unofficial election results were announced last week. Some accused it of ‘getting rid evidence of dirty deeds they had committed’.

‘Earlier staff can enter the office anytime, but now we are restricted,’ said a Fenaka staff.

‘Now that they had lost, the staff doesn’t do as the incumbent heads of the organization say. So now the staff are not allowed to go into their office and from evening they begin their ‘work’.’

Soon after President Yameen lost the election, several lorries full of items were taken out from Muliaage (official residence of the President of Maldives). They were taken to a government warehouse in Lily Magu covered by tarpaulins. When the public gathered there and made noise, the items were transferred to another location. The items discovered were a washing machine, sewing machine and other miscellaneous household items. Some say they were kept in Muliaage to distribute as aid to those who were helping with the election.

President Office Spokesman Ibrahim Muaz denied the claims and said they had been engaged in destroying documents. And those items that had been removed from Muliaage were personal belongings.

Former Deputy Prosecutor General Hussain Shameem said it is a crime under the corruption law to keep personal items in a state premise. Therefore, even if they say that they had removed their personal belongings, it should be deemed as a serious offence and needs to be investigated.

‘It is not something that you can carry in a bag. Those were taken out in 3-4 packed lorries. Moreover, the items that they say are personal belongings, were moved from a state premise to another state premise,’ said Shameem who had been involved in drafting the Maldives penal code.

‘Under the anti-corruption law, they would be liable for keeping and moving personal items between state premises.’

He said that since this is a period that compromising evidence is likely to be removed, police should also be mindful of that. And they must take the initiative and look into these things rather than waiting for someone to reports about it.

‘There is inclination and room to commit a crime. Since thefts rise during Ramadan month, police prepare ahead for it. Similarly, this is an opportunity to commit some crimes. That is why the police must be mindful and work towards preventing it from happening,’ said Shameem.

Amidst the claims of evidence removal, when probed about it, police didn’t respond.

Informed sources say that it won’t be easy to remove records from government offices through the established government system. Like for example, the Government E-Letter Management system (GEMS) was introduced to government agencies, in a digital perspective for government offices to exchange communications electronically. Therefore, all records will be stored inside the system. Any document can be disposed of only through the authorised personnel. It won’t be easy to secretly log into the system. This system had been adopted even by some state-owned enterprises.

Therefore, it is not easy to directly pinpoint which documents were rumoured of being destroyed.

The opposition was not fixated on it without a valid reason. As responses like ‘documents not found’ had come up during auditing of government institutions.

Recently the issue of tourism and Islamic ministry documents not being produced had surfaced. When asked for those documents the response was, ‘Its unknown where the documents are’.

The finance law states that there should be an assigned person who is deemed accountable for the documents of government administrations and state-owned enterprises alike. Prior to this government, the permanent secretaries and company secretaries were in charge of that responsibility. As those were not political posts and they would remain in their posts even during government transitions.

However, in this government that responsibility was passed to political appointees.

‘Financial accountability was tasked to deputy ministers and coordinators. That is the reason why such things are happening. During an audit, observation remains incomplete. Since key documents go missing, thus can’t make them culpable,’ said an expert auditor.

The law states steps to take against destruction of evidence and important documents. The expert said the lack of effective execution of the financial system causes hindrances. One auditor said the solution for that is, the responsibility of the financial regulator is transferred on to non-political appointees.

Amidst the revelation of document destruction, the audit office has called to safe keep all documents relating to state expenditures. In the circular released by the audit office, the documents mentioned were internal memos, emails and minutes.

When every government transitions prompt various rumours. And it is even louder now since the current government has been levelled with a legion of allegations. Therefore, it is imperative for concerned authorities to be mindful and probe into such matters now.