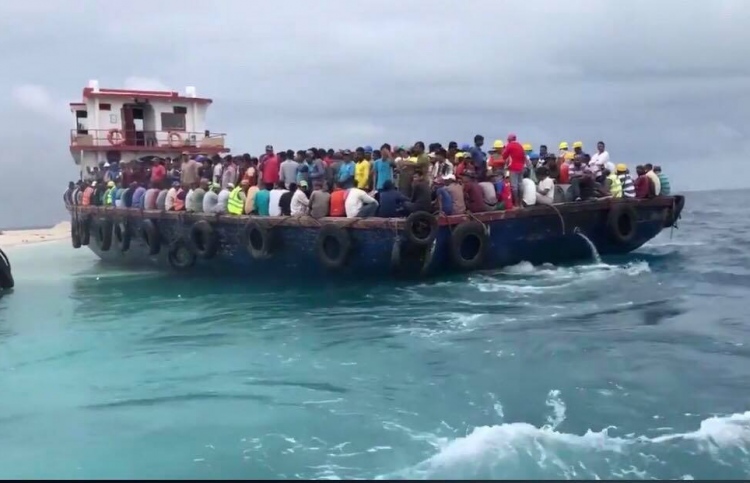 The original Dhivehi article was published on Mihaaru.com website on 4th October 2018

It is a sight commonly found in the Mediterranean sea, where refugees cross the ocean in seek of a better life in Europe. While attempting to cross the ocean in huge dinghies and boats, sometimes end up in tragedy, where the vessel capsize and claim their lives in the process.

However, the above isn’t a photo of refugees making their way to Europe. Those are contract migrant workers taken in a supply vessel to an island *resort work site. They are being transported from a Malé Atoll resort work site to a nearby island situated in the same lagoon.

According to the video that went viral, where some were seated and others standing, in total there were around 200 migrant workers were on it. It is said that it is a ‘five-minute journey’.

After the video became viral, it sparked immediate public outrage. Some felt that it is an act which takes the prevailing discrimination against migrant workers to another ad nauseam level.

According to reactors to the video, a single minute shouldn’t even be spent in a way that puts the lives of many in danger. And since this is against Maldives sea transportation law, many had been calling the concerned authorities to take immediate action against the miscreants.

‘It is indeed an abhorrent act. An embarrassment to humanity. A clear show of grasping desire for worldly things,’ said Ali Didi who shared the video.

‘Even if for a minute, the lives of many are exposed to danger. You don’t know when something awful might happen. If the vessel capsizes in the lagoon, many lives will be lost,’ said a commentator to the video.

While some called it a form of human trafficking, others called it modern-day slavery.

‘This is how Maldives resort owners treat their employees while they develop new resorts. We strongly condemn this deplorable act,’ commented a Twitter user under the name Ishaag Shafeeg.

Some who reshared kept tagging Maldives Police Service and Ministry of Transport Authority (MTA) and asking them if they have not seen the sight. And had been calling them to urgently investigate and prevent it.

When Mihaaru news enquired MNDF about the matter, they said to call Police. The Police administration office didn’t answer to their calls. And MTA said they were unaware of it.

Some who were aware of the resort construction company’s ill-treatment said the company had always been treating their employees like that.

‘When the video went viral, most witnessed the footage only today. However, the company had been in operation like that for a long time. And this is how staff get treated in most resorts in the Maldives,’ said a Facebook user after sharing the video. 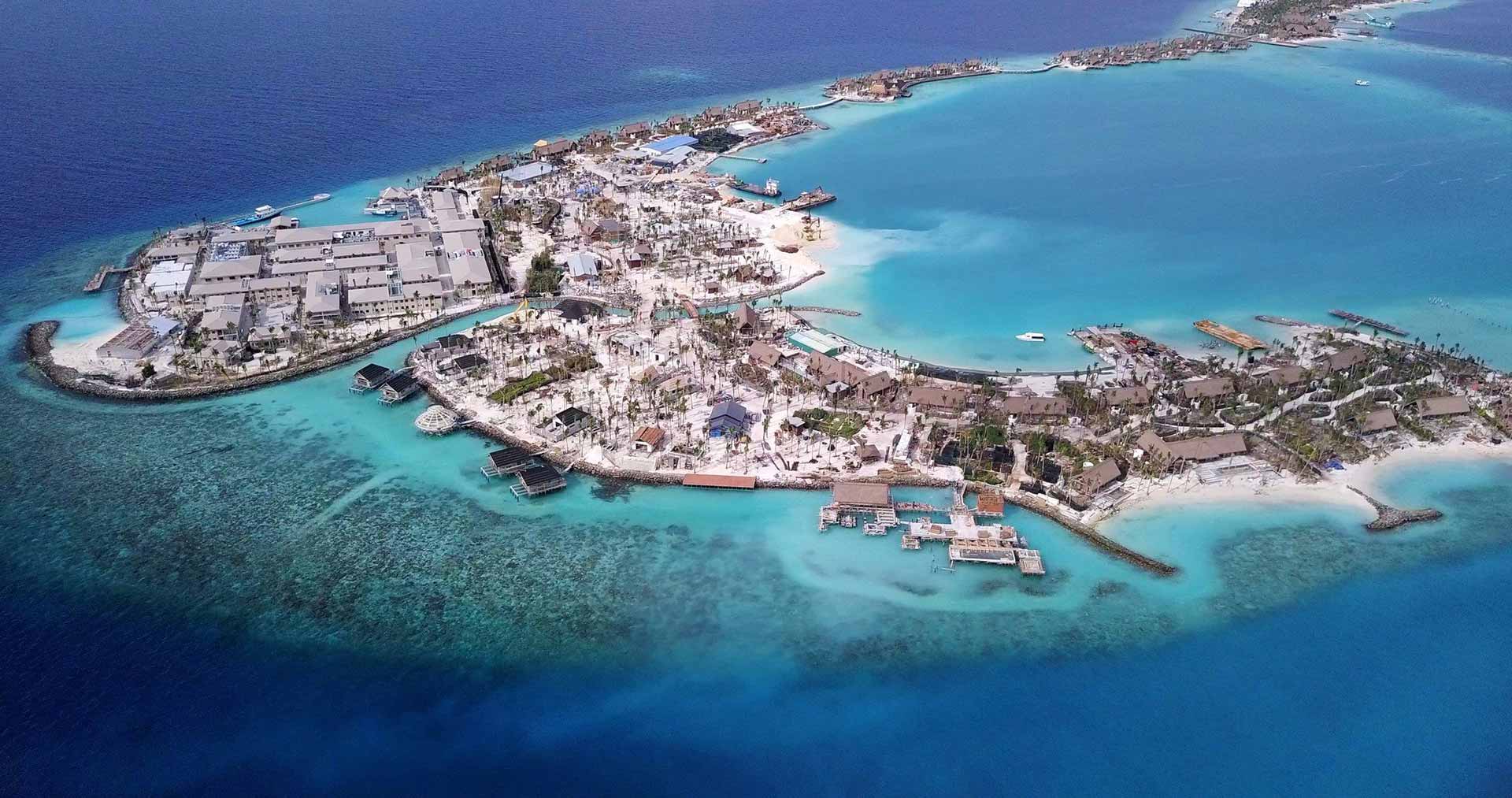 *It is the resort construction project of Waldorf Astoria Maldives Ithaafushi, in a coral lagoon at 4°0’47.62” N 73°22’57.86”E, just over 20 kilometres southwest of the capital city Malé. Which was leased to ASSETS Real Estate Development, a Qatar-based company run by Syria-born brothers Moutaz and Ramez Al-Khayyat. The construction project is undertaken by the resort construction company Hotels and Resort Construction (HRC), owned by former President and current Executive Board Member of MACI, Mohamed Ali Janah.

Maldives Association of Construction Industry (MACI) – MACI is entrusted with the responsibilities of not only ensuring that the industrial, contractual and technical needs of the members are promoted but also with the equally vital task of promoting the development of the industry and enhance the rank and reputation of the members of the Maldivian construction industry to internationally acceptable standards. One of the primary roles of MACI is to look after the interests of the contractors, labourers, employers, employees, the all technical and support staff plus the collaborating commercial and market interests of the construction industry and to generate public awareness for these interests both within the government and among the general public.

The picture of the overloaded ferry is shocking. Clearly safety standards are non existent in the Maldives.
The Indian government should urgently look into the employment conditions of Indian workers. It pains me to think Indian workers are still taking up third rate jobs in fourth rate countries and are being trafficked and exploited by unscrupulous mafiosi employers.

Hahahaha. Joker. India treats its downtrodden much worse than this. In India there is zero respect for the lives of anyone other than Brahmin.