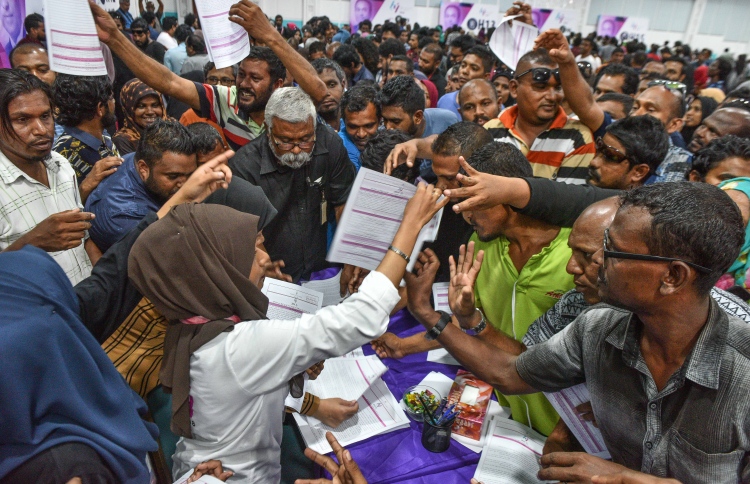 The original Dhivehi article was published on Mihaaru.com website on 2 October 2018

The venue where applications for flats were collected was swarming with people; however, those that were lining up on Sunday in hopes of getting a flat under the ‘Hiyaa Housing scheme’ had no guarantee. Documents in bundles, giving proof of their living situation, they once again came to go through the process because they didn’t want to let this chance also go to waste and stay miserable. Even the mere act of submitting the form is a satisfaction.

That was why many stayed in the queue even at the last minute without a move. There were people who queued up for 12 hours without a break. Their living situation can be seen from their faces.

Most of their lives had been spent on applying for housing. They applied during the reign of Maumoon Abdul Gayoom, Mohamed Nasheed and even in the current President Abdulla Yameen. Instead of an apartment, they were left with despair. 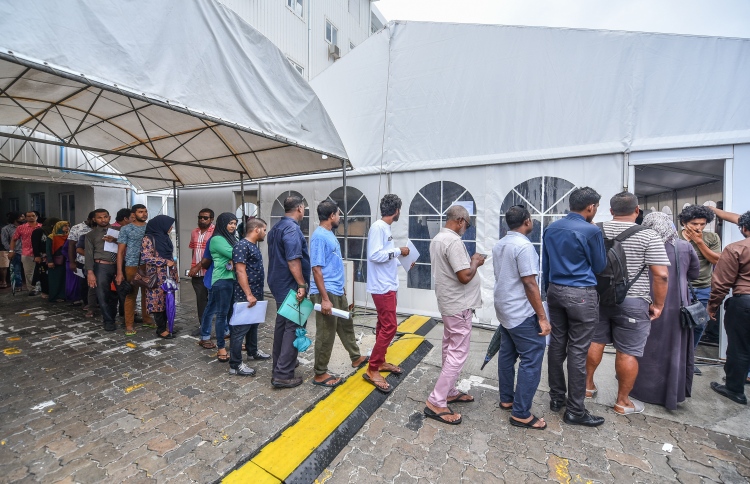 Queues made to submit flat applications

Having forced to spend all their income on crippling rents, their whole life is overwhelmed with anxiety. Unable to make ends meet. There is seems no escape to families living in small apartments shared by 3 or 4 children. To make matters worse, there is major deception when giving out apartments. For political greed, the people are made to suffer. If not there should have been some solution to this problem by now.

‘To own an apartment is not a right for the privileged. Every Maldivian is entitled to have one. However, it goes to those who are closest to the leaders of every government. We are asking for equal treatment,’ lamented Shifna Hassan on Facebook.

Topping the list of promises to deliver of President Yameen was also the provision of housing. With a lot of expectation, 15,000 people applied for the current government’s first social housing project. The complaints raised against the selection of 704 applicants for housing has still not died down. While people who scored higher were there, flats were distributed to whoever they wanted. 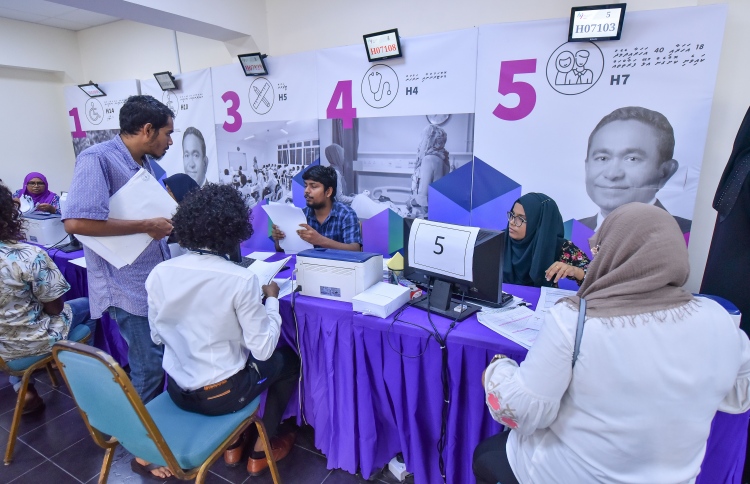 Calling it a violation of rights, documents with the list of scores were submitted to relevant institutions. No one got justice. While Anti-Corruption Commission was probing the matter, the 704 applicants were handed keys to their apartments and they began living there.

To address the complaints and mollify the public, Yameen’s government announced a mega housing project. They targeted the project to the Hulhumale developments second phase area, to provide housing for 80,000 people. Subsequently, 25-storey 16 towers work took off and now moves in high speed. According to the Ministry of Housing and Infrastructure, there will be 7000 housing units and next April, people can occupy in them.

Crammed together, last weekend everyone was rushing to apply to those housing units.

While nobody was able to move in them, 2 months prior to the presidential elections, ‘Dream Housing’ project was announced. Without disclosing any details of how the budget will be obtained to develop them, ‘Villimale Project 2’ to house 300,000 people. The government promised to give 80,000 flats and land plots after reclaiming 230-hectare land from Gulhifalhu, 800 hectare land from Fushidhiggaru lagoon, and even prepared to issue application forms. There weren’t many criteria to meet, and forms were even accepted for the project.

After 5 years of this government, there hasn’t been a single housing project in Malé city or Hulhumalé they completed and people have started residing in them. For that reason, many believe that this government’s housing projects were just a ‘fantasy’. And then there were others who felt President Yameen brought development in high speed and supported him.

Flat for all applicants

Prior to the election doubts were raised from their actions; when they announced that all applicants for Hulhumalé second phase development and Villimalé project 2 will receive flats. 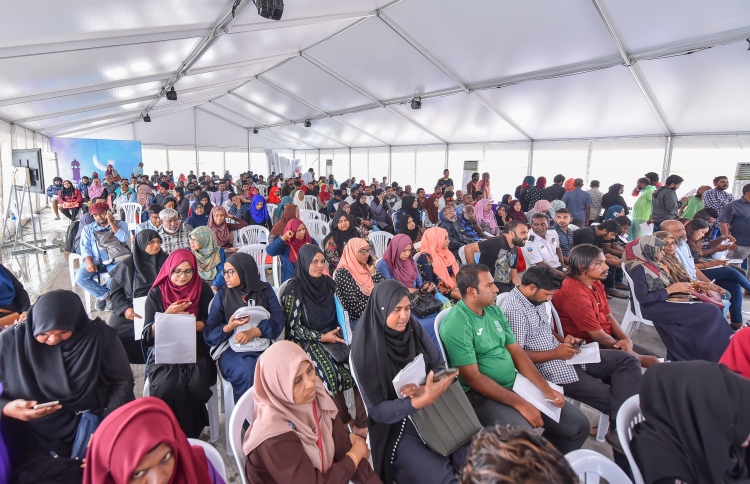 ‘He (President Yameen) had reassured that all those who had already applied for flats and those who apply before the end of the month for Hiyaa project flats will all receive flats,’ said Minister of Housing Dr Mohamed Muizzu, while conveying President Yameen’s message to the public.

‘He has fully assured that he won’t leave out anyone behind and he told me to pass the message to all the citizens of the Maldives.’

What could be the purpose of this? What else could be there aside hitting on the spot where they feel vulnerable, for a vote? The government knows it very well that for those who are suffering from housing problem can’t be solved that easily. Or else in President Yameen’s five-year term, he would have delivered his promise.

Reapplication is a painful process

Since President Yameen lost the election, will the next government fulfil his promise? As he has said, will all the applicants receive flats? Amidst these questions, due to several complaints lodged at Anti-Corruption Commission, Hiyaa project was put on halt yesterday. So now the whole project is questionable. 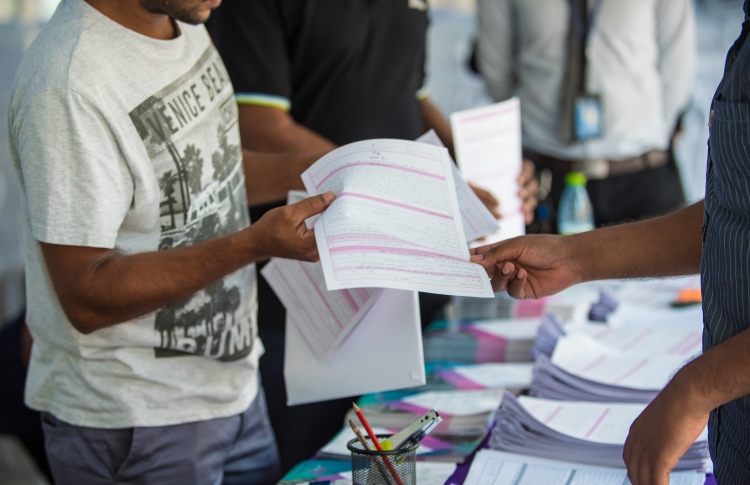 A form being submitted

During the campaign of Opposition Candidate Ibrahim Mohamed Solih (Ibu), who won the election, prioritized housing. He repeatedly said that in his government he will fulfil that promise. And the biggest pledge made was giving flats to those who deserve them and lowering flat prices.

It is yet not clear the method the new government will adapt to identify the most deserved people to issue them the flats. However, he has expressed his sadness over people queuing up for hours to apply for flats and planned to reopen that opportunity. It could be a political decision.

Ibu’s Spokesperson Mariya Ahmed Didi said under the new government’s Social Housing Scheme, application for land and flats will be made open to the public. However, it is unclear whether 20,000 applicants who had already applied must reapply. Or the opportunity will be given again to those who were not able to submit their forms.

Nevertheless, for those who had already applied to apply along with their many documents will certainly be an inconvenience.

‘When the new government starts accepting applications, does the existing applications gets cancelled? If so, it is indeed sad. Even if the country’s president changes, the government administrations does not change right? Therefore, there is no reason to disrespect the feelings of the citizens. Don’t make the citizen a person that can be wooed when you want your high post and can be dismissed when you get to fulfil that wish,’ said Shifana as a message to the President-elect Ibu.

That is undeniably true; advantage has been taken for years, in the name of providing housing. Lies about flats from buildings not even under construction, cheap land plots and flats from lagoons where it hasn’t yet been reclaimed, government assistance to those who can’t afford to pay their utility bills, must stop. Allowing to be manipulated, in time for an election must also stop.

The housing crisis is not something that can be solved within 2 or 3 years.