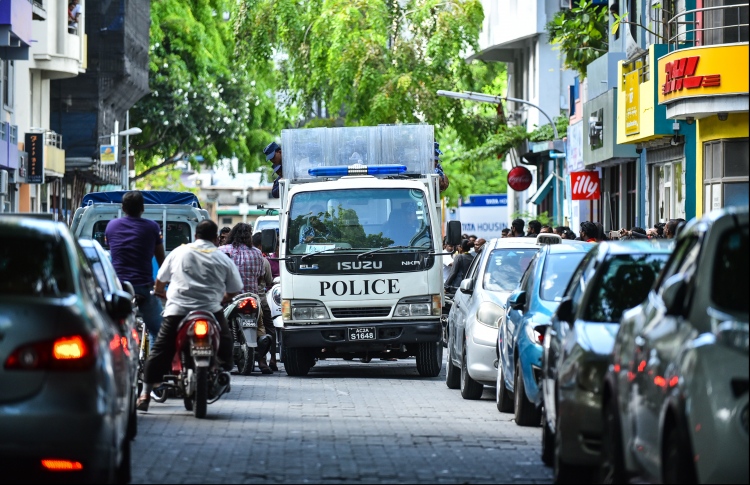 The original Dhivehi article was published on Mihaaru.com website on 13th September 2018

The above are big headlines which made its way to the media in the past two months. At first the scene was of police preparing, removing anything that President Yameen Abdul Gayoom’s displeases from the venues ahead of his visit to inaugurate his developmental projects.

In some islands with a court order,  police removed MDP flags and their banners, and cleared the venues. In some island they also shutdown MDP meeting halls and kept them under their supervision.

Perhaps, it could be because President Yameen had never visited an island to campaign. While it is just 11 days for the election, all his visits are to commemorate ending or launching of government projects. He hadn’t visited the islands to campaign.

Some opposition members accuse the police of taking sides, forgetting their sworn national guard duty and is now lost in promoting a political agenda. Even in the police statements that they had released it is apparent that their tone wasn’t like that of an institution upkeeping the safety of the nation, instead it gave out a more political tone, similar to a political party rally. A recent example was the statement released on the 10th of this month. 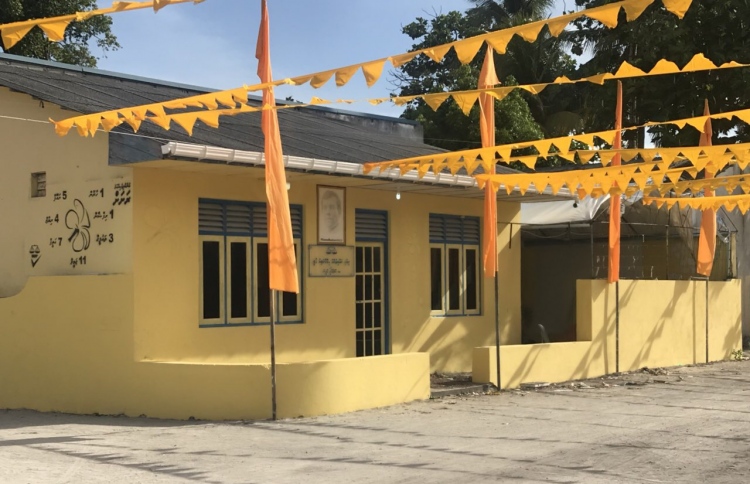 A member of the parliament said from the police statement given on that day reflected that the government was trying to frame main opposition party with several allegations. If not the police wouldn’t have referred to the protests and arson attacks in Malé and other islands with MDP supporters and the Maldives forces after the February 6-7, 2012 protests.

‘The police said that day in the statement that there is intelligence of some planning to hold protests similar to that of 8 February 2012 during the upcoming presidential election. Except for the police, no one else is talking of protests. To date there hasn’t had any unrest,’ in relation to the election, said a reputed lawyer of the Maldives.

‘8 February incident wasn’t something related to an election. It happened due to something else. When the police tie it to the upcoming election are they trying to implicate specific people?’

The lawyer said that when police talks tying the protest of 8 February and the upcoming presidential elections, it shows the extent of political influence on police.

‘Why else would the police say there is 8th February kind of an incident in the works? Or will the public not understand if they don’t mention and connect the date to a possible unrest or arson attacks on election day? They are not trying to bring focus to the right element here. MDP has most certainly not threatened with violence. PPM has also not said they would either,’ said the lawyer.

The other issue the opposition raised was when ruling party PPM is being given access to conduct political activities in whatever way they want, the police not giving the same access to the opposition. One example is police shutting down MDP office and meeting hall in the islands on the day when President Yameen was set to visit. 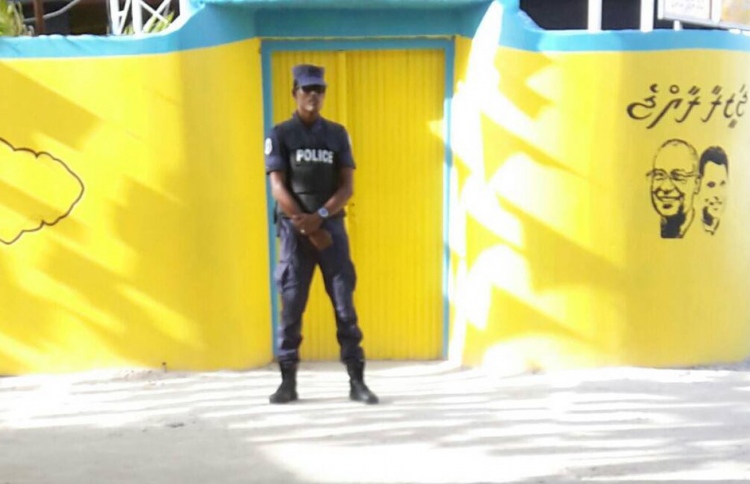 An MP from the opposition said protests had taken place when the government had not given equal opportunity for the opposition. Violence broke out in Gaafu Alifu Atoll’s Kolamaafushi island, between PPM and MDP supporters and banners and flags were destroyed, when they were denied of the same opportunity.

‘Police are not there to do whatever the government instructs them to do. The police must act to restore peace amongst the public in accordance with the law. When PPM can place flags and banners wherever they wish, when MDP does the same but when police go and remove them, is it maintaining law and order?’ asked an MP from the opposition.

Former Deputy Prosecutor General Hussain Shameem said the problem arises when criminal justice system is used to promote political agenda. When there was unrest in Kolamaafushi island that only MDP supporters were arrested and from the way they were arrested it was evident that it was political.

‘If they were arrested following serious crimes, then its understandable. When 18 people were arrested on that day, 1 was arrested while out in the lagoon area. He said he was assigned to fix the flags in the lagoon. Police came and arrested him while he was there,’ said Shameem.

While referring to Kolamaafushi islanders he said when the unrest took place there were no police at the scene. He said the people who got arrested following the incident were people on the list of PPM that they shared with the police, which the island PPM supporters boasted.

Then came the news of police removing an MDP banner hoisted in Baa Atoll Maalhohu island. Due to the text found on the banner. It read, ‘Vagakah 1000 dhuvas, rayyithunah 1 dhuvas’ (1000 days for a thief, 1 day for the people).’ 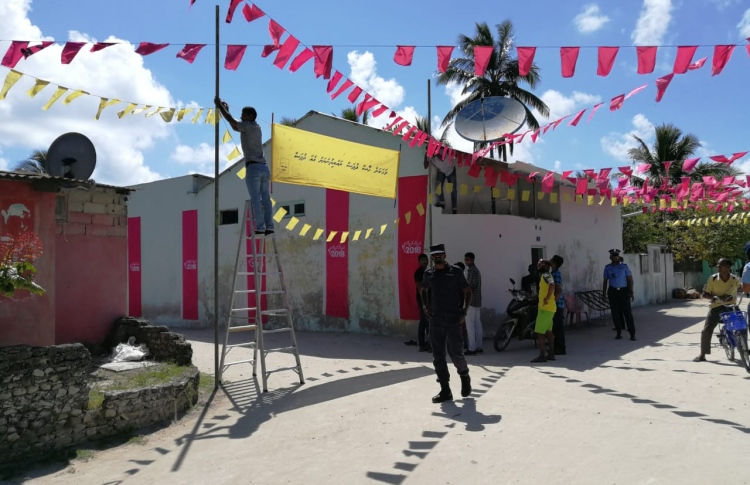 Maalhohu Councillor Aboobakuru Abdullah said 4 days ago, they were told to remove the banner by Eydhafushi Police Station. And the reason was the banner had the word ‘Vagu’ (thief) on it.

If that banner was removed due to presence of an unlawful thing, then there were plenty of such things which needed to have been removed from the street before removing that banner. One was the banner hanged by ruling party PPM to harass Raajje TV.

The banner reads, ‘If trying to slander people then the way out would be by an anti-defamation fund box.’

Certainly, this has nothing to do with President Yameen’s campaign. If elected for a second term, he has not stated what he would do under the defamation act. Raajje TV was the only people to open an ‘Aburufulhu Fund’ (Defamation fine fund) and got contributions from the public. 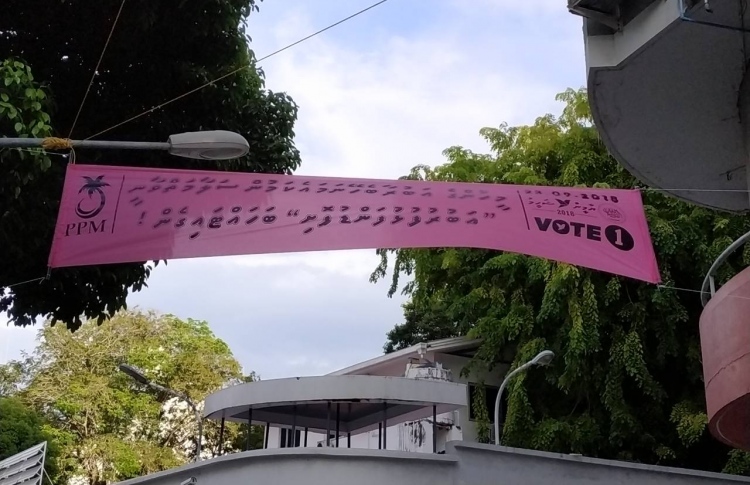 ‘It was definitely put up to taunt us, and to persecute the rest of Maldivian journalists,’ said Hussain Fiyaz Moosa, CEO of RaajjeTV.

‘When they had put up the banner while tying it to our property and items, they had not even asked for our permission to do so. We see it drawn up in accordance to the principle of freedom of expression. Therefore, we won’t ask them to remove it.’

Although, the opposition accuse the police of affiliating with the government in their campaign, ruling party PPM maintained that the police are more professional and responsible to take part in a political party campaign.

‘If police did campaign they would do so to maintain patriotism, restore justice and to ensure that the public adhere to the rules and regulations, that would be the campaign of the police. The police will not campaign for any other.’ said PPM Secretary General and MP for Nilandhoo constituency Abdul Khaleel.

He said the opposition had always been trying to disrepute government institutions, opposition MDP had relentlessly been attempting to do that and is now out to do that to return to power.

When Khaleel was asked why only MDP supporters were arrested following the unrest in Gaa Alifu Kolamaafushi island, he said the police fulfilled their statutory obligation. And he doesn’t believe that it has anything to them supporting a side, and if investigated and found out that the detained belong to one side, then they would have been arrested without checking which party they belong to.

Although, this was the tone of PPM party, the opposition raised doubt whether the police’s action were professional. As they could give similar examples to challenge it.

During the presidential campaign when one had tweeted if President Yameen had come to his home he would ‘knock on his head’ tweeted someone and the police had questioned, investigated and confiscated his phone.

When opposition presidential candidate Ibrahim Mohamed Solih (Ibu) had referred to the incident where a sinking fishing vessel when called for help was not rescued, police is now investigating the candidate.

Nevertheless, on 25th August when a PPM supporter had said he would behead ex-President Mohamed Nasheed during a PPM rally, it still remains as something which hadn’t taken place. When asked about it, police declined to comment about the matter. Perhaps police doesn’t see it as condoning terrorism.