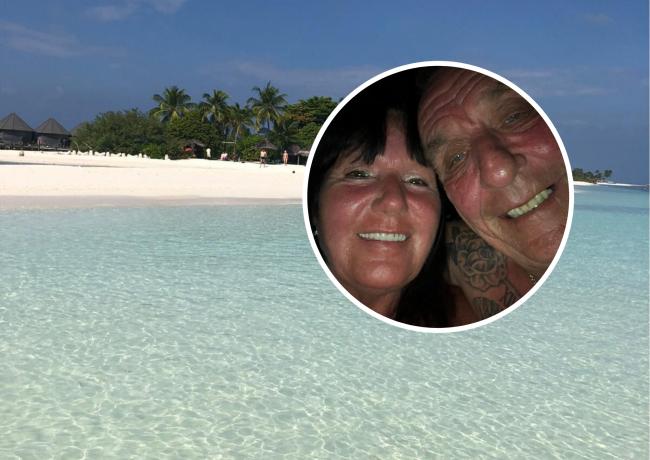 A South Wiltshire couple are among hundreds of tourists stuck in a luxury resort in the Maldives where two members of staff have tested positive for COVID-19.

Jeanette and Phil Stone, from Winterslow, near Salisbury, flew out to the Kuredu Island Resort on the Lhaviyani Atoll last Monday.

What was supposed to be a dream holiday, which cost the pair £6,600, quickly turned into a “nightmare” when due to an outbreak of coronavirus, the entire island was put on lockdown.

“We arrived on Tuesday and everything was fine, on Friday we went on a sunset cruise and that was fine then Saturday morning we got a letter saying there was an emergency meeting in the main reception,” said Mrs Stone, 57.

“They basically said that they put the island on lockdown and there are no seaplanes allowed in or out and nobody is allowed off the island until further notice.”

Despite the worrying news, the pair were told nobody had contracted the virus. However, the next day, another letter revealed that a doctor had tested positive after coming into contact with an Italian tourist who has since left the island.

The second member of staff who caught the disease is believed to be a member of the diving centre who had also come into contact with the Italian national.

Both members of staff are now self-isolating.

While all guests are receiving daily updates from the hotel management, the couple says they have “no clue” how long the lockdown will be in place for, nor when they will be able to fly home.

“We’re due to leave on Thursday but it’s not looking likely.”

She added: “Some friends are saying to make the most of it but it’s not like that. We’ve got work waiting for us when we get back.”

Despite the lockdown, which they reckon is affecting around 600 people, the pair say they are not self-isolating and guests are not being tested.

Mr Stone, 63, said: “We can still go for breakfast and walk around the island but you’re there thinking ‘Am I going to wake up tomorrow with flu-like symptoms?’ You meet someone and think ‘Are they carrying it?’ It’s always in the back of your mind.”

While the potential loss of earnings that could result from a delayed return to work is of concern, their main worry is there and other people’s well-being.

In a Facebook post, a spokesperson from the resort said: “The health and wellbeing of our guests and employees remains our primary priority, therefore to prevent the spread of the COVID19 following the two positive test results, all guests and employees will remain on the island and follow advice and guidance of the Maldives Health Protection Agency and the Ministry of Tourism.

“The temporary restrictive measures will continue until such time that the authorities release the island from its quarantine period. At this time there will be no flight in or out of the island. The island is well stocked with the essentials and we are confident in the care that will be provided to all.”

In a letter to the couple, the British High Commission in Male and Consular team at the High Commission in Colombo said they are “aware” of the situation and are “in direct contact” with the local authorities and the hotel management.