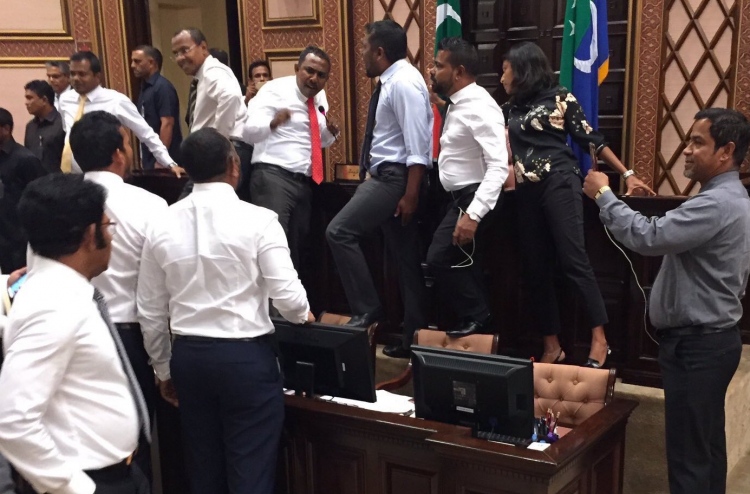 The original Dhivehi article was published on Mihaaru.com website on 28th March 2017.
By Fazeena Ahmed

When the time came to cast the vote of no confidence against Speaker of the Majlis Abdulla Maseeh, an issue emerged with the electronic voting system. Parliament majority PPM members felt the solution was to ask each lawmaker for their vote individually. According to parliamentary procedure, a motion needs to be passed in order to conduct a roll-call vote. However, in order to pass the motion for a roll call vote, the vote was cast using the [allegedly]  faulty system. This is (according to some people) a big joke of the Maldives Parliament.

The result was not what people got shocked and appalled for – some people say it shows that with influence the government can do any deed. It was also a clear picture of how much PPM members are enslaved. Along with it, it also shows that using the parliament, laws are passed by smashing the rules and regulations and to make do as they please, said some.

The government won Maseeh’s censure vote in its favour by using the help of the security force and by physically evicting many opposition lawmakers. Maseeh’s post was defended by 48 votes.

Earlier in different cases, the PPM/MDA coalition used to achieve 54 votes. Therefore, even though Maseeh’s seat was secured the government had lost the super majority of the parliament.

The question is: Who really won Maseeh’s impeachment vote? Was it the government or the opposition? We will leave the answer to those who watched the parliament session.

No trust for members, freedom was stolen

All major votes were cast through the current electronic system. Each lawmaker gets a 30 second voting time, as they want. They even get the chance to change their first vote within the time frame.

So why should the system become defective when it came to casting Maseeh’s censure vote? As the opposition has secured votes of some PPM members ahead of the voting day, was there a fear that additional members of PPM may vote against Maseeh during the live voting and seeing the way the result may tilt?

The opposition believes that the voting system was tampered with as the pro-government members did not have the confidence in winning the censure vote. They also say that the only way was for the government was to ask for votes individually –  in that way, members will feel intimidated and hesitate to vote freely against the government.

MDP parliamentary group Leader Ibrahim Mohamed Solih (Iboo) said, “During the vote what we witnessed was that the government has no trust over their own members.” While they have the majority, if they had the guarantee of winning the vote, why didn’t they cast the vote normally through the electronic voting system?

Dhiggaru district member Faris Maumoon who has been leading the [call for]  Maseeh’s impeachment vote, said it is very clear that hereafter, in any vote, the government will not get a parliament majority.

When lawmakers individually stand and declare their vote, it is a violation of an independent vote. I cannot say this was an impartial vote that was held in accordance with the parliamentary procedures.

Maamigili district member Gasim Ibrahim said taking a vote by threatening members and showing force is “unquestionably an illegal and invalid vote.”  The reason is that, when there are set rules and procedures to follow,  going against [the rules and procedures] makes it invalid.

When PPM parliamentary majority leader Ahmed Nihan proposed for a roll-call vote, 45 out of 83 members voted in favour of such a vote, 2 members voters against it and 1 abstained.

In the vote taken by the electronic system, the chair, then Deputy Speaker Moosa Manik, and the opposition aligned lawmaker MP Ahmed Mahloof, who is currently serving prison time in Maafushi Jail, was recorded as having voted. The person chairing the session can only cast his vote when the vote results in a draw.

“When I posed the question to the Secretary General he replied saying that this is how (Mahloof and Reeko Moosa votes) the vote was recorded. Then I said so isn’t this an invalid vote? Is there any way this vote result can be accepted? Then he said we will omit the 2 votes and recount,” Faris said.

Lawmakers not in their seats were also recorded as having voted, he said.

“The reason why we even submitted the impeachment motion in the first place, was that rules and laws were continuously being broken. Even though the citizens didn’t realise this before, with this vote, when it was revealed to the public that this is the way matters have been conducted in the parliament, it is a huge victory,” he also added.

“What the Speaker and Deputy Speaker together have been up to is very clear,” Faris said.

PPM parliamentary group’s Leader Ahmed Nihan denied claims that Maseeh’s vote was not free and that they went for a roll-call vote as they were not confident in winning.

He said that it is the acceptable procedure to follow when it comes to an essential vote like an impeachment vote. He raised the question why the opposition did not participate in the roll-call vote if they were confident in winning.

“When it came to impeachment vote of Speaker Maseeh, similar to the way we said ‘no’, the opposition could have said ‘yes’ to it, that’s all.” he said.

A roll-call vote was submitted when issues  were raised over problems with the electronic voting system. It was not to threaten and not to intimidate the members. There was no threat to any members, he added.

However, this vote has entered into history along with many questions. This cannot be concluded as a vote that that will not raise legal issues later, if not now.