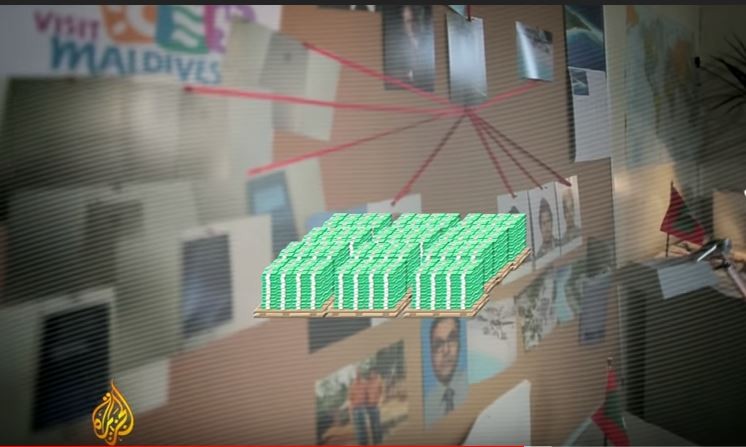 The original Dhivehi article was published on Raajje.mv website on 14th January 2018.
The following is a loose translation:

Between 17 July 2014 and 21 October 2015, USD 66,385,921.34 were stolen from Maldives’ treasury. This is so far the biggest theft ever committed from the Maldives’ public fund. To swindle this amount of money, a state-owned company Maldives Marketing and Public Relations Corporation (MMPRC) was used.

It is difficult to calculate the number of islands, lagoons and lands leased by the President Abdulla Yameen’s government. The purpose of this essay is to understand how the biggest ever heist was committed from Maldives’ treasury. Some might have seen George Clooney’s Oceans movies. I have seen it. MMPRC corruption is not even a likely ploy of that present in a George Clooney’s movie. The degree of nefariousness. The masters of deception. A clandestine robbery, that only a true economist can only execute.

You all may recall the number of revisions done to the financial regulations to pave the way for the robbery and how some works of the ministry of tourism were transferred to MMPRC. State-owned lands, uninhabited islands, islets and dry reefs were opened to a lease galore. Until 21 October 2015, through MMPRC, 40 islands and 3 lagoons were sold. The income derived from it stood at USD 66,385,921.34. The payment was received in US Dollar cheques to MMPRC. However, the money was not deposited into MMPRC’s bank account. It was deposited to a different individual’s accounts at Bank of Maldives; to a Scores of Flair Pvt Ltd (SOF)’s bank account 7701701832002.

The USD 66 million deposited into SOF’s bank account, were then distributed to several people. The SOF distributed the money in different transactions. 207 cash cheques were issued. Fraudulent money was withdrawn 20 times. Whilst 1592 cash transfers were done, money was sent abroad 14 times.

Between July 2014 and October 2015, there were 1833 transactions made through SOF’s bank account.

USD 66,385,921.34 was embezzled from Maldives treasury through the aforementioned 1833 different transactions.

We received SOF’s Bank of Maldives account details when a Bank of Maldives’ staff blew the whistle. After realizing that unlawful activities were happening through the bank, the staff decided to go public with it. Transactions other than cash withdrawals of the fraudulent money taken place from SOF’s bank account is also no less. The recipients of those transactions are also identified. The perpetrators of the heist and those who benefitted from this are also known. They are the names evident as account holders of the Bank of Maldives.