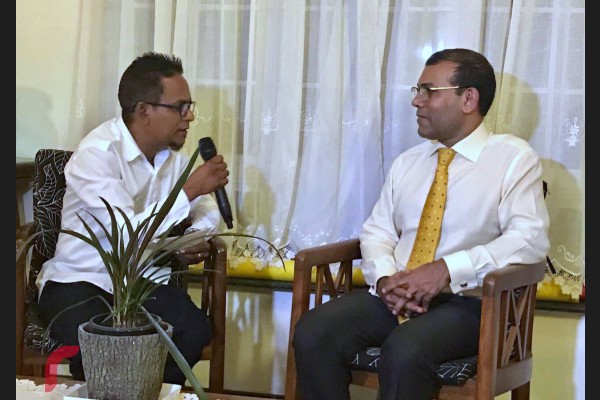 The original Dhivehi article was published on Raajje.mv website on 14th January 2018.
The following is a loose translation:

– MMPRC’s corruption is the level of deceit and an exemplar of dishonesty and deviousness.
– This kind of heist is not even likely in a George Clooney’s movie
– The total amount of skulduggery that happened through President Yameen’s residence, is yet unknown

Former President Mohamed Nasheed has said that the theft of more than USD 66 million, through MMPRC is not even a likely plotline in a George Clooney’s movie.

In an op-ed by President Nasheed to RaajjeMV he said, MMPRC corruption is the epitome of deception and the embodiment of slick and slyness. And that is in fact, that only the finest of an economist can execute in such a clandestine manner.

‘Until 21 October 2015, through MMPRC, 40 islands and 3 lagoons were leased. The income earned was USD 66,385,921.34. The payment was received in US dollar cheques addressed to MMPRC. However, the money was not deposited into MMPRC’s bank account. It was deposited into an account holder of Bank of Maldives; into a private dollar account under the name Scores of Flair (SOF), said President Nasheed.

President Nasheed said between July 2014 and October 2015, via SOF’s Bank of Maldives’ account, 1833 transactions done. The embezzlement of USD 66 million from the Maldives treasury was done through these transactions.

And that fraudulent money in the SOF account was withdrawn and from the money distributed to several parties, most of the money was delivered to President Yameen’s residence, which is confirmed from Al Jazeera’s Stealing Paradise documentary. However, the total amount of money, taken to President Yameen’s residence, in figures, is still not clear.

He also said that non-fraudulent transactions done through SOF is also no less and the recipients of those transactions can be identified.