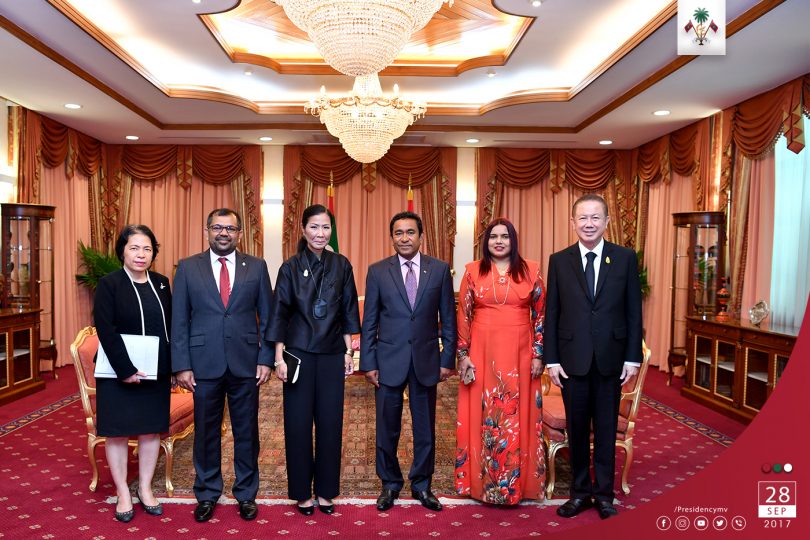 The Minister of Tourism and Sports of Thailand, H.E. Kobkarn Suriyasat Wattanavrangkul, paid a courtesy call on President Abdulla Yameen Abdul Gayoom, this morning, at the President’s Office.

During the call, the President welcomed the Minister to the Maldives and conveyed greetings and good wishes to His Majesty King Bhumibol Adulyadej and the Prime Minister of Thailand, H.E. General Prayut Chan-o-cha (Ret.). The President highlighted on the excellent bilateral cooperation that exists between the Maldives and Thailand and noted that there is high potential for further cooperation between the two countries. He expressed his readiness to explore possibilities of increasing tourism and sports cooperation between the Maldives and Thailand, in the coming years. The President stated that Thailand remains a very favoured country for Maldivian businesspersons, and is increasingly important for outbound Maldivian tourists. He also stated that there has been an increase in the number of Maldivians travelling to Thailand for medical purposes and further stated that Thailand is currently the biggest exporter for the Maldives. The President expressed his desire to see more Thai investments in the Maldives, particularly in the tourism sector.

The Minister noted that it is an honour to visit the Maldives, and expressed hope that her engagements during the visit would further enhance the relationship between Thailand and the Maldives. She also concurred with the President on strengthening cooperation in the fields of tourism as well as youth and sports.