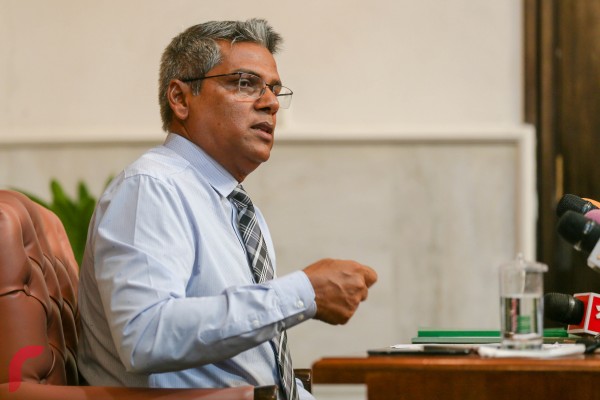 The original Dhivehi article was published on Raajje.mv website on 12th March 2018.

Deputy Speaker of Maldives Parliament Reeko Moosa Manik has said that high profile lawyers have become a nuisance and the allegations against judges need to be addressed even if it means holding them in solitary confinement.

While speaking during the parliamentary debate on the revisions submitted to the Judge’s Law, Moosa said that lawyers cannot dictate what amendments to bring to the laws.

Since attorneys had been advocating that laws cannot be made to override the constitution, Moosa retorted back to those attorneys by saying that if the parliament members vote, those laws can and will be made.

‘Today there are high profile lawyers, and their nuisance has increased. When the constitution was made, there was none. However, now they have their own interpretations of the law and is saying this and that. I feel that they have made chambers and from their chambers, they take the cases to the judges,’ said Moosa.

While criticising judges, Moosa has claimed that judges take bribes. While indicating to that, Moosa said that affluent people’s cases end in their favour, however, the poor man’s case does not.

When it came to the point where the judges revoked the sentence that they issued on their own, judges need to be ‘contained’ even if it means revising the laws, or putting them in solitary confinement, said Moosa.

‘The less fortunate person’s case does not end in their favour, but, the rich person’s case, does. This is the talk all over the Maldives,’ said Moosa, who is also the Hulhu-Henveiru constituency MP.

While referring to the court order issued by the Supreme Court on 1st February, Moosa said that judges are working towards removing the president, and it was Chief Justice Abdulla Saeed who is leading it. If a poor man gets punishment, the judges must also get punishment, and if they can’t accept that, they should resign and do masonry or carpentry work’ and earn.