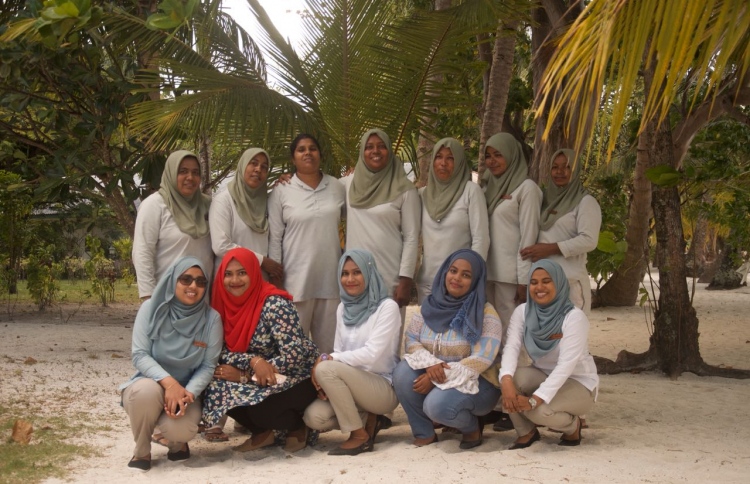 The original Dhivehi article was published on Mihaaru.com website on 8th March 2018.

‘When I first started doing this work, I was a bit scared. I didn’t know what it was even.’ said Mariyam Sheeza, 50, who had started working at Equator Village 27 years ago.

While listening to these talks about when everyone first started working in tourism, Mariyam Rasheeda, 52, said ‘I just ignored my fear and dived right in. When I began working, I didn’t even dare take tips from guests.’

Mariyam Rasheeda started working in this field 17 years ago.

In Seenu Atoll Equator Village, the entire housekeeping team is all female. Although it is men who work in the Maldives resorts’ housekeeping jobs, in Equator Village, even from the beginning, it has been women who had been doing the job. Sheeza who had been in the team for the longest time shared after they established the hotel, the management of that time looked around the island in search of female staff and after recruiting them, they conducted a 3 month course for them. The training was conducted so that they could work in any department of the hotel and after the course was over, the staff were allocated to restaurant, housekeeping and front office departments.

Along with Sheeza there are 7 female staffs working in the housekeeping department. Women of different ages. Every woman’s experience is different. All the women said that 30 years ago working in such a field is something that the society never accepted. While walking on the street people will harass them saying that ‘they are nightclub’ workers. However, she continued her work despite what people commented. Mariyam Rasheeda and Sheeza said that sometimes they are left embarrassed by people’s remarks. However, they are happy that they earn from themselves through their own jobs.

Samiya said she is happy to work while also looking after her children.

The female housekeeping staffs said that it is also a hard job. And they were trained to make the bed for a specific way, clean the room and to wait tables. And they did get involved in the work to make the swimming pool which is available and to renovate the buildings that were built during the British occupation. Although, the work is hard, instead of ‘sulking at home’, they are content that they are doing a job that provides them with an income independently. 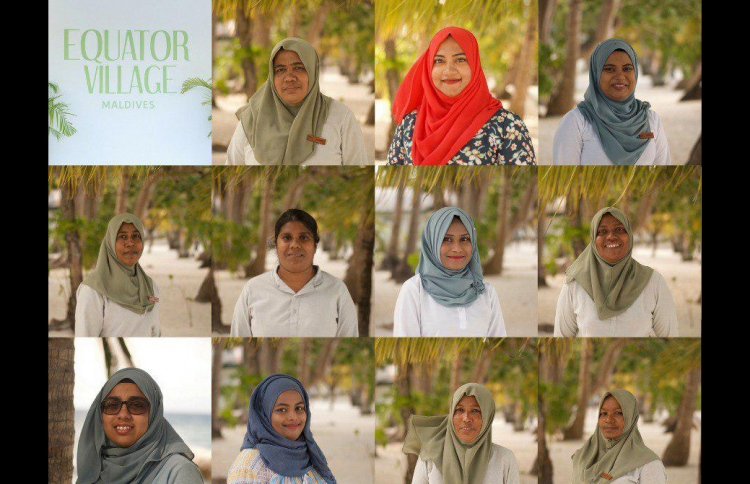 Another housekeeping staff Fathun, 35, said that ‘we want to earn an income independently’.

‘Without a worry’ we can now live.

What all the women want is the satisfaction of the guests who stay at their hotel. Therefore, Fathun said that they work there with ‘a lot of love’.

Shakeeba Adam, 52, who went out to work in 2014, as there was no other to earn an income when her husband passed away. While working at the Equator Village and spending on her four children, she is someone who wants to work in the tourism industry.

‘I want to stay in this job as long as I can,’ said Shakeeba.

Now she has become efficient in her tasks. And she said she’s not hesitant in working in a five-star resort. 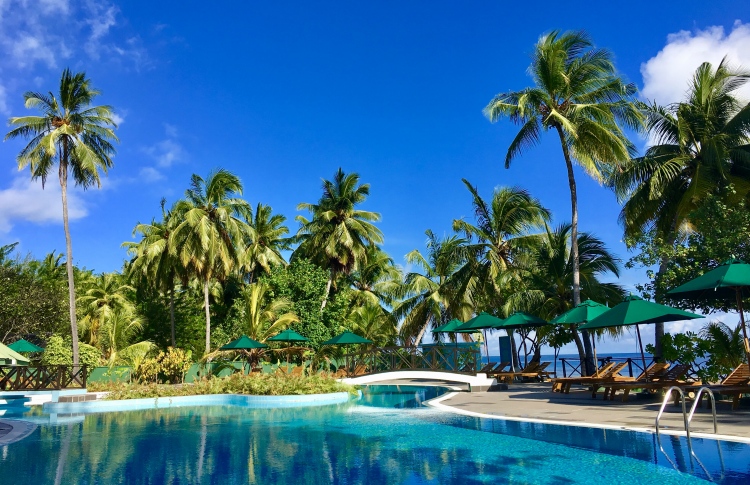 Equator Village’s 15% of the employees are female. The female staff works in the accounting, restaurant and front office department. All front office female staff had studied travel and tourism in school. Therefore, their interest in the field is high.

Equator Village’s Senior Accountant Fathimath Idhurees said that compared to 30 years ago, people’s attitude towards working in the tourism industry has changed.

Aishath Hussain, 24, who works along with Fathun said that she wants to ‘build a career in Addu’. She gets the support from her husband and her family to work in this field. After getting firefighting training, while working at the Equator Village, she is now part of the hotel’s special squad member.

Aminath Irfa, 24, after finishing school from Malé, had moved to Addu with her family and now works in Equator Village’s front office. Aishath Waleeda and Irfa are two young women, who spend most of their time giving city tours and excursions to the guests. Ever since they started studying tourism in the school, they were eager to work in the industry, said Waleeda and Irfa.

Equator Village hotel which is run by one of the Maldives’ first tourism company, Kaimoo Travel and Hotel Services is a historical place. When Ocean Reef Club was opened, Maldives first ever female business entrepreneur, Saleema Mohamed, who worked in the tourism industry said, ‘We first sought female employees, to give financial independence for Maldivian women.’

‘As for tourism industry, we need women as well.’

According to Saleema, there are difficulties when finding female staff.

‘Sometimes we have to meet with their families and give assurance that we won’t disappoint them,’ said Saleema.

She said, ‘Any woman want s to progress in this field should target reaching the top post in the field, and can do so if they work accordingly.’

My hope is more women entrepreneurs starts this business and start guest house or similar businesses,’ she said.

There women in different posts working in Kaimoo. Similarly, Kaimoo company’s Chairwoman Moomina Haleem is the first elected parliament member. And the first female cabinet minister as well. Moreover, there are also females working in Kaimoo as directors, managers and their resorts’ managers.