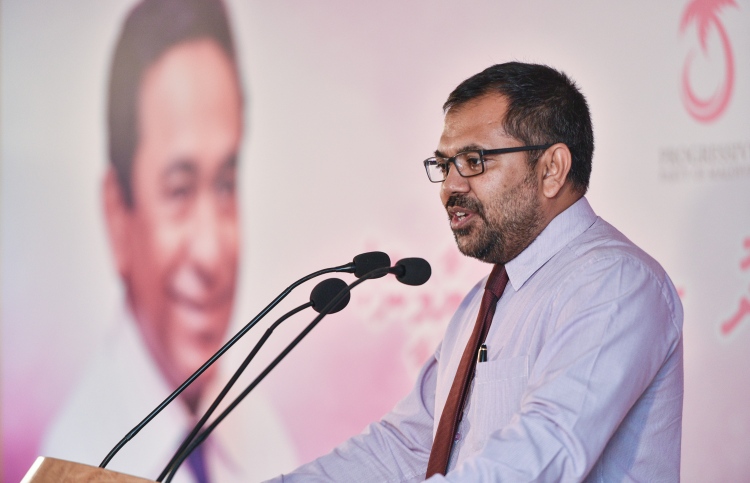 Minister of Tourism Moosa Zameer on Monday night said that incumbent President Abdulla Yameen would be the “only choice” for Maldivians in the presidential elections slated for 2018.

Speaking at a rally held at Kolamaafushi in the southern Gaafu Alif atoll, Minister Zameer said that re-electing President Yameen would be crucial to continue the many development projects the current government has instigated.

The rally was held so that the president could personally meet the locals of Kolamaafushi.

According to Zameer, President Yameen has achieved great feats in developing the tourism industry in the southernmost parts of the Maldives. He noted that a new resort in Gaafu Alif atoll will be unveiled very soon.

“In order to sustain the development, it is important to let go of the petty issues that certain people stir up, and work with President Yameen.”

Speaking about the more immediate parliamentary by-election for the neighbouring Villingili constituency, Zameer assured that the ruling Progressive Party of Maldives (PPM) will win the seat, promising the constituents that the government will return to the atoll with a “master plan” for further development.

He had not specified what was compiled in the “master plan.”

“We never quite seem content with what we have. If we have a harbour, we’d want a bigger harbour. The airport is not big enough. We’re dissatisfied with the factory’s output. So we need a president who will keep on par with what the citizens want,” Zameer said.

Lauding the president further, Zameer claimed that billion-dollar development projects do not just get handed to “politicians with the loudest voice,” but rather from the hard work that the president himself is actively involved in.