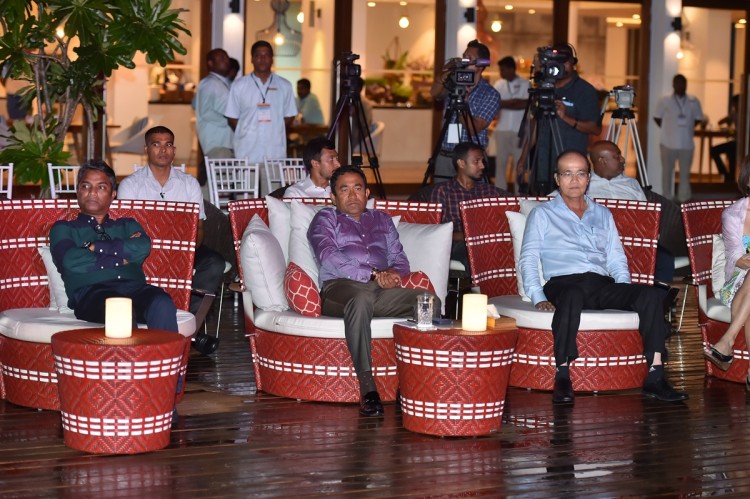 President Abdulla Yameen at the inaugural ceremony of the “Mercure Hotels Maldives Kooddoo” — Photo by: president_office

President Abdulla Yameen has admitted to feeling pressure due to the opposition’s work, saying that it has made it “difficult for money to be transferred into the country“.

The President made the comment at the inaugural ceremony of the “Extended Kooddoo Airport Maldives” on Monday night, where he criticized the opposition’s work to inform the international community on the situation in Maldives.

He noted that “a previous administration” had spoken about how Maldives was going to sink because of sea level rise, adding that this had led to reports that Maldives was seeking to buy land elsewhere. President Yameen also noted that “what they are doing now is, describing Maldives as a place that supports radicalism and extremism“.

The President added that such comments only hurts “the possible foreign investors and the Maldivian people“.

He said the Maldivians have lost a number of luxuries because of this, highlighting that the number of Maldivians being detained at airports “have increased“.

“If money is being transferred into Maldives, there are issues; why is it so? It’s because the money might go into the hands of those extremists,” said the President, adding that transferring money into the country is “impossible“.

He also noted that talks about Maldives being a hub for extremists hurts the country’s economy.

According to Defence Minister Adam Shareef Umar, airport security measures were increased “in light of the terrorist attacks targeting airports across the world,” emphasizing that it was “a precautionary step“.

The decision to strengthen the security measures at the airport comes after it was reported that three Maldivians were arrested from Turkey, while attempting to travel to travel to Syria to join the civil war there.

Earlier in the month it was reported that two Maldivians were arrested in a drug cell in Malaysia. However, according to Malaysian authorities, the two were using Malaysia and Singapore as a transit point, before heading to Syria.

While all five have been extradited to Maldives following their arrests, reports indicated that the two arrested from Malaysia “have been freed“.