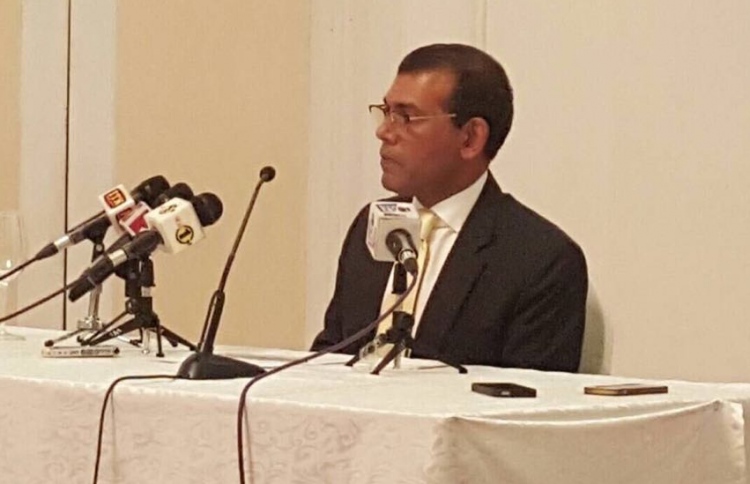 The following is a transcript of RaajjeTV’s special coverage on 22 January 2018:

Let me start by underscoring how important the upcoming Maldives presidential election in the Maldives are.

As part of our constitution, the election must be held by August 2018. And it is not an exaggeration to say that if we don’t have a genuine, free, fair and inclusive election this year, we will probably not have, fair elections for 30 years.

Firstly, there is land grab going on, that threatens not just the Maldives, but the peace and stability of the entire region.

This land grab is very much also, secondly, the Maldives is threatened by a religious extremist takeover. It is again not an exaggeration to say that there is now a parallel state in the Maldives. A state within the state. A network of religious radicals that have infiltrated strategic institutions, the government and street gangs.

They lie and wait, ready to overrun the country and impose a radical version of the religion upon the Maldivian people and tourists alike.

President Yameen works with the deep state, but he cannot control it. So the election this year, are not just about choosing a president of the Maldives, they are about peace, stability, democracy and tolerance.

In any genuine democracy, It is the members of the political parties, who choose who will contest in the election. But in the Maldives, it is President Yameen who seeks to choose, whose name will be on the ballot box.

He has disqualified every opposition leader, from standing for election and has purged  his own party as well. Every one of President Yameen’s rival is now either in jail or in exile.

President Yameen wants a coronation, not an election. But we won’t let that happen and if he thinks he is going to steal this election from the Maldivian people, and have an easy right, he is very mistaken.

Today, my lawyers filed a response to the UN Human Rights Committee regarding President Yameen’s decision to prevent me from contesting in the presidential election.

We feel that the UN Human Rights Committee is due to deliberate my case at the next session and will come out with a ruling that is we hope that will be legally binding in the international law. You would remember in October 2016, I submitted a complaint to the human rights committee under the optional protocol to the international covenant on civil and political rights, the ICCR.

I argue that the government of the Maldives has violated article 25 and article 28, which is the right to political participation and article 22 which is right of freedom of association. And I believe and hope that ICCR would come out with their judgment hopefully in March, and therefore, the UN would have spoken.

I sincerely hope that the UN will rule that government of the Maldives, must allow me to contest in the presidential election. And If I can contest, I will contest. But If President Yameen refuses to abide by a UN ruling, clearly the election will be a farce, unfree, unfair and non-inclusive and illegitimate.

I hope that my civil and political rights will be restored to me and I can seek the presidency in this election.

But let me be very very clear. If I am prevented from contesting If President Yameen intends to hold an illegal election. Then we won’t make it easy for him. We won’t boycott the election. Come what may. We will take part in that.

The joint opposition of which my party, the Maldivian Democratic Party, is a member, will put forward a common candidate to challenge President Yameen.