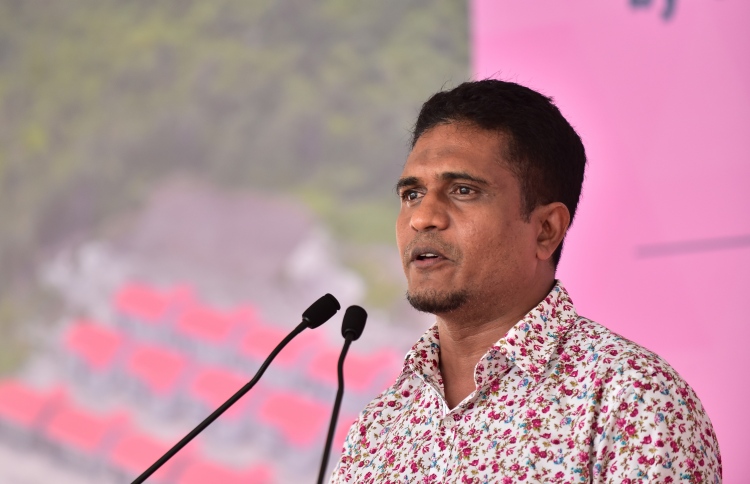 PPM’s PG leader Ahmed Nihan speaks at the ceremony in which CMEC handed over 1,500 flats to the Maldivian government. PHOTO: HUSSAIN WAHEED/MIHAARU

Speaking at a ceremony held to hand over 1,500 housing units developed by China Machinery Engineering Cooperation (CMEC) to the government, Villimale MP Nihan accused the opposition of damaging the cordial relations the Maldives has with its neighboring countries. He specifically noted that the citizens should be vigilant and support president Abdulla Yameen, accusing the opposition of trying to hinder the special relations the Maldives holds with China.

Referring to “Dhivehi Meysthiri”, a carpentry that was owned by Nasheed’s family, Nihan stated that Nasheed was responsible for the disintegration of one of the most successful carpentries in the Maldives and, thus, does not qualify as a person who can criticise the upcoming free trade agreement that the Maldives is about to sign with China.

He stated that even though Nasheed had proclaimed to be the mastermind behind social housing schemes, he is now being a menace to the country. Nihan also said that the social housing program is of utmost importance to president Yameen and that the government is working tirelessly to provide the citizens with affordable housing.

Referring to the landmark bridge currently being developed between capital Male and airport island Hulhule, which is largely financed by China, Nihan said that even though the former president had claimed that the bridge would not become a reality, we would soon bear witness to citizens driving and crossing over it.