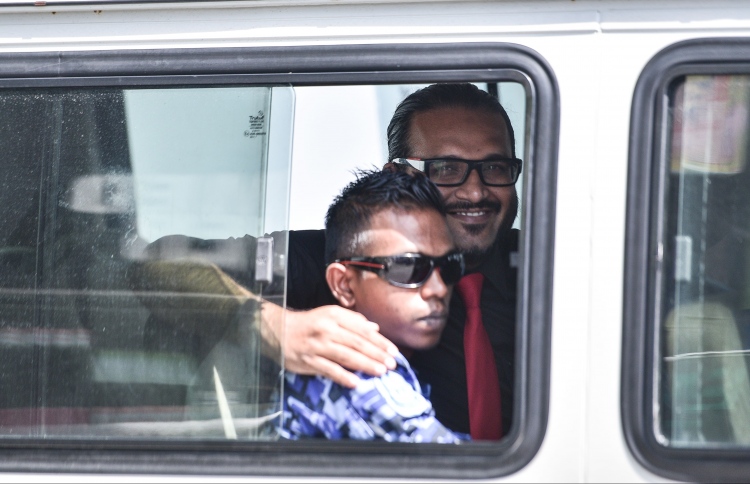 Ex-VP Ahmed Adheeb pictured inside a police vehicle as he is escorted back to Dhoonidhoo detention centre after his preliminary hearing at the Criminal Court. PHOTO: HUSSAIN WAHEED/MIHAARU

Claiming lack of sufficient information for the investigation, Maldives Police Service have filed away the case submitted by jailed former vice president Ahmed Adheeb’s two lawyers about an alleged plot to assassinate Adheeb.

Lawyers Mahfooz Saeed and Moosa Siraj had claimed last July that they had received information of a plot to murder Adheeb in his cell at Dhoonidhoo Detention Centre. They had requested the police to investigate the case and prevent such an occurrence.

While Police had initially claimed that the assassination plot rumour was false and that Adheeb was fully protected in his cell, they had summoned the lawyers for questioning. However, Saeed and Siraj had refused to disclose the identity of their source, resulting in a criminal investigation against them. Police had confiscated their phones and the lawyers were charged under the Penal Code of obstructing justice, spreading misinformation and inciting fear.

Police on Tuesday sent a notice to the lawyers, informing them that no suspects have been found behind the alleged assassination plot due to lack of cooperation from Saeed and Siraj. Police stated that they had discussed the case with the Prosecutor General’s Office and that criminal charges cannot be levied with the current amount of information they have. Thus the case has been filed and it would be resumed only if more information surfaced, Police said.

Siraj countered that he and Saeed had cooperated with the police but admitted that they had refused to reveal their source’s identity.

The authorities are yet to make a decision regarding the investigation against the two lawyers.

Former vice president Adheeb is sentenced to 33 years in jail over various convictions, including his involvement in the largest corruption scandal in the history of the Maldives and for orchestrating an assassination plot against President Abdulla Yameen.