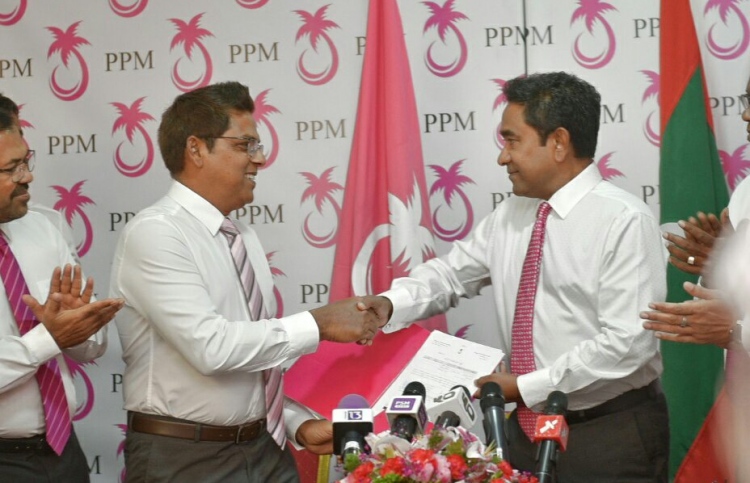 The opposition coalition would fail in bringing a single candidate to defeat President Abdulla Yameen in this year’s Presidential Elections as they have too many internal conflicts, declared the former chairperson of main opposition Maldivian Democratic Party (MDP), Moosa Manik, late Tuesday.

While appearing on a programme of state television TVM, Moosa, who is the current deputy speaker of the parliament, said that the opposition coalition was set for failure and it was starting to show even now. He declared that the government and Yameen had nothing to fear from them, and they were sure to win.

Moosa said that the current situation indicated that two candidates would be put forward by the coalition, from both Jumhoory Party and Adhaalath Party, while MDP would have their own candidate, former president and the party’s leader, Mohamed Nasheed. However, he pointed out that Nasheed was no longer an eligible candidate as he was currently sentenced to 13 years in prison on terrorism charges.

Moosa went on to claim that Nasheed no longer had support within his party itself and it could be seen from the online poll that was recently taken by Raajje TV, an opposition-aligned local news station. A feud was ignited between supporters of MDP and JP over the results of the poll since Nasheed lost to JP’s leader Qasim Ibrahim.

“Earlier this evening, we saw that the former Parliament Speaker, Abdulla Shahid, was being politically enslaved by MDP,” proclaimed Moosa, going on to say that Nasheed would eventually become the “biggest trap” for MDP.

Moosa added that MDP should consider other candidates if they wanted to succeed.

“It is sad that a single group of people, who are controlling the party, refuses to give opportunities to other candidates.”

Furthermore, Moosa stated that former presidents, Maumoon Abdul Gayoom and Nasheed were pretty much on the same level, although Nasheed appeared to be a step ahead of Maumoon in lying and deceiving people.

Moosa also touched on the joint committee which was established with two members from each party to discuss potential candidates. However, MDP was later seen hosting a separate news conference to announce Nasheed as their candidate. Moosa declared that the development felt like it would create more friction within the coalition, pointing out that things should have been discussed among all the members of the opposition alliance.

Moosa asserted with confidence that Yameen would win this year’s elections easily, stating that the development he brought to the Maldives had won him the people’s support.

“The people want someone who would do the things that they need. If they are satisfied, then it would clearly show in the election,” said Moosa.