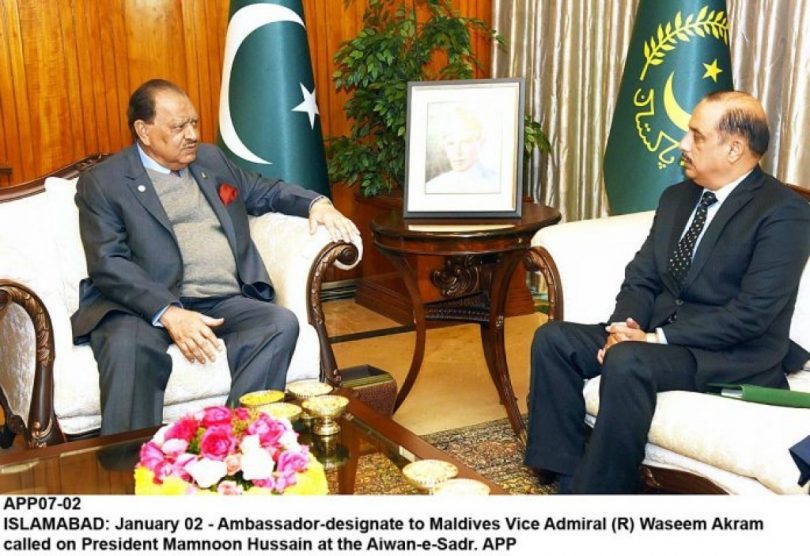 Pakistan President Mamnoon Hussain on Tuesday reiterated the importance of its relations with the Maldives.

According to Pakistan media sources, during a meeting with the Ambassador-designate for the Maldives retired Admiral Waseem Akram, Mamnoon had asked to pay special attention on restoring air and sea routes in order to promote trade between the two states.

Pakistan Prime Minister Nawaz Sharif had made an official visit to the Maldives last year.

In the joint statement delivered alongside his Maldivian counterpart, President Abdulla Yameen Abdul Gayoom also announced the decision to provide additional slots for Maldivian students in the areas of medicine, engineering, pharmacy, and dentistry studying in Pakistan.

The Pakistani Prime Minister highlighted the successful talks with President Yameen to further expand and strengthen the existing bilateral relations across all areas of mutual interest between the Maldives and Pakistan, especially in the areas of trade, education, tourism, and cultural relations between the peoples of both the countries.

Speaking at the joint press briefing, President Yameen underlined that the Maldives and Pakistan have agreed to form the Maldives-Pakistan Joint Business Council and Joint Working Group on Trade as mechanisms that will promote business, trade and investment cooperation, enhance collaboration between private sector operators, as well as strengthen institutional relations.

He further highlighted the important agreements that were signed between the governments of both countries, and conveyed his confidence for the successful implementation of these agreements.

The President underscored the discussions held with the Pakistani Prime Minister, on issues relating to terrorism, violent extremism and radicalization, stating that both the leaders unequivocally agreed to redouble joint efforts to combat the menace of terrorism in all its forms and manifestations.