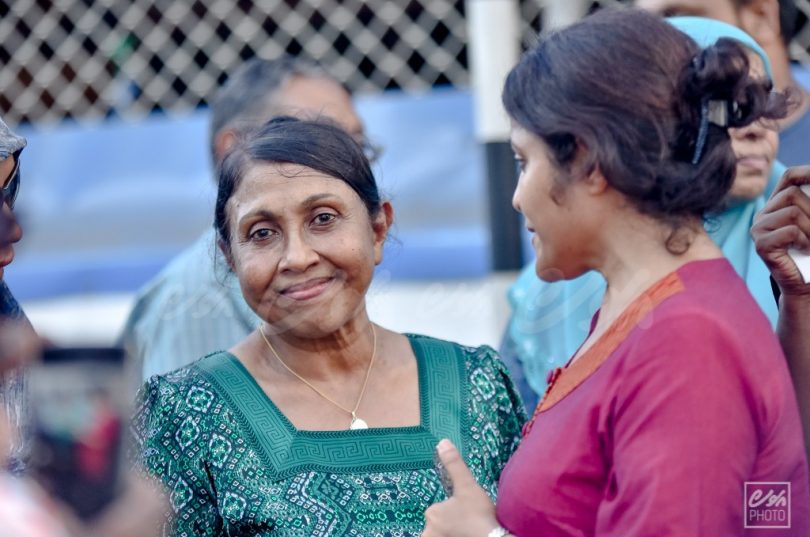 The original Dhivehi article was published on Avas.mv website on 23rd March 2017.

Last Tuesday evening was a day a rare scene was witnessed. The statement given, after taking the microphone of the gathered media abruptly, calmed the hearts and built hopes in many. This didn’t come from a political member who was out in the public. Everyone was overcome with delight when former President Maumoon Abdul Gayoom’s wife and Society for Health Education (SHE)’s Founder, Nasreena Ibrahim, for the first time said something related to politics.

Her message was very short, but, very powerful. The first thing she said was ‘victory will be for justice’. Followed by words that is suited as advice. In that manner, she said that everyone must ensure the path that they take is righteous.

‘For justice there will be victory. Not to take it to some level. The path of the journey one takes is crucial. If that person takes the journey in honesty, then that person will remain happy,’ said Nasreena, who is always smiling. ‘God willing, we will become victorious and very soon we will succeed.’

The social media reacted to the former First Lady’s talk with delight. Most youngsters were happy to hear Nasreena’s voice. Others were happy because of the hope she brought. For her show of determination. Even MDP activists were not able to stay without praising her.

Madam Nasreena, Such a beautiful heart, such a brave & a stong women she is! ❤ pic.twitter.com/Me4FGVJnkc

“Victory is nigh… But it’s not just about reaching the destination, the road traveled matters too”
Former First Lady Madam Nasreena Ibrahim

For many it’s the first time to hear her voice. But amidst the shrill and deafening static her voice rang out pure and true.

In my entire life time i never heard former first lady madam Nasreena Ibrahim talking on media, and today when she spoke i learnt a new word, Siraath-ul-musthaqeem #achivementUnlocked

Hats off to this brave lady Madam Nasreena our former first lady. You are an inspiration to all of us. We will win soon IA.? https://t.co/jTOPWXRpcV

After being praised, she again appeared amongst the crowd, the next day. Because President Maumoon, his son Faris Maumoon and daughter Yumna Maumoon’s husband Mohamed Nadeem were being summoned to the court, she went to the market area. Met with the crowd gathered around there and took photos with them. It was Wednesday.

It was a day that she had to face with deep sadness. 3 members of her family were detained without a release date. However, once again she mustered up her courage gave a hopeful speech to the public. On Thursday she gave a special audio message.

In the message she said, ‘Maumoon is saddened about the condition of her family and the country, however, he is relentless.’ And he still remains steadfast as before. 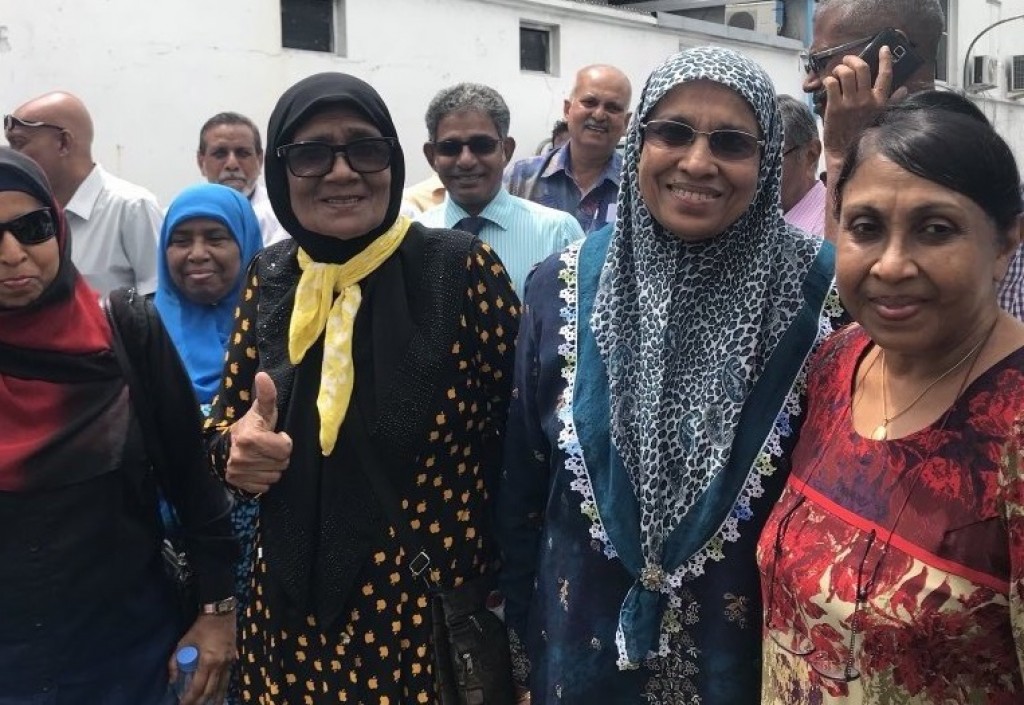 ‘He will keep on carrying out reform works. He didn’t do that work illegally. He spoke with everyone and with good intentions. Therefore, he will go forward in his resolve,’ Nasreena said. ‘Our country is a place we can develop and move forward, very nicely, which can have good people. With that purpose Faris took the initiative, he tried to bring reform through the parliament. There are many who wants to work on this.’

‘Therefore, Maumoon remains very straightforward and very courageous, to move forward. He once said he will do that even on his own (alone). We now see that the whole country wants that. There are so many who wants reform. This is everyone’s country. Everyone wants to pass this country to our grandchildren, unspoilt with its beauty,’ Nasreena said.

While concluding her short message she said,’Maumoon loves this country a lot.’ While Nasreena has come out and is speaking to the public, her youngest son Ghassan Maumoon is still working for the government. It is something that criticisms are directed.