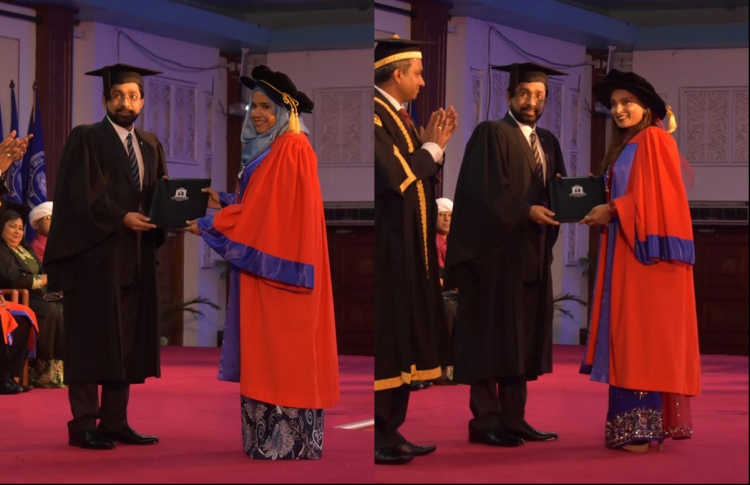 The original Dhivehi article was published on Mihaaru.com website on 27th March 2018.

After completion of the first PhD course introduced in the country, two females have had the honour to earn PhDs on the Maldivian soil for the first time. After completing the course at the Maldives National University (MNU), Suneena Rasheed and Aishath Ali have taken their place in history. They both feel that they had brought a good name to the country. A new hope to the education sector.

Suneena, who always had the dream of reaching the highest level of education, first joined the sector, after completing the first degree in 2006.

Suneena, who had been teaching Chemistry studies in Centre for Higher Secondary Education (CHSE), always wanted to do a Masters Degree while staying in the Maldives. However, since that opportunity was not available at that time in the Maldives, in 2007, she joined Mysore University in India, and one and a half years later, she completed a Master of Education and School Management. 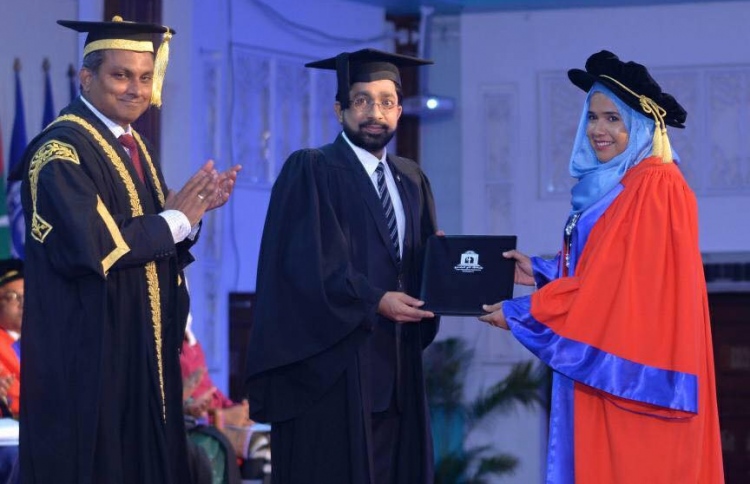 Suneena at the PhD convocation ceremony

‘Afterwards, she joined CHSE again, but this time as a supervisor. Even then, I kept on looking for a way to do a PhD. I always wanted to stay in the Maldives and do a PhD,’ said Suneena recollecting her hopes back then.

The mother of two didn’t want to leave the country. She didn’t want to move her kids from the Maldives’ environment to a different one. Suneena who had been waiting with the hope was filled with happiness when MNU opened PhD programmes in 2013. Along with government research fellowship opportunities for researchers.

Since this was the first time the programmes were conducted in the Maldives, both also faced challenges.

Suneena said, her top challenge was due to the lack of research journals from the University’s database. However, it turned out to be a good thing. When she emailed to professors in different countries to find those journal, it resulted in the establishment of a good network.

‘I emailed to many professors, everyone wanted to help, though they were far away. I was able to build networks with professors in many countries. Such as from New Zealand, Australia and UK,’ Suneena said.

While noting the challenges, Aishath said, lack of library resources was an issue. Aishath said those were solved by friends abroad and with the assistance of Dr Hassan Hameed. 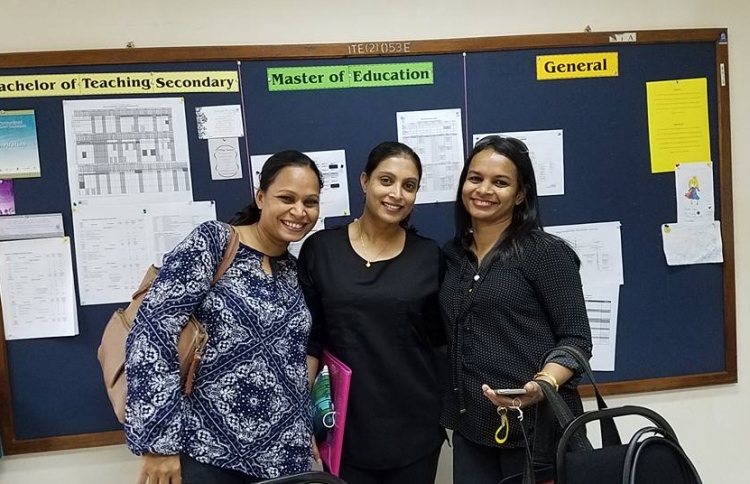 Aishath with her friends

Both found it difficult to find the time to study while facing the challenges. While holding a job and spending time with the family, they studied after making huge sacrifices.

In the past four years, Suneena had been arriving earlier than any other staff at the university. After studying the whole day, she returns from the university in the evening. Yet she spends most of the night, studying.

‘Doing a PhD is tough and a lot of sacrifices has also to be made. The person needs to discipline themselves in certain ways. The tasks assigned by the supervisors need to be done on time,’ Suneena said, pointing out how hard it is.

For Aishath, who had been doing the job of Registrar at the MNU, due to the job’s high demands, she found it hard to find the time to study. She was able to do that after giving up her time with her family.

‘In most days, I even studied after sleeping for just four hours. I can’t be complacent with my job. Therefore, with the help of my husband and family, I was able to study,’ Aishath said.

While many prefer to do a PhD degree abroad, their thoughts are different on that.

Aishath said if the PhD degree is related to the Maldives, then it’s best to do it here. The ease of finding the information and if they find a good supervisor, it is then best to do it in the Maldives, said Aishath who had done most of her studies abroad.

Both agree that they were able to have the opportunity to get a good quality education at MNU, along with the assistance of Maldivian supervisors and visiting professors.

Suneena, who isn’t currently unemployed, said she wants to work in a job related to MNU’s research area.

Aishath who is currently a lecturer at Faculty of Education wants to continue like now and also do research papers.