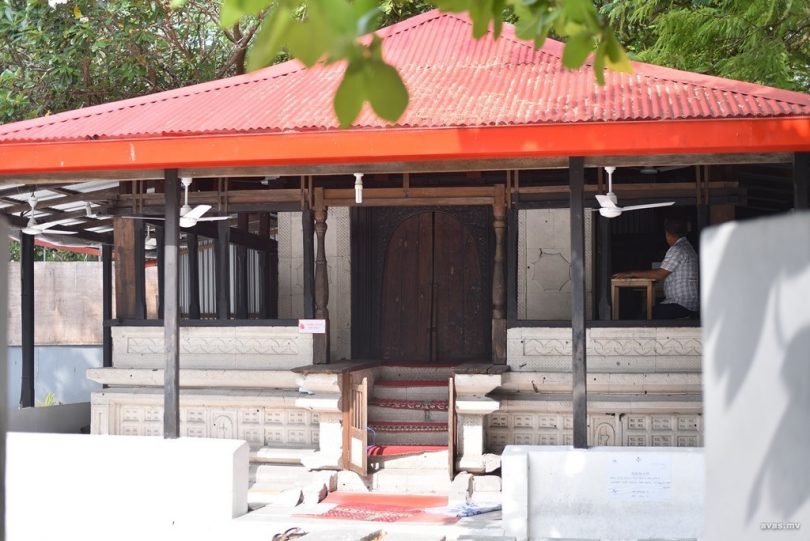 The original Dhivehi article was published on Avas.mv website on 4th April 2017.

Lying at the corner of Lily road, inside Sultan Park, was the ancient mosque Kalhu Vakaru, which had been dismantled in August 2016, announcing that it will be reinstalled on Gaafu Dhaalu Atoll Thinadhoo island’s demolished Friday Mosque premises. However, it has been now more than 1 year, and it hasn’t yet been assembled on Thinadhoo island. Moreover, there isn’t a person on the island who knows about the mosque installation progress.

Lying at South East corner, now named ‘Rasrani Park’, previously known as ‘Sultan Park’, the small mosque had a long history of more than 200 years, has many historical tales linked to the mosque. Although small, it had amazing, beautiful features. It is a rich structure, which signified ancient Maldivians’ hiriga (coral stones) work and other handiwork.

So, where is this priceless ancient structure now? Has the Kalhu Vakaru mosque been placed on Thinadhoo island? In simple terms, can reply a ‘don’t know’, to the question.

There is a reason why Kalhu Vakaru mosque has been mentioned more than any other historical place. After President Abdulla Yameen took office, amongst the major changes brought to the Sultan Park, the small mosque being ‘thrown out to the streets’, without knowing where to take it, is one of the main reasons for that. First, it was planned to take it to Farukolhufushi area, where a heritage island is planned to be developed. However, it was later decided by housing ministry that it will be taken to Thinadhoo island and assembled on the island’s former Friday mosque land plot.

At that time housing ministry said, the mosque will be shipped in pieces to the island carefully and safely in a special packing. The space allocated for the mosque to be placed was also cleared and nicely set. The location which was in the middle of the island was allocated to nicely decorate the surrounding area, after setting the mosque there. However, after that, no further work has been done on the area and remained like that to this day. The ministry didn’t reveal any information regarding the setting up of the mosque. We were still unable to get hold of any information regarding the mosque status by calling the ministry.

‘Regarding the mosque, now we also don’t know. The information that the previous council had was that the mosque was planned to be moved to Thinadhoo island. However, we don’t have any update on it,’ said Thinadhoo Council member Ali Amjad. ‘There is also no document on the subject matter.’ 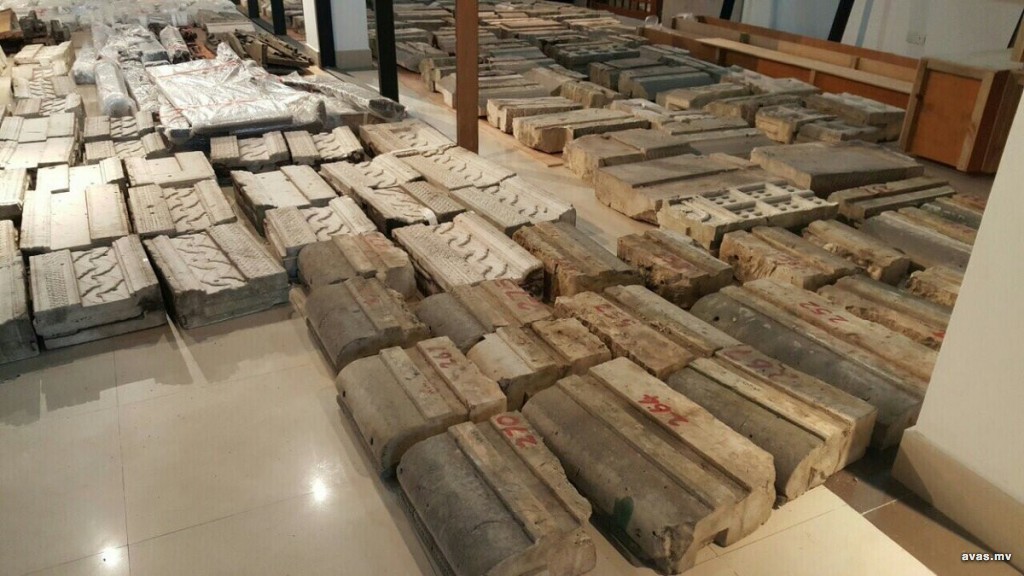 The guardian of historical places of the Maldives, department of heritage, spoke to ‘Avas’ and said Kalhu Vakaru mosque will be moved to Thinadhoo island. That part is assured. However, they also don’t know when exactly it will be moved. And they cannot confirm whether the dismantled coral works of the mosque is in Malé, as it is not in the custody of the heritage department.

An official from the heritage department said the housing ministry will be aware of the mosque’s whereabouts.

While there is no government official who can confirm the whereabouts of the dismantled parts of the mosque, former head of the heritage department Ali Waheed raised his concerns as the mosque was removed from where it stood. And losing historical buildings in this manner will confuse the history of Maldives to the next generation.

‘There are few treasure items which are passed down from our ancestors that can be seen now in the Maldives. We need to be mindful and care for them. In reality, moving those items to different locations is something which would confuse the history and the generations to come will find it difficult to fully grasp it. To preserve Maldives heritage, an action is imperative to be taken by giving it a higher priority,’ said former Director General of Department of Heritage Ali Waheed.

When Kalhu Vakaru Mosque was disassembled in 2016, it had been lying in the South East corner of the Sultan Park for 36 years. The mosque was placed there in 1980, during the tenure of President Maumoon Abdul Gayoom.

Kalhu Vakaru Mosque is the only mosque in the Maldives, which was built in a way that it can be dismantled and easily moved from one place to another. To see Kalhu Vakaru Mosque again fully erected is something that the Maldives history and Maldivians who love the country expects. However, not knowing the whereabouts of the mosque is alarming. And as one year has passed since the mosque had been dismantled without any work done to set it up, is also cause for worry.