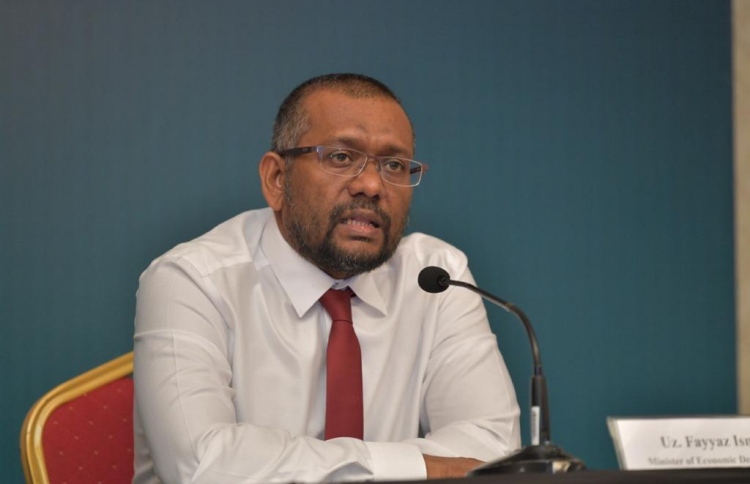 Minister of Economic Affairs Fayyaz Ismail insisted on Wednesday that none of his actions since his appointment for the incumbent administration’s cabinet warrants a no-confidence vote.

Fayyaz made this statement in the wake of ruling Maldivian Democratic Party (MDP)’s efforts to push a censure motion against him through the parliament.

Speaking to local media Mihaaru, Fayyaz asserted that all of his efforts till date were in line with upholding President Ibrahim Mohamed Solih’s government.

“I am spending all my time and doing everything to implement the president’s manifesto. I was under the impression that I have been working very well”, he said.

Fayyaz referred to his party members’ collecting signatures in an attempt to oust him as a “baffling” development since he was “not aware of any issues” that could lead to such a drastic measure.

“… but they are parliament members. If they do not have confidence [in me], they will do what they [should] do. I have no problems with that”.

As per media reports, Speaker of Parliament and MDP’s President Mohamed Nasheed is personally leading the efforts to unseat Fayyaz.

Local media Mihaaru has reported a reliable source, having viewed the document, confirmed that the former president’s signature was first on the list.

Citing the source, Mihaaru further reported that the initiative was being led with the notion that Fayyaz had failed in performing well enough to fulfil the pledges of the incumbent administration.

According to Mihaaru, Nasheed took it upon himself to gather signatures following MDP members’ lack of cooperation with the leader of the party’s parliamentary group who was initially tasked with a signature collection.

Noting that Nasheed had approached members on Wednesday, an MP told Mihaaru that he had “persuaded members to sign” when they declined.

“One member questioned what they could do when Nasheed directly approached asking for their signature”.

Some MDP members have voiced against ousting Fayyaz, reasoning that he was one of MDP’s ministers and making a move against him may disturb the peace within the party and result in conflict.

“He is one of the most hardworking ministers of this government”, an MDP member said, noting that Fayyaz continues to serve the party as well.

Another party member speculated that the move against Fayyaz may have stemmed from a difference of opinion between Nasheed and President Solih.

Some MDP members claimed that Nasheed disagreed with the president’s decision to appoint Dr Abdulla Mausoom of Jumhooree Party (JP) for the recently vacated Minister of Tourism’s seat.

“Nasheed apparently does not want to give that opportunity to the coalition. Nasheed wants an MDP member to fill that slot. With the way things are, Nasheed no longer believes that a coalition government can continue”, a member told Mihaaru.

At the beginning of the week, parliamentary representative of Maafannu Central constituency Ibrahim Rasheed (Bondey) submitted an amendment to MDP’s charter stating that, if a cabinet member of a coalition government is removed over allegations of corruption and sexual assault or other crimes, whichever party the minister was representing would lose that seat.

Some members theorise that this amendment is also related to the internal dispute between the leaders of the administration.

Moreover, Maldives Trade Union stated on Wednesday night that ousting the economic minister mid-pandemic may result in losing the trust of investors during this crucial time.

Noting Fayyaz’s efforts in overcoming COVID-19’s impact on the Maldivian economy, the union asserted their support for the minister’s policies.

At least 10 signatures are required to submit a no-confidence motion against a cabinet member. According to Mihaaru, over 20 signatures have already been collected.

Once the motion is submitted to the parliament, it will pass with a majority vote of 43 members or more.

The biggest faction of the coalition government, MDP holds a super-majority in parliament, occupying 65 out of the total 87 seats, meaning that no legislation passes without MDP’s support.