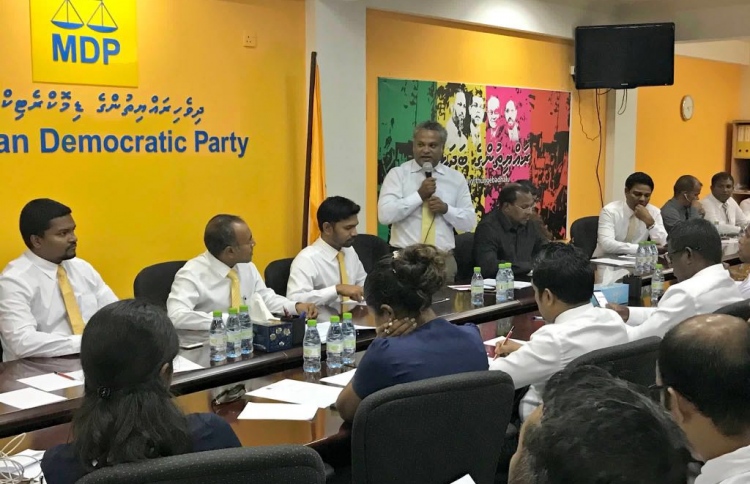 Members of opposition Maldivian Democratic Party (MDP)’s congress speaking at the meeting held on November 15, 2017 to decide on how to proceed in the presidential election slated for 2018. PHOTO / MDP

The Maldives’ main opposition Maldivian Democratic Party’s congress (MDP) decided on Wednesday to support the claim to nominate a single candidate from the opposition coalition to run in the presidential election scheduled for 2018.

MDP’s congress also supported the claim to hold a primary amongst all the members of the opposition coalition to choose the candidate who will run against President Abdulla Yameen in the upcoming election.

While MDP announced its decision to support the nomination of a single candidate from the joint opposition, religiously conservative Adhaalath Party had also announced that it would back a coalition government that supports its beliefs in the 2018 presidential election.

MDP is the only member of the opposition coalition so far to officially back the notion that was first proposed by former president Mohamed Nasheed. Jumhoory Party, which is also part of the coalition, had acknowledged the former president’s call; however, it has not announced any official decisions yet.

Meanwhile, former president Maumoon Abdul Gayoom, who is now affiliated with the opposition coalition, has said that it is “too early” to discuss such matters and refrained from commenting on the matter.

MDP also revealed that it plans on going ahead with a primary within the party, as per its charter, to decide the candidate who will represent MDP in the coalition’s selection procedure for the presidential candidate.