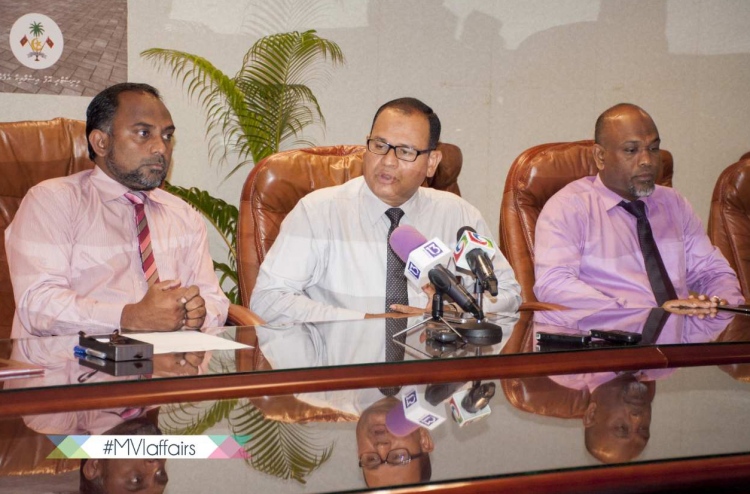 Members of the state committee, assembled to coordinate a nationwide movement to relieve the plight of the persecuted Rohingya Muslims in Myanmar, speak at press conference. PHOTO/ISLAMIC MINISTRY

The Maldivian government has initiated a nationwide movement in conjunction with private associations and media to relieve the plight of Rohingya Muslims that are facing persecution in Myanmar.

The government assembled a special committee to oversee the movement, and the committee has teamed up with the media to launch a special telethon from August 21-23.

In a press conference held by the committee Sunday, Minister of Islamic Affairs Dr Ahmed Ziyad Bagir stated that the committee will coordinate the activities to raise funds and aid for the Rohingya. He invited all associations and individuals interested in the cause to participate and make donations.

The committee also launched a special hotline, 1440, which was activated at 3:00 p.m. Sunday afternoon.

Speaking at the briefing, Minister of Defence and National Security Adam Shareef highlighted that the government of the Maldives has severed all economic ties with Myanmar earlier this month to condemn and protest the ongoing genocide of the Muslim minority. He also noted that the Maldives has called on international human rights bodies to take imperative action against what the United Nations has officially dubbed as an  “ethnic cleansing” of Rohingya Muslims by the government of Myanmar.

“The government is working to show that Maldivians stand in solidarity with Rohingya Muslims. We’re looking to establish a system that can monitor and coordinate these activities across the country,” said the minister.

“We urge all Maldivian residents to aid the Rohingya Muslims as much as each individual is capable of.”

According to the defence minister, special accounts for the cause will be opened in both Bank of Maldives Ltd (BML) and Maldives Islamic Bank (MIB). The committee will also facilitate bank deposits via mobile money transfer.

Minster Adam Shareef further assured that the telethon will be conducted with full transparency, and that the government will ensure that all the aid and funds raised in the movement are delivered to the Rohingya.

Meanwhile, local television channel Raajje TV has also commenced a telethon to aid the Rohingya, under which special fund boxes have been placed in several islands.