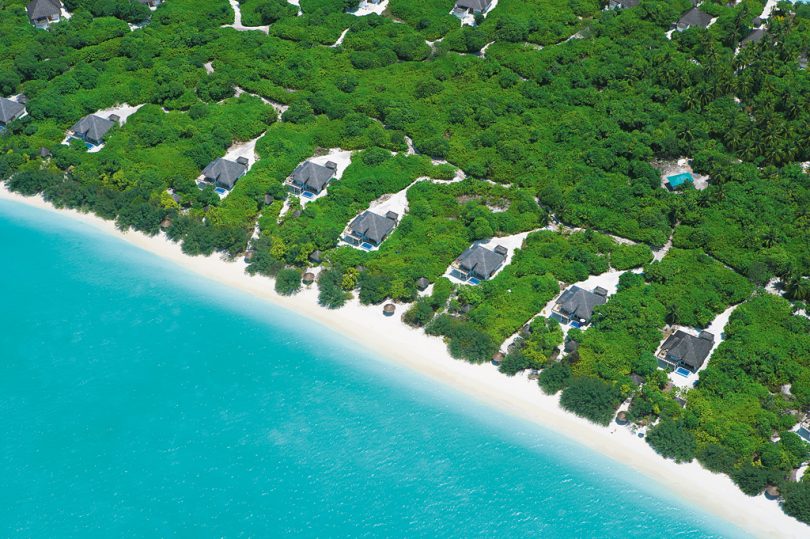 You’re my North Star when I’m lost and feeling blue,” croons Tom Waits in Little Trip to Heaven, playing on a loop in my head. It is only after two turbulent flights, with an overnight stopover in Thiruvananthapuram, that I get my first sight of the famous Maldivian blues. The North Star is holding strong in the 5.30am sky and clear turquoise waters kiss the shore as we approach the jetty from Hanimaadhoo airport. Inside a boat, we’re handed face towels, water bottles, assorted fruit slices and life jackets. None of it helps the unease that gurgles in the pit of my stomach when the boat takes off. The helmsman announces a journey time of 20 minutes and proceeds to race against what could only be the apocalypse. We split the sea in two, much like Moses the Red Sea, leaving walls of water on both sides. But all these nerves are about to be settled and how.

I’m on a typical holiday to the Maldives, a tropical nation 350 kilometres southwest of Sri Lanka famous for its uncluttered white-sand beaches, clear blue lagoons and luxurious resorts, most of which sit on private islands. There are over 1,000 islands that make up 26 coral atolls in the Maldives, which appears as but specks on the Indian Ocean on a map. 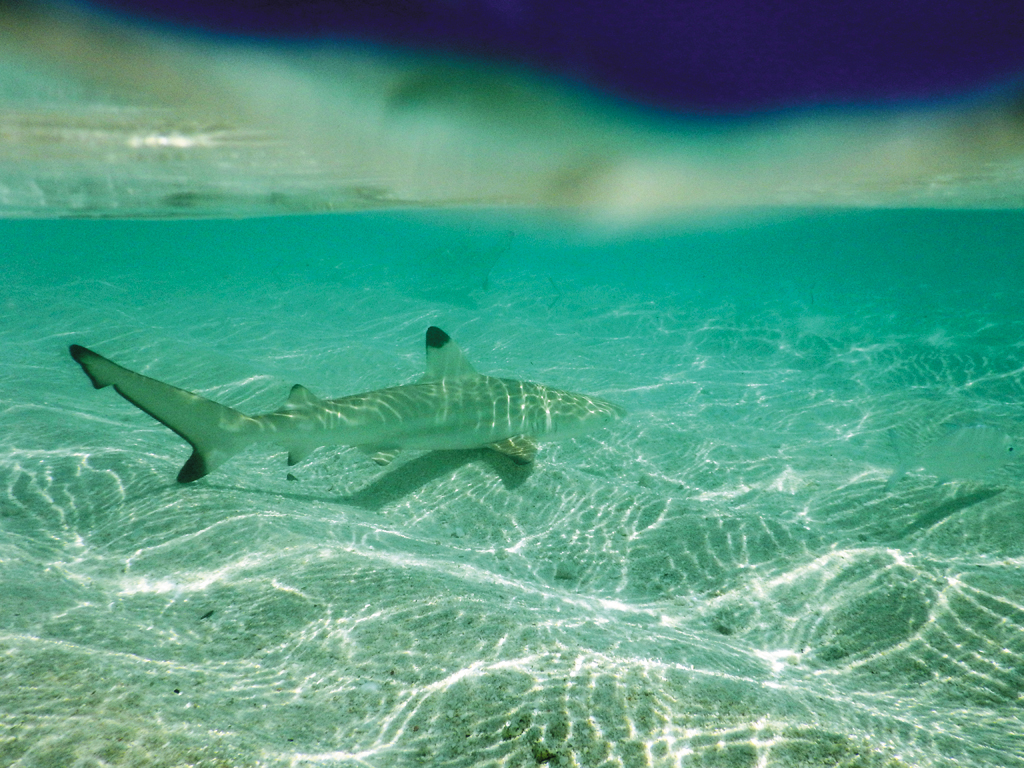 A blacktip reef shark swims in the shallows at Dhonakulhi

The stomach-churning journey to Dhonakulhi island in Haa Alifu atoll is forgotten, and dare I say forgiven, when we’re driven to the deluxe water villas of Hideaway Beach Resort & Spa, the only property on the island. It’s a shock-and-awe campaign as the buggy casually glides on to a wooden jetty from the white sands. Perched on a lagoon bustling with colourful marine life, the villas branch out into the water from the jetty like barbs of a surreal feather. Each villa is every bit as luxurious inside as it is aesthetic outside. Divided into two sections, the right side features a bed, coffee machine and TV. On the left is a Jacuzzi smack down in the middle of a space that features a walk-in wardrobe and washrooms. The theme, if any, must be air. The villa overlooks the ocean with sliding glass doors along its entire length. Open the doors and the curtains billow in ecstasy that mirrors that of my heart. The sun deck outside has beach beds and an infinity pool, azure blue as the Maldivian sky above. 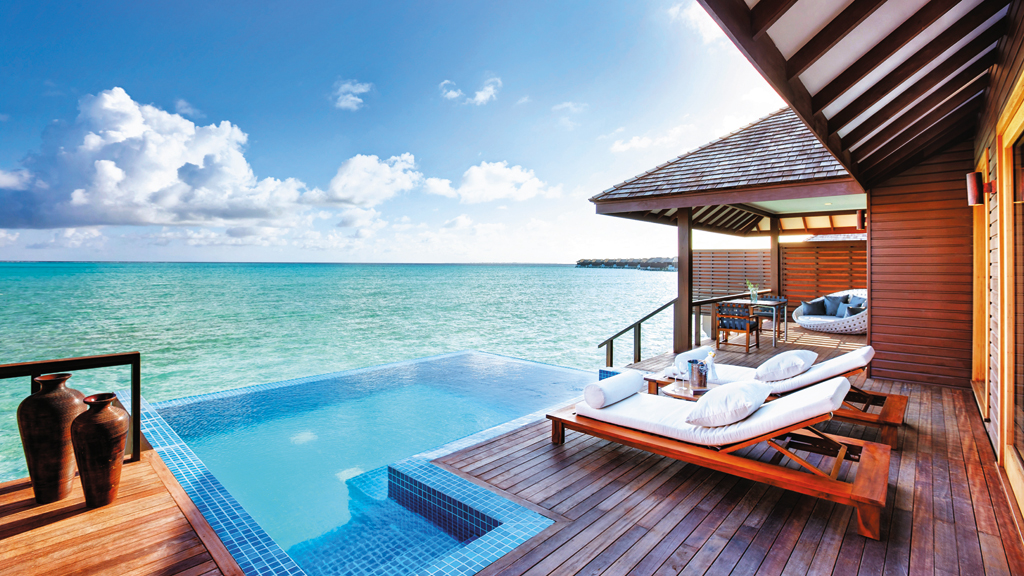 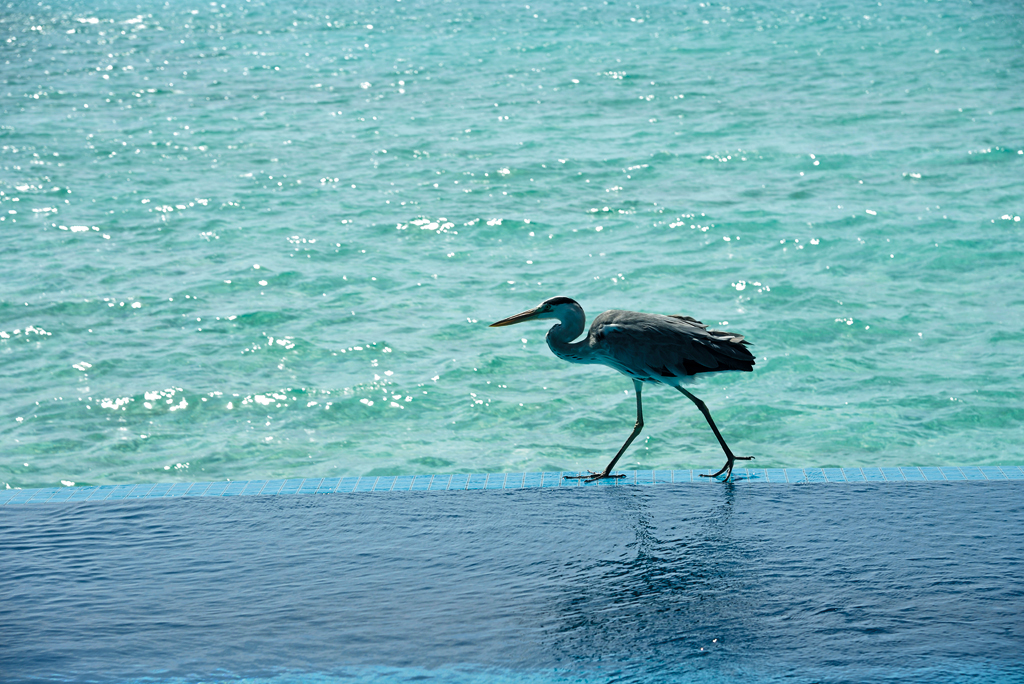 While I’m ensconced in the infinity pool’s pristine water, the ocean laps gently against the stilts on which the villa is perched. If there is a better way to enjoy the ocean without getting into it, I don’t know of it. If one does want to take a dip in the lagoon instead, there’s a ladder that lets you walk right into it. The villas are at a sweet distance from each other and partitions ensure complete privacy. Elsewhere on the island, each of the beach villas has its own private beach area to lounge at. It is this assurance of privacy that sets Hideaway apart from its competitors that are closer to Malé, says Michael Wieser, CEO of Lily Hotels Pvt Ltd which owns and operates Hideaway. At 19 years, Hideaway Beach Resort & Spa is the second-oldest premium category property in the Maldives. Earlier called Island Hideaway, the resort had 49 villas on offer. About two years ago, a complete renovation gave it its current luxe form with 103 villas to boot.

My first foray onto a beach is near Meeru Bar and Grill. I’m used to dipping my feet into ocean water and being greeted by, at worst, man-made filth at Juhu, and, at best, a gazillion sea shells in Goa. So when I’m welcomed by babies of blacktip reef sharks in the shallows, I lose it a little bit.

Over a five-course lunch that includes pizza, mushroom risotto, a glass of Pinot Noir from Marlborough and an inventive range of tropical cocktails and desserts, reservations manager Shambhu tells me that almost all the food ingredients and fruits they use are imported from Dubai. They make their way from Maldives’ capital Malé to Hideaway on an 18-hour journey onboard Dhonis, which are Maldivian boats traditionally built by the people of Kuredu Island for fishing. But the arduous acquisition never makes itself felt as we savour all manners of fresh cuisine—from amuse-bouche and thai soup to chai-pakoras—in the next few days. 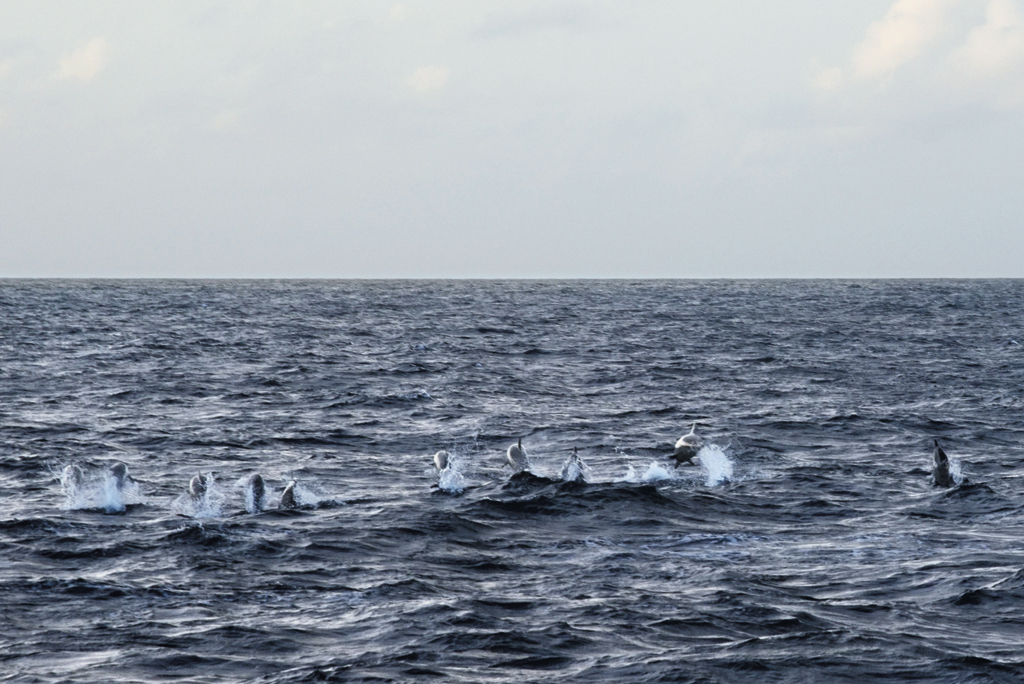 A pod of bottlenose dolphins breaches the water

Our next venture is a cruise to find bottlenose dolphins. At first, beginner’s luck seems to be a myth as our eyes scan a sea devoid of surface activity. Just as we are about to turn back, synchronised splashes appear on the horizon. The motor roars and the boat seem to fly over the choppy waves; the dolphins too march towards us. Someone once said dolphins are the dogs of the sea. Not ones to shy away from the company, these joyful marine mammals ride the bow of our boat, evoking gasps of delight as they take turns to breach the water. The only thing that could beat this experience would be to join them in the water. Someday. 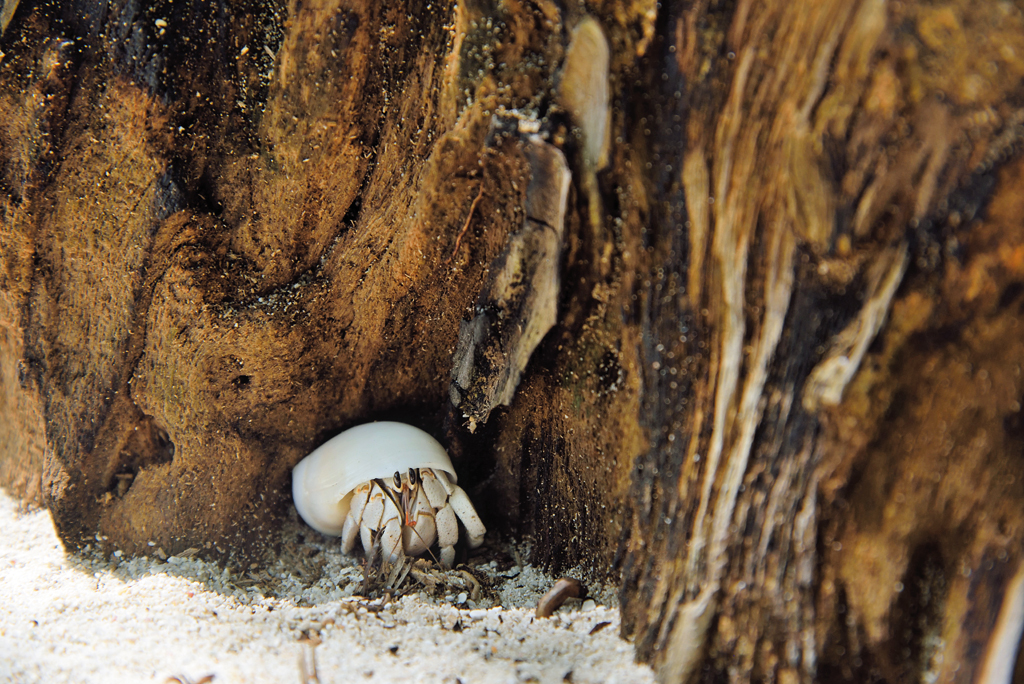 A hermit crab peeks coyly from its mobile home

As the sun kisses the watery horizon, we bid a reluctant farewell to our delightful marine friends. The boat anchors at a sweet spot for us to have a go at eco-friendly fishing. I’ve been brought up to believe this is a waiting game. That was, however, a big fat lie. As soon as the fishing rope is flung into the water, bait dangling by the hook, there are hungry tugs at it. Before I can fetch a bottle of water and unseal it, people have started pulling their catch out of the sea. In a few minutes, the basket is filled with white snappers, red snappers and a huge grouper breathing its last in wide-eyed disbelief. Shambhu gets a rather strong tug at his rope and pulls it out to find an unfortunate visitor—a baby shark. It is promptly released back into the sea, where it shall live to die another day. Shark fishing is a punishable offence here and even an accidental catch demands a quick release. 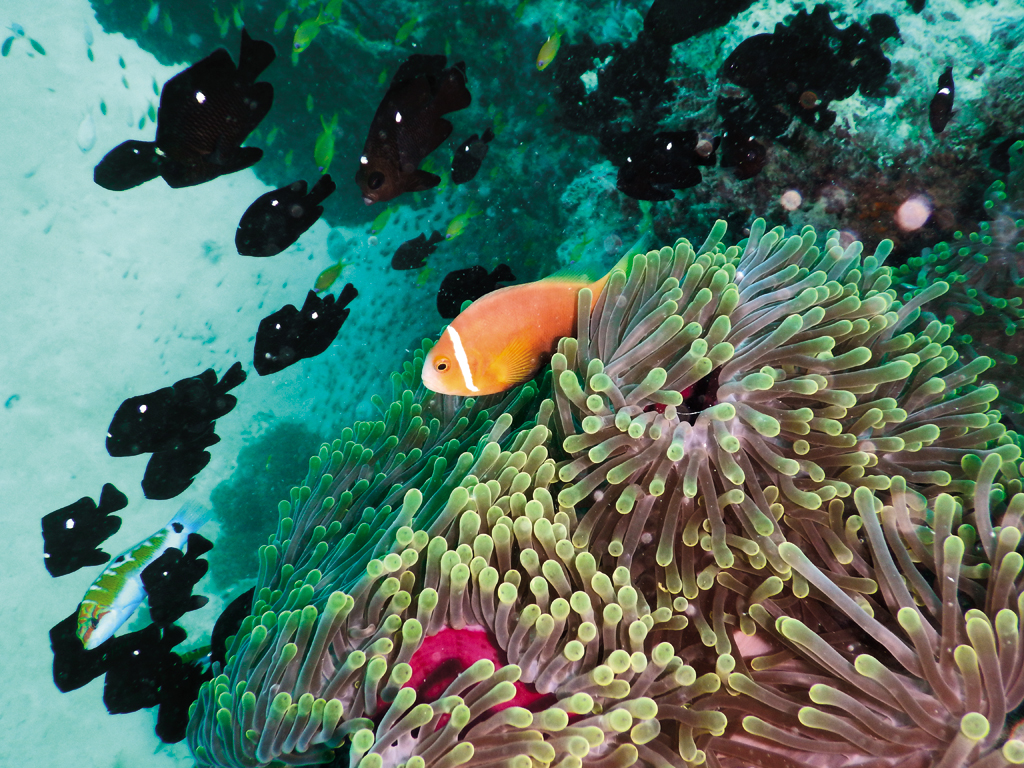 A Maldive anemonefish ventures out of its anemone

The next day has a promising line-up of activities. While the others in my troupe head to the beach for a snorkelling expedition, I get to dive 15 metres deep into the waters for a more intimate encounter with the marine life, thanks to my PADI certification. Alongside Yuko, a dive instructor at Meridis Dive Centre, I discover a variety of fish in a 30-minute dive including oriental sweetlips, Kashmir and humpback snapper, Maldive anemonefish, bluefin jack, orange anthias, black-saddled coral grouper, regal angelfish, butterfly fish, Moorish idol, wrasse, powder blue surgeonfish, guineafowl pufferfish and bridled parrotfish. There are five other dive sites in the vicinity, some of them known for their sightings of giant manta rays in the right season. 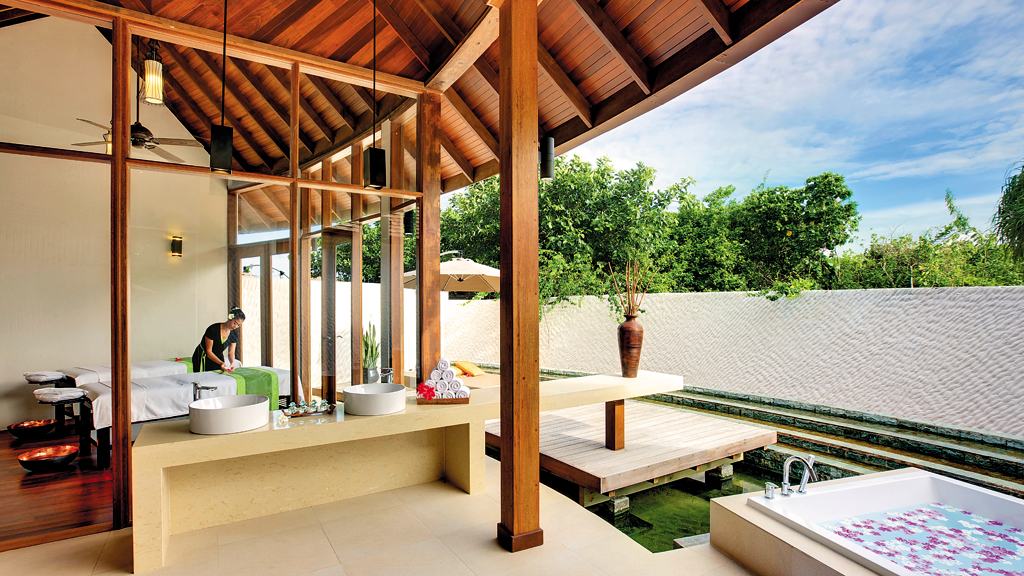 To soothe my muscles, tense with the adrenaline of deep-sea adventure, I head to Hideaway Spa. My weary senses are greeted with ginger tea and an assortment of four oil options—Heaven, Kinetic, Equilibrium and Sublimation, named after the experiences they offer. My masseuse, Tari, hails from Bali and specialises in the long back strokes typical to Balinese massages. A few minutes into the massage, every ounce of stress is released from the body, and I’m struggling to stay awake. A masseuse once told me that if a massage puts you to sleep, it is her greatest compliment. Tari must have felt thoroughly complimented. After the designated 30 minutes, she wakes me up out of a partial slumber. The dive is forgotten, at least by the body. It’s no surprise that Hideaway Spa was recently adjudged the Best Luxury Beauty Spa in the Indian Ocean at the World Luxury Spa Awards. I make a mental note of trying out their signature therapies. 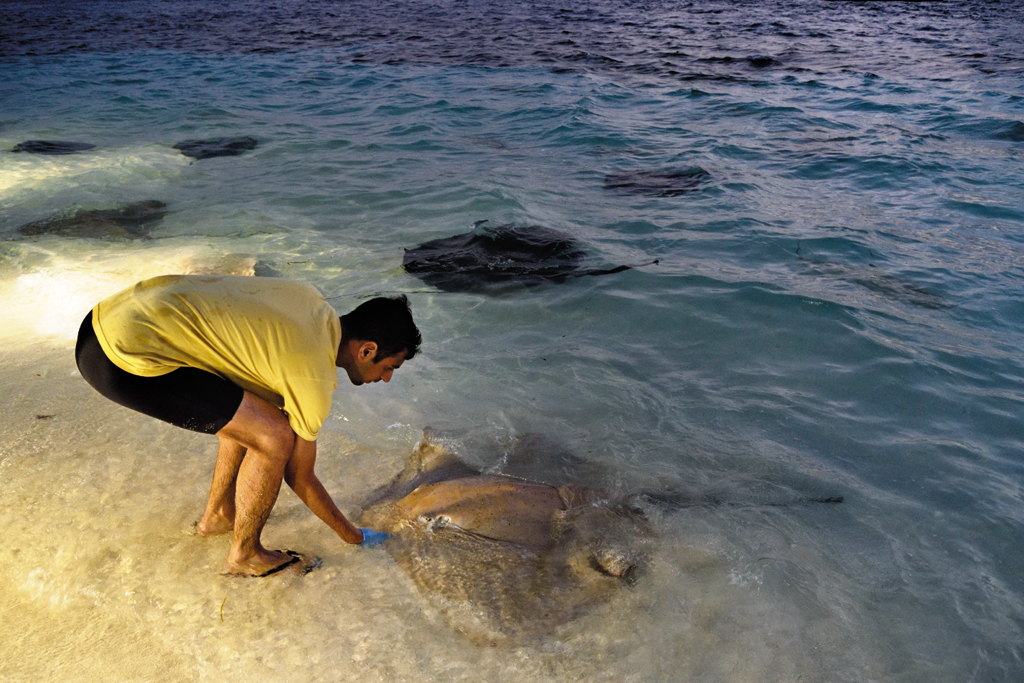 In the evening, I visit Meeru Bar to have the most memorable encounter of my trip. The blacktip reef sharks have been joined in the shallows by stingrays and blue jackfish, all of which are being fed fish meat by tourists. I’m told this is a bi-weekly ritual. My only encounter with a stingray before this was during a dive in the Andamans when I circled a baby ray hiding on the sea floor. So when a four-feet-long stingray approaches me on the beach without caution and sucks fish carcass out of my hands, I lose it a bit again.

When dusk falls, I find myself biking on the moonlit white sand, delirium perched on the pillion. The crescent-shaped island is nearly 1.4 kilometres in length and 500 metres in width, and just eight percent of its area has been built upon. I still manage to get lost amidst the coconut groves on my way to the northernmost point of the island, unimaginatively christened North Point. Here, a sandbank sits submerged. On the surface, it looks like any other part of the night sea that scatters the moon, but the sandbank beneath allows me to walk 250 metres into the sea, the water barely kissing my waistline.

The Haa Alifu Atoll, northernmost in the Maldives, is made up of 43 magical islands, but it is best known for Utheemu. A small island with fewer than 1,000 inhabitants, Utheemu is the birthplace of Sultan Muhammad Thakurufaanu, a legendary figure among the locals. He is said to have defeated Portuguese invaders in 1573 with the help of his brothers and a small, motley crew sailing on a single boat. We visit this revered legend’s humble wooden palace as a day trip and are inundated with tales of his heroics. The Maldivians sure know how to sell, err tell, their history.

On my last evening at Hideaway, I drive a jet ski and kayak into the ocean for the love of thrill. Over dinner, locals among the Hideaway staff perform Boduberu, a traditional music and dance performance reserved for weddings and religious festivals. Before we leave the picturesque shores, we make one final foray into the water onboard a boat called Penguin that has a glass-walled basement which accommodates four people at a time and lets them enjoy the reef without getting wet. There are no new encounters for me and it doesn’t give me the heady feeling of being a part of fish schools like a dive does, but it does help me bid adieu to my pouting underwater friends.

It’s time for a few connecting flights home but the euphoria of the Maldives should last long enough to keep jet lag at bay. On the return journey, Tom Waits’ song doesn’t sit well with me. I’m not sure where the association of blue and sadness originates; melancholy has many shades in my head. But, after a few days in the Maldives, blue certainly isn’t one of them.