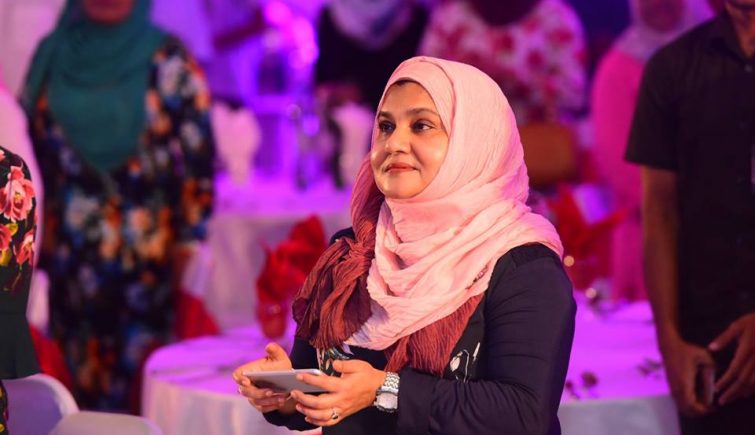 The original Dhivehi article was published on Vaguthu.com website on 21st March 2017. By Musharraf Hassan
The following is a loose translation:

In most countries, the first lady or the president’s wife is someone who is on the frontline with campaigning the moment the husband starts contesting. Especially in big democratic nations.

However, the idea of receiving first lady’s help is something new for Maldivians. The reason is that the role of the first lady in the Maldives was hidden away. The first lady’s service that this generation witnessed, was not seen publicly. These first lady’s “services” were securing high posts for their brothers and sisters.

However, when President Abdulla Yameen Gayoom took office, the scene changed. The President’s wife Fathimath Ibrahim (also referred to as ‘Fathun’ in short) focussed not on warming up the seat next to the President’s. Instead, she set up a campaign office and shook awake the sleeping PPM campaign. Even today whoever looks back with a telescope can see that it was Madam Fathun who drove the PPM campaign in top speed and defeated MDP’s plans in the vote.

When President Abdulla Yameen was finally elected, Madam Fathun’s activities increased tenfold, from every corner and every direction this was visible. Day after day her work were seen to be increasing.

She took the lead to increase members for the government’s party and socially, helped out the special needs, also kept on citizen’s welfare in check. However, the criticisms Madam Fathun faced were no less and that is not surprising.

When a woman is active, where there are no opportunities for women, voicing out for women and conducting women’s activities in a difficult community such as this, will certainly face criticisms.

As Madam Fathun’s work strengthens the direct attacks targeted to her will also increase from those who opposes President Yameen and his policies. This is how things are in a political arena. This is the truth of politics.

Nonetheless, it is actually not an issue when a first lady engages in political and social work. That is how things have been going even before. Look at the life of US President Roosevelt’s wife Eleanor Roosevelt.

During the ‘Great Depression’ and during World War II, Eleanor Roosevelt was the First Lady for 12 years. During those times she took initiative to organise press conferences and defended government policies. She engaged in discussions with her husband and gave advice on many different issues. Even after her husband’s death nationally and internationally she continued with her service. For that reason, Eleanor Roosevelt became the ‘world’s most admired woman’.

Former First Lady’s of the US Abigail Adams, Jacqueline Kennedy, Hillary Clinton, Michelle Obama and Barbara Bush showed to the world that the first lady isn’t just a name and a title, neither is it just participating in few social gatherings.

Those personalities showed us along with the position of the first lady comes with its responsibilities and duties.

Today what we are witnessing from the Maldives’ First Lady Madam Fathun’s actions is that first lady post is not only for the name and title. So for that kudos to you, Madam Fathun.