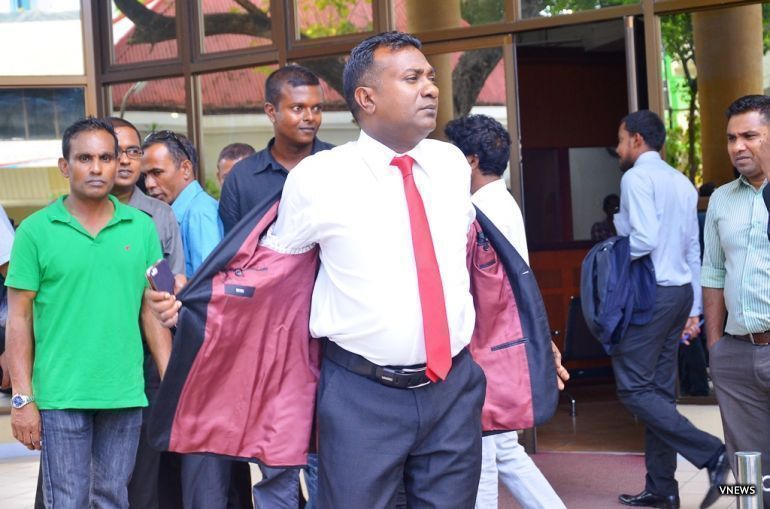 The original Dhivehi article was published on Avas.mv website on 30th March 2017.
The following is a loose translation:

From Dhiyana’s tweet, it wasn’t clear who the ‘Aiminabi’ and ‘Hassanthakuru’ was among the couple, a wise person would understand it, though.

Dhiyana who also held the post of Attorney General has a background of opposing the government, this is something she has been doing continuously, and so is not something new.

Now she keeps barraging with words at President Abdulla Yameen’s government. Nothing seems good for her. Come any government her husband Abdulla Jabir also keeps on changing his political stance.

However, after getting arrested upon being tested positive for alcohol in the urine sample taken at the Hondaidhoo island incident and subsequent release from prison, it seemed like he left the scene to focus on his businesses. While away from the scene, from time to time he had made tv appearances and praised so profusely that a viewers are left mouth agape and dry in awe.

Last October he said in one of his tv appearances that the only President with the courage to fight against corruption is President Yameen. He will give up everything to elect President Yameen as PPM’s candidate in the next election. Even recently he poured over words of praise in a similar fashion.

Things being like that, one week back when President Nasheed who is hiding from the prison sentence, tweeted with words to the effect of declaring war against Maldives Inland Revenue Authority (MIRA)’s Commissioner General, one media reported of Jabir’s furious blast over a matter.

Based on that interview, Jabir was livid when MIRA froze Yacht Tours Bank accounts over outstanding dues. He noted in the interview that President Yameen is not the person he used to know. Which is very true. Back then he was Abdullah Yameen and now he is the President. It is a big issue if Jabir can get away without paying back the millions of dollars he owes to the nation with words of praise.

Jabir is not new to Maldives’ court systems and to MIRA. In 2012 over nonpayment of 7 million dollars, J Resort Alidhoo and J Resort Kuda Rah lease permit got cancelled and Ministry of Tourism sent notice. Based on MIRA’s figures during MDP government, Jabir absconded payment for a long period.

In 2015 over nonpayment of J Resort Alidhoo lease, MIRA took action. Based on documents for ease of overdue settlement instalment payment arrangements were also made possible.

A huge amount of unsettled payment over Haa Alifu Atoll Beenafushi island leased for resort development is also known. It is not just resorts. In 2014 from a company Jabir has shared, owed 700,000 rufiyaas to Himmafushi Council, he was summoned to the Police for the non-payment.

So Jabir can be regarded as someone who holds a bad record over owing money to the nation.

What was surprising was when MIRA took action over non-payment of millions of dollars to the nation, disregarding the revered status of the citizen’s rights, President Nasheed took a threatening tone against MIRA’s employees, on behalf of Jabir. Nasheed also formed United Opposition coalition with ex-Vice President Ahmed Adeeb, who committed Maldives’ biggest ever corruption scandal embezzling citizens money.

Nasheed tweeted that MIRA will be made answerable and that MIRA has become a political tool. Following Nasheed’s tweet, no accusation was left missing by MDP activists and active members in the front line of the party, against MIRA.

The problem is MIRA. Is it Yazeed? Debt or lease money owed to the nation, isn’t it owed by the Jabir’s company? Even though impeachment failed, censure vote against Speaker of the parliament was submitted to fool the citizens, when they knew that MIRA will take action against those who owes to the nation.

Jabir has also mentioned accusations made against him of spending money to buy votes to impeach the Speaker of the parliament Abdulla Maseeh. Lawmaker Ahmed Faris Maumoon said everyone knows that the 42 lawmakers in the parliament are not devoid of money and so cannot be swayed.

So there is a reason to believe they reached the stage for taking a vote after receiving money to be distributed.