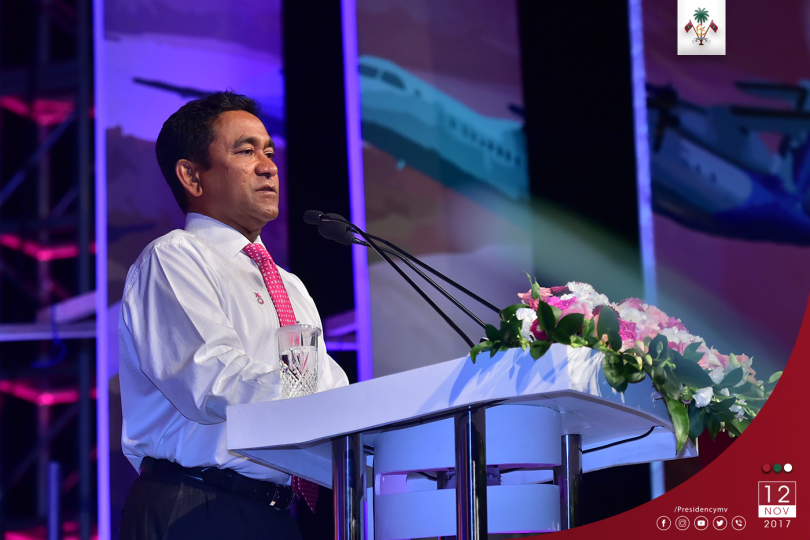 Stating that an airport was the backbone of any economy, President Abdulla Yameen Abdul Gayoom has proclaimed that flights will land at the Kulhudhuffushi Airport, soon to be developed, before the end of August next year. The President made this remark while speaking at the function organised by the Progressive Party of Maldives (PPM) in Kulhudhuffushi Island of South Thiladhummathi Atoll.

The President is currently on a tour of Kulhudhuffushi, where he inaugurated the land reclamation project for Kulhudhuffushi Airport development, and Mahaa Jarraafu dredger earlier today.

Speaking at the function this evening, President Yameen stated that the determination of this administration has proved that we are able to achieve targets previously seen as far-fetched by others. He also called upon everyone to chase their own dreams with courage, honesty and determination.

Moreover, the President stated that our prosperity was in our own hands, and appealed for the people’s cooperation and support to the administration in every endeavour. He also said that international airports in Thiladhummathi Atoll that would act as the main gateway to the country’s Northern region would boost the region’s tourism industry, and result in a more thriving economy.

Furthermore, President Yameen highlighted that current statistics show that resort development of 1500 bed capacity, to be completed in the near future, will add to the economic development plans targeted for the Kulhudhuffushi region. He also underscored that this would, in turn, create around forty thousand new jobs in the area.