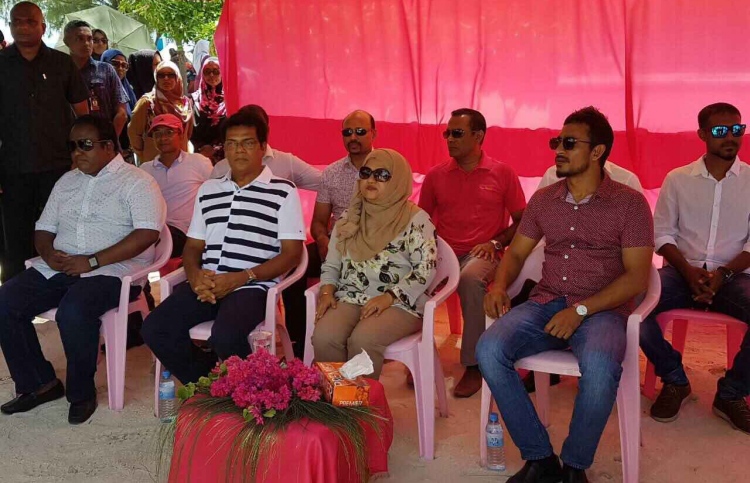 The inauguration of the campaign was held in Meedhoo – a part of the Maduvvari constituency in Raa Atoll. The first lady was joined by the deputy speaker of the parliament Hulhu-Henveiru MP Moosa Manik, Inguraidhoo MP Ibrahim Falah and several other government parliamentarians.

However, MP Falah noted that the trip was very much a social visit for Fathimath, and she had taken the initiative to schedule visits to local homes to get a first hand experience of what the residents want.

“My fellow MPs and I are going to be hard at work campaigning for the Maduvvari by-election, and also for the upcoming presidential election in 2018. But more immediately, we’re getting set to secure the Madduvari seat for PPM,” Falah said.

Whilst the ruling party commenced its campaign for the Maduvvari constituency, it has not declared who will be contesting for the seat on behalf of the party. If more than one candidate decides to contest for the constituency within the ruling party, it will need to hold primary elections as well.

Former PPM candidate MP Mohamed Ameeth had initially won the seat for the constituency. However, after the apex court issued a controversial anti-defection ruling in July, the Elections Commission had announced by-elections for six constituencies, including Maduvvaruri.

The Supreme Court’s anti-defection ruling stated that any member that resigns or is expelled from the political party they were registered to at the time of election, or if the member shifts to another party, they will lose their seat in the parliament. The court had later explained its verdict and stated that it cannot be applied retroactively.

Ameeth, along with three other MPs, had contested their removal from the parliament at the Supreme Court, and the matter is still in dispute, with the court giving an ambiguous verdict when the MPs appealed.

The court simply upheld its previous decision, and the allegedly-ousted MPs have since asked the court to clarify its verdict.

The opposition maintains that the members did not lose their seats and that the Election Commission does not have the jurisdiction to announce by-elections yet. Therefore, the opposition claimed that campaigning for these constituencies, at the current state, would be irrelevant.