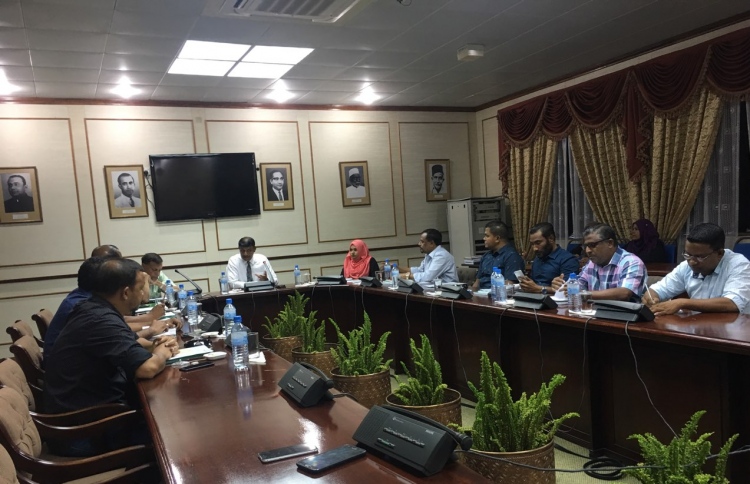 Members of the Committee on Oversight of the Government hold meeting to discuss the government’s controversial flat distribution from its first social housing project. PHOTO/MIHAARU

Parliamentary Committee on Oversight of the Government has issued a five-day period for the Ministry of Housing and Infrastructure to inform the committee how the government had distributed flats from its first social housing project.

Over 15,000 people had applied to buy flats from the government’s first housing project in reclaimed suburb Hulhumale in 2014. While the housing ministry had finally announced 661 applicants who are confirmed to receive flats after nearly four years, its decision to withheld the identities of the recipients or how points were allocated for applicants had sparked public outrage as people called foul on flat distribution.

Following a petition lobbied to the parliament to probe the issue for corruption, the government oversight committee held a meeting Wednesday to deliberate. Government aligned lawmakers had initially opposed the motion, pointing out that the case is already being investigated by the Anti-Corruption Committee and housing ministry; however, they changed their minds later.

The ten members who took part in the committee meeting ultimately agreed to issue a deadline, September 25, for the housing ministry to divulge information on how points were allocated and recipients selected for the flats.

Speaking at the meeting, Maafannu West MP Mohamed Falah stated that the lack of transparency in the procedures used for flat distribution raises flags, and thus must be investigated.

Maradhoo MP Ibrahim Shareef also assured that the objective of the probe is not to seize back the flats from any of the currently confirmed recipients. The sentiment was echoed by Kendhoo MP Ali Hussain, who stressed that the highest priority is to confirm that the first batch of recipients are truly those in most dire need of housing.

The committee’s chair, Vilufushi MP Riyaz Rasheed, vowed that the committee will do everything within its power to obtain the information for the parliament.

While the public is in uproar with claims of injustice and corruption involved in flat distribution, Housing Minister Muizzu has firmly assured that the verification and distribution procedures were carried out fairly. He has repeatedly declared that the ministry decided to withhold information of recipients to protect the rights of both those who received flats and people who did not.

However, the minister resolutely remains silent on how points were awarded to applicants, which has given rise to rumours that flat recipients were handpicked and that flats have been given to some recipients that received low points.