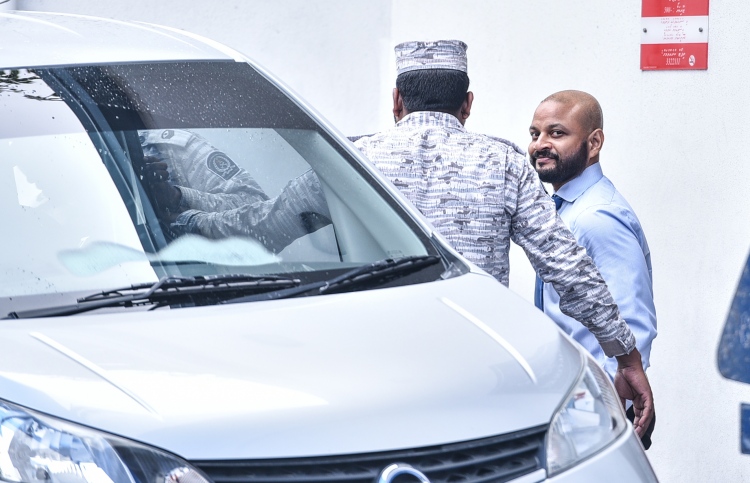 Dhiggaru MP Faris Maumoon escorted back to jail after a hearing at the Criminal Court. PHOTO: HUSSAIN WAHEED/MIHAARU

The state prosecution admitted on Monday that the investigation into the bribery charge against Dhiggaru MP Faris Maumoon has not revealed any specific dates on which the opposition lawmaker had allegedly offered bribes to parliamentarians.

The lawmaker son of former President Maumoon Abdul Gayoom has been charged with offering bribes to parliamentarians to garner support for the opposition lobbied censure motion against the parliament speaker.

In response to an inquiry by MP Faris during the preliminary hearing of his trial at the Criminal Court, Prosecutor Aishath Mohamed declared that an anonymous lawmaker has testified in the investigation to having been offered a bribe by MP Faris. Withholding the lawmaker’s identity as per their request, Prosecutor Aishath Mohamed claimed that while the investigation did not reveal a specific date, the bribe was offered sometime after April 10.

The state further admitted that the exact amount offered by MP Faris remains unclear for now. However, the prosecution declared that the information will be revealed in the questioning and testimonies of witnesses during the trial.

MP Faris countered that there is confusion over the exact date of his allegedly offered bribe because the crime never occurred. His lawyer, Maumoon Hameed, added that the confusion indicates lack of sufficient investigation into the case. However, as the Criminal Procedure Act stipulates defendants to respond to charges during preliminary hearings, MP Faris denied the bribery charge against him.

The prosecution has put forward four secret witnesses against MP Faris, three of whom are policemen that searched Faris’ residence and the fourth is the lawmaker claiming to have been offered a bribe. Prosecutors further claim to have incriminating text messages sent by Faris, and a recording of a phone call he made with Ahmed Shafiu, a member of opposition Jumhoory Party, who had been arrested under the same accusation.