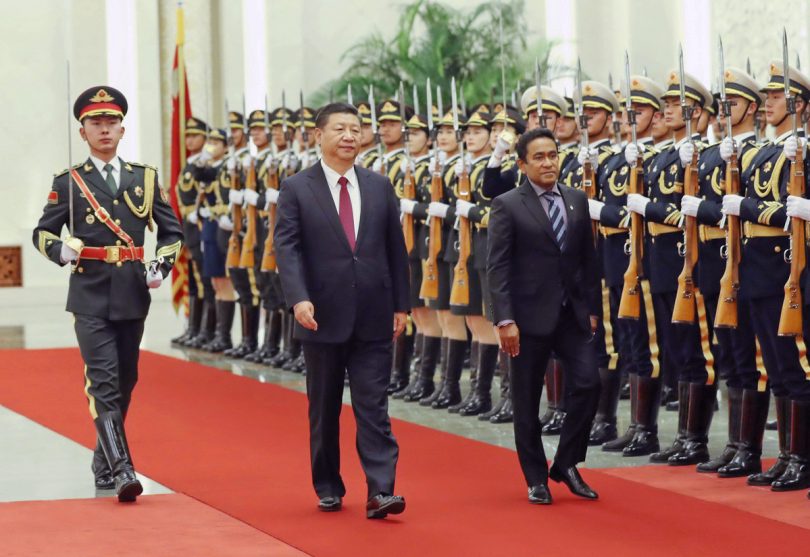 President Xi Jinping and Maldives President Abdulla Yameen review an honor guard before their talks at the Great Hall of the People in Beijing on Thursday. The two also witnessed a dozen documents being signed. LIU WEIBING/XINHUA

China and the Maldives signed 12 documents, including a free trade agreement, to boost cooperation in such areas as economy, health, infrastructure and finance on Thursday.

The agreements and memorandums of understandings were signed as President Xi Jinping and visiting Maldives President Abdulla Yameen witnessed while at the Great Hall of the People in Beijing.

According to the documents, the two countries will enhance cooperation on jointly developing the Belt and Road Initiative.

The two countries should seize the opportunities of signing the free trade agreement and the memorandum of understanding on jointly working on the Belt and Road Initiative, invigorate bilateral economic and trade cooperation, push forward cooperation on major projects and promote investment, finance and maritime cooperation, Xi said.

China hopes that the Maldives will continue to support regional cooperation with South Asian countries to promote the region’s prosperity, Xi said.

Since establishing diplomatic relations 45 years ago, the two countries have treated each other equally, cooperated for win-win outcomes and supported each other on issues related to their core interests, Xi said.

During the meeting, Xi expressed gratitude for Yameen’s congratulatory letter on the success of the CPC’s 19th National Congress and his re-election as general secretary of the CPC Central Committee.

Noting his government attaches great importance to its relations with China, Yameen said the countries could enhance cooperation on the Belt and Road Initiative.

It is of great importance for China to set Xi Jinping Thought on Socialism with Chinese Characteristics for a New Era as an action guideline of the CPC Central Committee, he told Xi. “I am confident under the guidance of the CPC Central Committee with your excellency as the core, the Chinese people will move forward to achieve your centenary goals and build China into a great modern socialist country,” he said.

Noting that China has been the largest source of tourists to the Maldives over the past seven years, Li said the two countries have great potential to cooperate in tourism.

China is willing to strengthen cooperation in areas of building infrastructure, civil aviation, trade and marine research, as well as in efforts to deal with climate change, Li said.